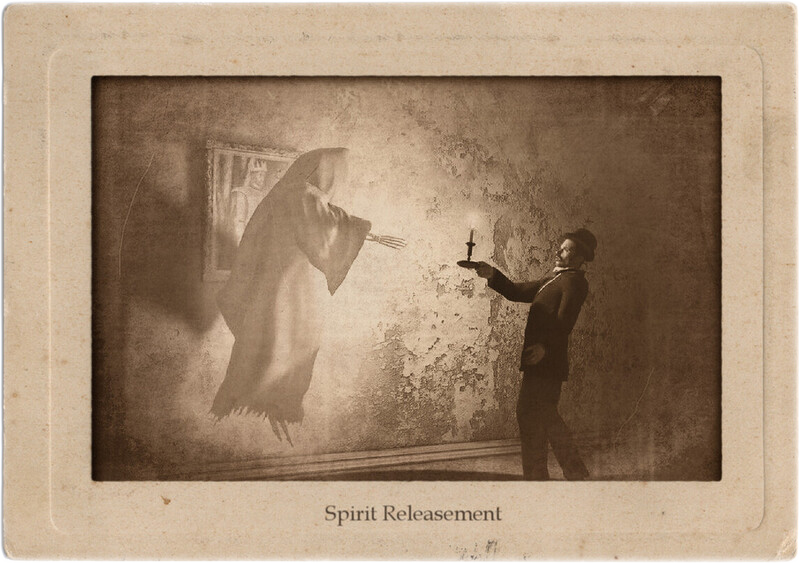 Spirit releasement is a contemporary term for an Exorcism of an earthbound spirit or a discarnate being attached to a place or person. Spirit releasement refers primarily to exorcisms that have no religious elements and are not performed by clergy.

Forms of releasement are practiced the world over. Spirits have long been blamed for causing virtually all ills and bad luck, and they are routinely exorcised. In the early days of Spiritualism, people suffering from unusual mental symptoms often attended Séances in hopes of having “low” spirits exorcised.

Spirit releasement has become increasingly popular together with the growth in past-life therapy. Some pastlife therapists say their clients have attachments relating to past lives. Edith Fiore, a past-life therapist, began recognizing and releasing, or “depossessing,” attached entities in the 1970s. Dr. William Baldwin began studying releasement in 1980 and developed techniques, now used by many practitioners, published in his book Spirit Releasement Therapy: A Technique Manual (1991). Baldwin left his practice of dentistry in 1982 to work full time with his wife, Judith Baldwin, in spirit releasement, past-life related problems and extraterrestrial contact. The Baldwins founded the Center for Human Relations and are co-directors of the Association for Spirit Releasement Therapies. They trademarked the term Spirit Releasement Therapy.

In contemporary spirit releasement, a practitioner, working with one or more spirit guides who act as facilitators, makes mental contact with a spirit who is haunting a site and causing a disturbance or who is attached to a person. Often, this is an earthbound soul who does not know he or she is dead, or is bound to the earth plane by unfinished business.

Practitioners say that simply finding out the entity’s “story,” that is, its life and death and perhaps unfinished business, is often sufficient to send the spirit on its way to the next world. The entity is engaged in dialogue and persuaded to depart. The transition is marked by the appearance of white light, and the spirit is urged to move toward the light. Sometimes the earthbound spirit has to be coaxed or convinced to move on. Sometimes it is led away by helping spirits that appear. These helping spirits include angelic beings, other spirits of the dead whom the earthbound once knew in life, or the spirits of animals with whom the earthbound had strong emotional attachments, such as a pet.

Following releasement, patients often report feeling lighter and better and say they experience a cessation of troublesome conditions. The departing spirits do not return, but patients are advised on how to protect themselves from future invasions by other spirits. Spirit releasement can be carried out on a long-distance basis as well.