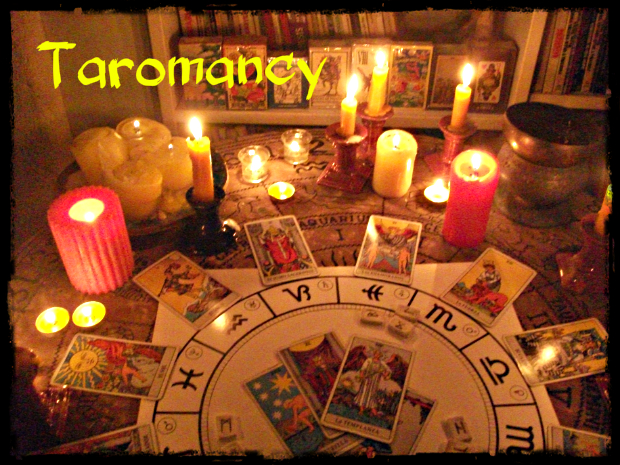 Taromancy or Tarotmancy is the art of divination through the use of Tarot cards.

Derived from the English tarot and Greek manteia ('prophecy')

According to the manuscript of Martiano da Tortona before 1425, tarot cards were created for playing games. Tarot cards were not associated with mysticism and magic until the 18th and 19th centuries.

The first taromancy occurred in Bologna Italy during 1750. The modern divinatory tarot began in 1781 when Antoine Court de Gébelin published Le Monde Primitif, a study that includes religious symbolism in the modern world. De Gébelin claimed that that the symbolism of the Tarot de Marseille represents the mysteries of Isis and Thoth.

The usage of tarot cards in divination was further developed by Eliphas Lévi. Lévi introduced an interpretation of the cards which are related to Hermetic Qabalah by publishin Dogme et Rituel de la Haute Magie in 1854.

From 1910, tarot divination became popular due to the publication of the Rider-Waite-Smith Tarot that replaced the traditional cards with symbolic scenes images.

A deck of these special cards, called tarot cards, consists of a total of 78 cards, 22 of which are referred to as the major arcana. The remaining 56 cards consist of four suits of 14 cards each and are referred to as the minor arcana. Each card is unique and can have a different meaning depending on the order in which it is drawn and which direction the card is facing.

Minor Arcana: The Minor Arcana closely match Anglo-American playing cards, having Ace-through-Ten and four face cards. The face cards are Page, Knight, Queen, and King. Each suit of the Minors corresponds to one of the four Alchemical Elements. Pentagrams correspond with Earth, Swords with air, Wands with fire, and Cups with water. The Face cards also correspond to the Elements. The Page is Earth, the Knight is Air, the Queen is Water, and the King is Fire. This makes the Page of Pentagrams (or Earth of Earth), the Knight of Swords (or Air of Air), the Queen of Cups (or Water of Water) and the King of Wands (or Fire of Fire) very strong cards.

Major Arcana: The Major Arcana are a set of usually twenty-two cards, sometimes numbered zero to twenty-one(though this depends on whether or not the specific author/artist included the Fool as a numbered card or not) , with no suit. There are usually many more elements in the images specified by the literature for this set of cards. These cards are often interpreted as describing the normal progression of a truly holy life and often tell where a person is along their journey, or if they have strayed. Such an interpretation is called the “Fool's Journey” and it originated with Eden Gray.

Spreads: To perform a Tarot reading, the Tarot deck is typically shuffled by either the subject or a third-party reader, and is laid out in one of a variety of patterns, often called “spreads”. They are then interpreted by the reader or a third-party performing the reading for the subject. These might include the subject's thoughts and desires (known or unknown) or past, present, and future events. Generally, each position in the spread is assigned a number, and the cards are turned over in that sequence, with each card being contemplated/interpreted before moving to the next. Each position is also associated with an interpretation, which indicates what aspect of the question the card in that position is referring to. Sometimes, rather than being dealt randomly, the initial card in a spread is intentionally chosen to represent the querent or the question being asked. This card is called the significator.

Some methods of interpreting the tarot consider cards to have different meanings depending on whether they appear upright or reversed. A reversed card is often interpreted to mean the opposite of its upright meaning. For instance, the Sun card upright may be associated with satisfaction, gratitude, health, happiness, strength, inspiration, and liberation; while in reverse, it may be interpreted to mean a lack of confidence and mild unhappiness. However, not all methods of card reading prescribe an opposite meaning to reversed cards. Some card readers will interpret a reversed card as either a more intense variation of the upright card, an undeveloped trait or an issue that requires greater attention. Other interpreters point out that card reversal is dependent on the order of the cards before shuffling, so is of little bearing in the scope of a reading.