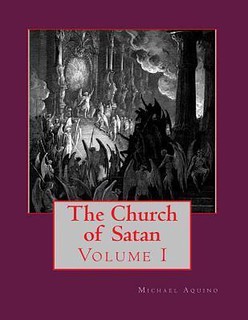 As a religious institution consecrated by and literally acknowledging the Prince of Darkness, the Church of Satan enjoyed an inspiring, and occasionally either thrilling or terrifying, existence from 1966 to 1975. Beginning as a whimsical and satirical countercultural statement against the social and institutionally-religious hypocrisy of the 1960s, the Church gradually evolved into a positive, sincere, and [to its own surprise] virtuous organization, though not without periodic individual and group growing pains: the consequence of allegiance to a supernatural entity only dimly apprehended and understood by Western Judæo-Christianized civilization.

From its 1979 1st Edition to this 2013 8th, The Church of Satan remains the only complete documentary history of that fascinating and bizarre adventure, from Anton & Diane LaVey’s founding of the Church in their San Francisco home to its surprising dissolution into a secular business a decade later and metaphysical supersession by the Temple of Set.

Called “The Black Pope” by many of his followers, Anton La Vey began the road to High Priesthood of the Church of Satan when he…

The late Anton Szandor LaVey, founder of the Church of Satan, may be the most notoriously familiar for his Satanic Bible, but The Satanic Witch…

The Temple of Set has as its avowed mission the destruction of the power of organized religion in contemporary society. Michael Aquino,a lieutenant in U.S.…

Satan's number is six, six being the number of “the beast” representing mans carnal nature being set free. Releasing the wolf within if you want…

In 1966, Anton LaVey introduced to the world the Church of Satan, an atheistic religion devoted to the philosophy of individualism and pitilessness often associated…