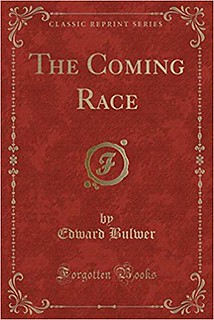 “As I drew near and nearer to the light, the chasm became wider, and at last I saw, to my unspeakable amaze, a broad level road at the bottom of the abyss, illumined as far as the eye could reach by what seemed artificial gas lamps placed at regular intervals, as in the thoroughfare of a great city; and I heard confusedly at a distance a hum as of human voices.…”

Edward Bulwer-Lytton’s The Coming Race was one of the most remarkable and most influential books published in the 1870s. The protagonist, a wealthy American wanderer, accompanies an engineer into the recesses of a mine, and discovers the vast caverns of a well-lit, civilized land in which dwell the Vril-ya. Placid vegetarians and mystics, the Vril-ya are privy to the powerful force of Vril―a mysterious source of energy that may be used to illuminate, or to destroy. The Vril-ya have built a world without fame and without envy, without poverty and without many of the other extremes that characterize human society. The women are taller and grander than the men, and control everything related to the reproduction of the race. There is little need to work―and much of what does need to be done is for a novel reason consigned to children.

As the Vril-ya have evolved a society of calm and of contentment, so they have evolved physically. But as it turns out, they are destined one day to emerge from the earth and to destroy human civilization.

Bulwer-Lytton’s novel is fascinating for the ideas it expresses about evolution, about gender, and about the ambitions of human society. But it is also an extraordinarily entertaining science fiction novel. Sir Edward Bulwer-Lytton, one of the great figures of late Victorian literature, may have been overvalued in his time―but his extraordinarily engaging and readable work is certainly greatly undervalued today. As Brian Aldiss notes in his introduction to this new edition, this utopian science fiction novel first published in 1871 still retains tremendous interest.

Dedicated to the rebirth of Aryan/Teutonic supremacy, the resurrection of Nordic mysticism, and the defeat of Christianity, the Thule Society prepared the path for the…

Eliphas Levi (1810–1875) French occultist who was a leader of the occult revival of the 19th century. Eliphas Levi has often been called the last…

The present mansion of Knebworth House replaced an older house begun in the last decade of the fifteenth century, its mainly Elizabethan fabric dated over…

A radiant boy is the glowing Ghost of a boy who has been murdered by his mother and whose appearance portends ill luck and violent death. Radiant boys appear in the folklore of England and Europe, possibly originating with the Kindermorderinn (children murdered by their mothers) of Germanic folklore.