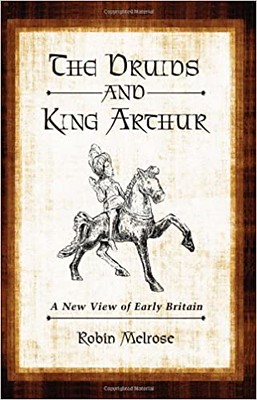 An exploration into the beliefs and origins of the Druids, this book examines the role the Druids may have played in the story of King Arthur and the founding of Britain.

It explains how the Druids originated in eastern Europe around 850 B.C., bringing to early Britain a cult of an underworld deity, a belief in reincarnation, and a keen interest in astronomy.

The work concludes that Arthur was originally a Druid cult figure and that the descendants of the Druids may have founded the Anglo-Saxon kingdom of Wessex.

The research draws upon a number of sources, including medieval Welsh tales, the archaeology of Stonehenge’s Salisbury Plain, the legends surrounding the founding of Britain, the cult of the Thracian Horseman, the oracle of Dodona, popular Arthurian mythology, and the basic principles of prehistoric astronomy.

Crushed by the Romans in the first century A.D., the ancient Druids of Britain left almost no reliable evidence behind. Because of this, historian Ronald…

The Druids have been known and discussed for at least 2400 years, first by Greek writers and later by the Romans, who came in contact…

Druidism evolved out of the tribal cultures of Britain, Ireland, and western France more than 2,000 years ago. In the 17th century, it experienced a…

It has long been the custom of historians to designate the megalithic monuments, stones, circles, cromlechs and dolmens of Western Europe as the handiwork of…