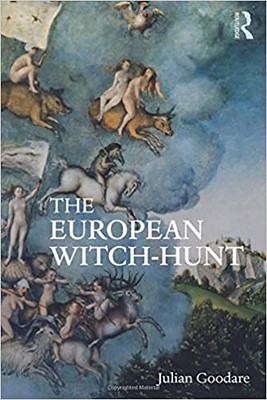 The European Witch-Hunt seeks to explain why thousands of people, mostly lower-class women, were deliberately tortured and killed in the name of religion and morality during three centuries of intermittent witch-hunting throughout Europe and North America.

Combining perspectives from history, sociology, psychology and other disciplines, this book provides a comprehensive account of witch-hunting in early modern Europe. Julian Goodare sets out an original interpretation of witch-hunting as an episode of ideologically-driven persecution by the ‘godly state’ in the era of the Reformation and Counter-Reformation. Full weight is also given to the context of village social relationships, and there is a detailed analysis of gender issues. Witch-hunting was a legal operation, and the courts’ rationale for interrogation under torture is explained. Panicking local elites, rather than central governments, were at the forefront of witch-hunting. Further chapters explore folk beliefs about legendary witches, and intellectuals’ beliefs about a secret conspiracy of witches in league with the Devil. Witch-hunting eventually declined when the ideological pressure to combat the Devil’s allies slackened. A final chapter sets witch-hunting in the context of other episodes of modern persecution.

This book is the ideal resource for students exploring the history of witch-hunting. Its level of detail and use of social theory also make it important for scholars and researchers.

Between 1450 and 1750 thousands of people, most of them women, were accused, prosecuted and executed for the crime of witchcraft. The witch-hunt was not…

Witchcraft, Witch-hunting, and Politics in Early Modern England constitutes a wide-ranging and original overview of the place of witchcraft and witch-hunting in the broader culture…

This in-depth and comprehensive resource explores the intersection of religion, politics, and the supernatural that spawned the notorious witch hunts in Europe and the New…

The Basque lands comprise a small region in southwestern France and northern Spain, lying on either side of the Pyrenees. They were the scene of…