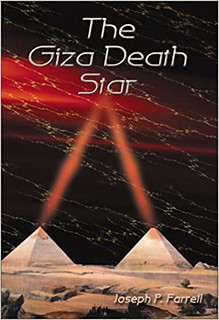 This is physicist Joseph Farrells’ amazing book on the secrets of the Great Pyramid of Giza. Among the topics discussed in detail in this fantastic book are: An Archaeology of Mass Destruction, Thoth and Theories; The Machine Hypothesis; Pythagoras, Plato, Planck, and the Pyramid; The Weapon Hypothesis; Encoded Harmonics of the Planck Units in the Great Pyramid; The Grand Gallery and its Crystals: Gravito-acoustic Resonators; The Other Two Large Pyramds, the ‘Causeways’, and the ‘Temples’.

Also: A Phase Conjugate Howitzer Evidence of the Use of Weapons of Mass Destruction in Ancient Times; High Frequency Direct Current ‘Impulse’ Technology; How the Giza Death Star worked.

This book takes off where Christopher Dunn’s ‘The Giza Power Plant’ left off. It is a rollicking ride into the world of fantastic science and an even more fantastic past that is just beginning to be imagined!

The phrase pyramid power refers to the idea that pyramids have magical or supernatural properties that produce energy fields beneficial to animate and inanimate objects.…

Why were the Allies worried about an atom bomb attack by the Germans in 1944? Why did the Soviets threaten to use poison gas against…

Remote viewing is not simply using psychic ability to obtain information. It is using scientific protocol to develop and extend that ability, so that ordinary…

This groundbreaking book reveals a new system of occult cycles that gives you complete Control over your own life. The Kabbalistic Cycles System explains heretofore…