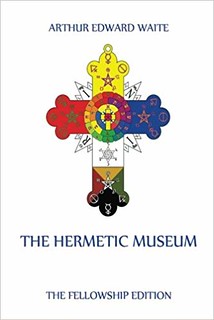 The Hermetic Museum was published in Latin at Frankfort, in the year 1678, and, as its title implies, it was an enlarged form of an anterior work which, appearing in 1625, is more scarce, but, intrinsically, of less value. Its design was apparently to supply in a compact form a representative collection of the more brief and less ancient alchemical writers; in this respect, it may be regarded as a supplement to those large storehouses of Hermetic learning such as the Theatrum Chemicum, and that scarcely less colossal of Mangetus, the Bibliotheca Chemica Curiosa, which are largely concerned with the cream of the archaic literature, with the works of Geber and the adepts of the school of Arabia, with the writings attributed to Hermes, with those of Raymond Lully, Arnold de Villa Nova, Bernard Trevisan, and others. This edition contains both original volumes one and two.

This is a short collection of some curious Alchemical treatises which was republished by A.E. Waite in 1893. According to the preface, Waite found these…

The Turba Philosophorum , or Assembly of the Sages. An Ancient Alchemical Treatise, with the chief Readings of the Shorter Codex. Parallels from Greek Alchemists.…

First published in 1937, Israel Regardie’s The Golden Dawn has become the most influential modern handbook of magical theory and practice. In this new, definitive…