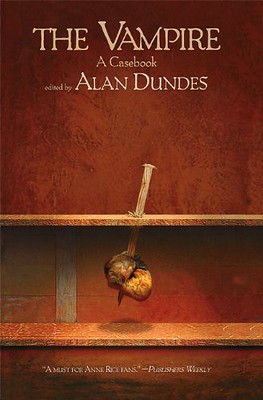 Vampires are the most fearsome and fascinating of all creatures of folklore. For the first time, detailed accounts of the vampire and how its tradition developed in different cultures are gathered in one volume by eminent folklorist Alan Dundes. Eleven leading scholars from the fields of Slavic studies, history, anthropology, and psychiatry unearth the true nature of the vampire from its birth in graveyard lore to the modern-day psychiatric patient with a penchant for drinking blood.

The Vampire: A Casebook takes this legend out of the realm of literature and film and back to its dark beginnings in folk traditions. The essays examine the history of the word “vampire;” Romanian vampires; Greek vampires; Serbian vampires; the physical attributes of vampires; the killing of vampires; and the possible psychoanalytic underpinnings of vampires. Much more than simply a scary creature of the human imagination, the vampire has been and continues to haunt the lives of all those who encounter it—in reality or in fiction.

Germany has a great number of species of vampires, about fifty, and most of them are REVENANTs. Truth be told, the vampires of Germany are…

Vampiir (Vam-PEER) In northern Europe, in the Republic of Estonia, the concept of a blood-drinking vampire was imported from the neighboring countries of Latvia, Finland,…

I Am Legend (1954) is a vampire novel by RICHARD MATHESON, considered a classic in contemporary vampire literature and in the horror genre. I Am…

Alan Dundes, in this casebook of an anti-Semitic legend, demonstrates the power of folklore to influence thought and history. According to the blood libel legend,…