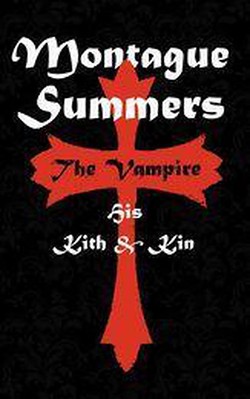 “The Vampire – His Kith and Kin” is a 1928 work by English clergyman and author Montague Summers. Within it, Summers discusses the vampire phenomena from a Catholic point of view, offering an a veritably academic study of the subject. Contents include: “The Origins of the Vampire”, “The Generation of the Vampire”, “The Traits and Practice of Vampirism”, “The Vampire in Assyria, the East, and Some Ancient Countries”, and “The Vampire in Literature”. Augustus Montague Summers (1880 – 1948) was an English clergyman and author most famous for his studies on vampires, witches and werewolves—all of which he believed to be very much real. He also wrote the first English translation of the infamous 15th-century witch hunter’s manual, the “Malleus Maleficarum”, in 1928. Other notable works by this author include: “A Popular History of Witchcraft” (1937), “Witchcraft and Black Magic” (1946), and “The Physical Phenomena of Mysticism” (1947).

Bas (BAS) The folklore from the Chewong people of Malaysia tells of the bas, a psychic spirit vampire that lives off ruwai, a being's soul…

Montague Summers, (1880–1948) was an English author who wrote extensively on Witchcraft, Demonology, vampires and werewolves (see Lycanthropy). He believed that Satan and his Demons…

Written by a venerable author of occult studies, The Werewolf in Lore and Legend is the first definitive book on werewolfery and the remarkable successor…

Considered to be the worst of the Bulgarian species of vampires, the Children of Judas is the clan name for a family of vampires alleged…

Bantu Dodong Pronunciation: Ban-TOODoe-DONG The Bantu Dodong is a vampiric REVENANT from India. It lives in caves and survives off animal blood. Source: Konstantinos, Vampire,…