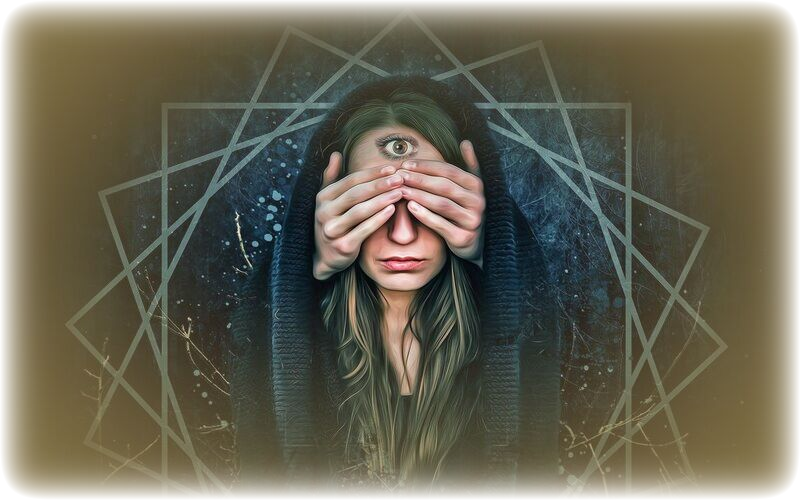 THIRD EYE is the location of the third eye in the middle of the forehead corresponds to the brow chakra; psychic energies are believed to be connected to the energy that supposedly emanates from this chakra.

Certain mystical and esoteric belief systems postulate that in the far reaches of prehistory, the predecessors of humanity possessed a third eye in the middle of their foreheads which allowed them to see the spirit realms directly. According to this theory, as millions of years passed the third eye was used less and less so that it disappeared into the folds of the brain, with the result that spiritual perception was all but lost.

Incredibly there may be a degree of truth in this obscure occult doctrine. Scientists have discovered that the pineal gland, a smallish organ buried within the brain at the approximate site of the third eye, has been found to retain a small degree of sensitivity to light, leaving scientists to suggest that it might have been an evolutionary remnant of an organ of sight. Only recently has the actual function of the pineal gland been discovered. It has been found to be one of the triggers in physical growth and the hormonal changes of puberty. It also secretes one of the so-called ‘feel good’ chemicals known to boost mood, serotonin.

Occultists believe that the pineal gland is unusually active in psychics and can be stimulated by techniques such as massage, acupuncture, concentration, meditation and so on, to produce psychic powers.

OPEN THE GATEWAY TO YOUR HIGHER SELF. Science Meets the Metaphysical…The Amazing TRUTH About Your Third Eye! An Amazon best-seller. Do YOU want a direct…

According to Eastern religious traditions, such as Hinduism and Tantric and Shaktic yoga, chakras are centers or spinning wheels (chakra means “wheel” in the ancient…

SPIRITUAL EMERGENCE is a term evolved from ‘spiritual emergency’, which was coined in the 1970s by psychiatrists Stanislav Grof and his wife Christina to describe…

PSI An acronym derived from paranormal sensory information’ and used to describe ESP, psychokinesis and other related powers. Psi is also the 23rd letter of…