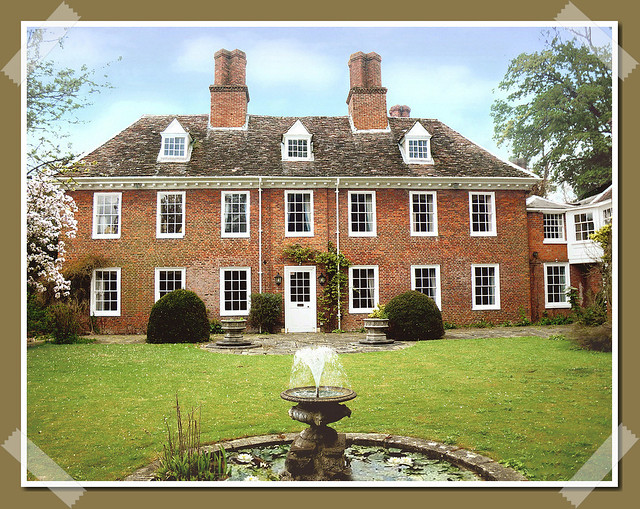 Thorpe Hall Haunted stately home in the western side of Louth in Lincolnshire, England. Thorpe Hall is renowned for its Green Lady, the ghost of a Spanish woman who fell in love with the home’s owner and builder, Sir John Bolle.

Bolle, a married man, participated with Sir Walter Raleigh in the siege of Cádiz, Spain, in 1596. His bravery earned him his knighthood. While in Cádiz, an upperclass woman, Doña Leonora Oviedo, fell in love with him. He refused to engage in an affair with her.

When it came time for him to sail back to England, she gave Bolle a portrait of herself wearing a green dress and also presented him with an expensive gold chain to give to his wife.

Back home, Bolle established a custom of setting a place at the dinner table for Doña Leonora, a practice that was carried on by following residents of Thorpe Hall into the 1920s.

Doña Leonora entered a convent, where she spent the rest of her life, pining away, it is said, for her lost love. Bolle died in 1606. The ghost of Doña Leonora, in the green dress of her portrait, roams the Thorpe Hall gardens looking for him.

Other versions of the story exist. In one, the distraught Doña Leonora committed Suicide after Bolle left Cádiz. Her ghost followed him home and took up residence in the hall. In another version, she herself followed Bolle back to England, but when she saw how happy he was with his family, she stabbed herself to death in the garden of his home.

Fine arts photographer Sir Simon Marsden slept in Bolle’s former bedroom during the years his family lived in the house but never experienced any ghosts. A phantom coach was seen by his older brother and sister.

Thorpe Hall, on the edge of the Louth Borough boundary, is one of several places in England that has become associated with the story of ‘The Spanish Lady’s Love’, which tells of a beautiful Spanish lady who falls in love with an Englishman. When he finally confesses that he is already married, the Spanish lady gallantly sends gifts to his wife, and herself enters a nunnery. A popular ballad on the subject by Thomas Deloney, printed in 1603 and probably based on an already existing tradition, excited interest in the identity of the unnamed Englishman, and the tale became attached to several different men who took part in the capture of Cadiz in 1596, including Sir John Bolle of Thorpe Hall, one of the Earl of Essex’s captains in the campaign.

It was said that, when Sir John departed Cadiz, the Spanish Lady sent as presents to his wife a great many jewels and other valuables, among which was her own portrait ‘done on green’ (wearing green), a beautiful tapestry bed embroidered in gold by her own hands, and several casks full of plate, money, and other treasures. Some of these things were said in 1810 to be still in the possession of the family, although the portrait had by some accident been disposed of about half a century before.

Meantime, the portrait had led to her being known as ‘the Green Lady’ in the neighbourhood, ‘where to this day there is a traditionary superstition among the vulgar, that Thorpe Hall was haunted by the green lady, who used nightly to take her seat in a particular tree near the mansion’. It was also believed that, during the life of Sir John’s son, Sir Charles Bolle, a knife and fork were always laid for her at table, if she chose to make an appearance.

Another tree-sitting ghost, the Wicked Lady of MARKYATE CELL, undoubtedly haunted her former home in Hertfordshire as an atonement for her crimes, but it is hard to see why the blameless and great-hearted Spanish Lady should be condemned to haunt Thorpe Hall or anywhere else. Probably the portrait generated the ghost story. Whatever the reason for her haunt, she is said to have been frequently heard, though not apparently seen, between 1860 and 1880.

Up to the 1930s, a skeleton used to be kept in an oak chest in this house. Why this should be so is not known;…

Hyde Hall in this parish was said to be haunted by the ghost of Sir John Jocelyn, the third Baronet. Tradition said that, during his…

Longleat Stately home in Wiltshire, England, haunted by several ghosts, including the “Green Lady,” who is said to mourn her murdered lover. Since the Reformation,…