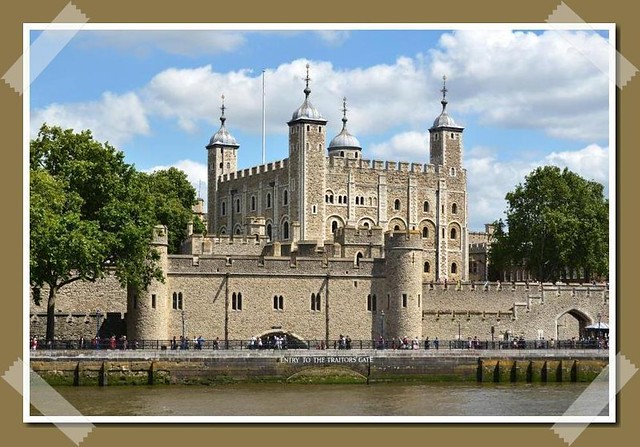 Tower of London This blood-soaked site once served as a prison and execution site, and it is said to be filled with the ghosts of victims who lost their heads on its scaffold. Many Ghosts have been sighted by sentries who see them either standing at various tower windows, walking on the grounds or passing through walls and doors. Ghosts most often are headless, and include men, women and children—and a bear that presumably dates from the Tower’s days as a menagerie. Most ghosts travel alone, but apparitions moving in processions have also been seen.

One of the first sightings ever recorded was the ghost of Thomas Becket, first seen in 1241, 71 years after his murder in Canterbury Cathedral when he was its archbishop. Although the presence of Becket’s ghost is unusual because he was not killed at the Tower, it was fitting that he returned to haunt it, because he was a Londoner who once had been constable of the Tower. More unusual was Becket’s probable reason for haunting the Tower. It seems that the Tower’s neighbors were being disturbed by alterations made at the site and Becket’s ghost appeared to protest them. A priest reportedly saw the apparition striking the walls with his cross, whereupon they immediately crumbled.

The ghost most frequently seen is that of Anne Boleyn, second wife of King Henry VIII, whom he had beheaded in 1536. Boleyn’s ghost appears either just below the room where she spent her last night, walking in front of the Tower chapel, or walking toward the Thames River which runs alongside the Tower.

Three other ghosts are of beheaded women, one of whom was Catherine Howard, another hapless wife of King Henry VIII. The others were Margaret, Countess of Salisbury, and Lady Jane Grey.

The Countess met a particularly horrible end in 1541 when her executioner’s ax failed to hit her neck on his first three attempts, hit it only halfway on his fourth try, and succeeded only with his fifth blow. The Countess screamed and struggled between each attempt, and it is these cries of terror that reportedly are heard from her ghost about the time of the anniversary of her death.

Lady Jane Grey was little more than a child of 17 when she was executed after reigning as a queen for nine days in 1553. Her apparition was seen a few times in the 1950s, around the time of the anniversary of her death.

The ghost of King Henry VIII has been said to fl oat in midair past a sentry. Other spirits sighted belong to notables in English history, such as the Duke of Northumberland, whose ghost was such a familiar figure to sentries that they nicknamed the path between the Martin and Constable Towers, Northumberland’s Walk.

Other hauntings include Sir Walter Raleigh, executed in 1618 on orders of King James I, and the ghosts of King Edward V and Prince Richard, brothers who died as children in 1483 when their uncle wanted them out of his way to claim the throne as King Richard III.

Occupants of or visitors to certain houses, hotels, castles, theatres, schools, or other buildings sometimes report experiencing odd, recurring, unexplainable phenomena, such as noises with…

On the south-east border of Charnwood Forest, near Newtown Lindford, is Bradgate Park, and the ruins of the brick mansion built c.1490–1505 by Thomas Grey,…

East Coast Park is one of the most frequented places in Singapore. But every single time you stroll, cycle or jog past this yellow tower…