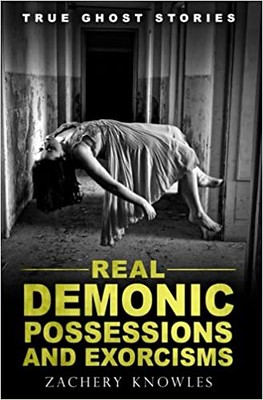 Looking for a Scare? Then Read These 13 Spine-chilling Stories
Within these pages, you will find eyewitness stories unlike anything you’ve read before. You will experience the terror, the helplessness, the loss of control, and the torment felt by those who have fallen prey to the dark powers in this world—the demon possessed.

The symptoms of demonic possessions manifest themselves in many ways—convulsions, bite marks appearing from nothing, and levitation are all common. The victims frequently inherit clairvoyant abilities, too, seeing directly into another person’s soul to uncover their deepest, darkest secrets. Perhaps most incredibly of all, though, the possessed may begin speaking in a language they’ve never previously been exposed to. These are symptoms it’s almost impossible to explain or dismiss.

This chilling collection of stories date from modern times all the way back to the 1600s, spanning multiple countries including the United States, Great Britain, the Philippines, France, and South Africa. From the poor to the middle-class, the prostitute to the housewife, and the schoolboy to the local butcher, you will learn demons do not discriminate between class, gender, or age—it can happen to anyone.

Most of the time, the demon possesses one individual, but not always. In this book, you will find the case of two brothers possessed simultaneously and interacting with each other in the throes of their possession as well as an instance in which an entire school of children seem to suffer at the hands of a demonic entity.

Some of these horror stories arose from poor judgment, such as a pact with the devil or seeking the help of an ill-reputed healer. Others succumbed to a curse, while some are unfortunate enough to simply find themselves in the wrong place at the wrong time.

Some of the victims of these stories were delivered, but found their lives cut dramatically short, no doubt due to the physical torments their human bodies endured during the possession and exorcism. Others faced prison, or found themselves locked up in asylums because of actions committed while they were under an evil influence. Yet, there are still those whom were unable to be delivered, one in particular even leading to a gruesome, haunting murder. It seems there are no happy endings when demons become involved.

So let me ask you: do you believe in demons? True Demonic Possessions and Exorcisms is guaranteed to befuddle the skeptics and confirm to believers that demons are not to be messed with. Whichever side of the fence you sit, one thing is for sure: this collection of true stories of demonic possession is guaranteed to be a hair-raising experience.