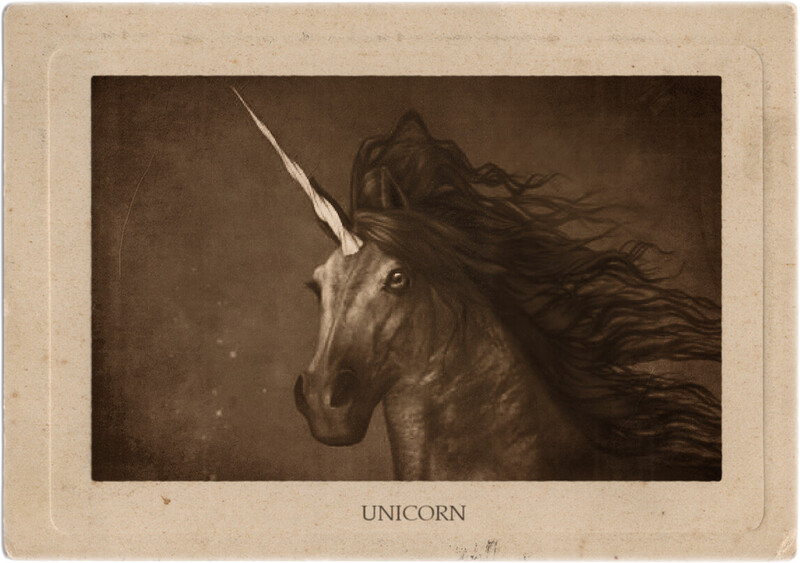 unicorn In world mythology and folklore, a fantastic animal usually portrayed as a small horselike creature with a single horn protruding from its head. In European mythologies the unicorn is usually viewed as a beneficent being. A medieval description of the fantastic animal is found in Le Bestiaire Divin de Guillaume Clerc de Normandie.

The Unicorn has but one horn in the middle of its forehead. It is the only animal that ventures to attack the elephant; and so sharp is the nail of its foot, that with one blow it can rip the belly out of that beast. Hunters can catch the unicorn only by placing a young virgin in his haunts. No sooner does he see the damsel, than he runs towards her, and lies down at her feet, and so suffers himself to be captured by the hunters. The unicorn represents Jesus Christ, who took on Him our nature in the Virgin’s womb. . . . Its one horn signifies the Gospel of Truth.

The European belief in unicorns stems in part from ancient pagan Greek sources as well as the Septuagint versions of the Hebrew scripture. When the Hebrew Bible was translated into Greek, the Hebrew word reem, which might mean a wild ox, was translated monokeros (one-horned). This rendering was followed in later Latin versions of the Bible, which in turn influenced English translations such as the King James Version. The Book of Numbers (23:22) says: “God brought them out of Egypt; he hath as it were the strength of an unicorn.”

The Revised Standard Version of the Bible in its translation of the verse substitutes “wild ox” for unicorn. One medieval Jewish folktale said the unicorn had perished in Noah’s flood because it was too large to enter the ark. Another Jewish folktale argued that God never destroys his own creation; if the unicorn was too large to get into the ark, then God would have let it swim behind the ark.

Along with the unicorn as a beneficent symbol, such as Jesus Christ, the animal was also identified with evil and death. In The Golden Legend, a series of saints’ lives by Jacobus de Voragine written in the 13th century, the “unicorn is the figure of Death, which continually followeth man and desireth to seize him.” Death rides a unicorn in some late medieval Books of Hours. In the Ancrene Riwle, a 12th-century book of rules for nuns, the unicorn appears as a symbol of wrath, along with the lion for pride, the serpent for envy, and the bear for sloth.

The Church Fathers at the Council of Trent, held in the 16th century, forbade the use of the unicorn as a symbol of Christ. One legend they cited was from Leonardo da Vinci’s Bestiary, in which the artist made the unicorn a symbol of lust. The unicorn’s horn was thought to have magic curative powers; many late medieval monasteries and cathedrals were believed to possess them, and they appear in inventories of Queen Elizabeth I and other monarchs of the period. Powders purporting to be made from crushed unicorn horns were sold by apothecaries.

As late as the French Revolution the unicorn was believed to exist, and a “unicorn’s” horn was used to detect poison in food fed to royalty. In Chinese mythology the unicorn was one of the four animals of good omen, the others being the phoenix, the dragon, and the tortoise. According to one story, when Confucius was born, a unicorn spit out a piece of jade with the inscription announcing the event: “Son of the essence of water, kingdoms shall pass away, but you will be a king, though without a throne.” James Thurber, in his Fables for Our Time (1940), includes a comical episode called “The Unicorn in the Garden.”

Long portrayed in myths and legends, the unicorn is said by some people to be a single-horned animal that was not only a real animal in ancient times but still exists today. Believers usually describe it as looking like a white horse with a horn on its forehead and report that it is incredibly gentle and shy. Because of this shyness, they say, the unicorn is an elusive creature that lives in hard-to-search places.

Indeed, in the seventeenth century there were several discoveries of what appeared to be unicorn fossils in remote areas. One of the first was in 1663 in a limestone cave near Quedlinburg, Germany. The town was close to the Harz Mountains, where an old legend told of a woman who rode on a unicorn. Therefore, many people believed that the fossil discovery was genuine, and they flocked to the cave, damaging the site before anyone could excavate the skeleton from the rock in which it rested. The fossil was damaged still further during the excavation process, but its skull, which featured a single horn 7.5 feet (2.3m) long, was intact.

Scholars theorize that this fossil represents an extinct species of stag or ox. But a few people insist that they have seen living unicorns in the area where the fossil was found, a forest so thick that an elusive animal could, theoretically, go undetected there. One such person is Austrian naturalist Antal Festetics, who claims to have captured its image on video while he was in the Harz Mountains in 1991 filming a documentary. He turned the tape over to experts at Göttingen University, where anyone can view it; despite Festetics’ claims, skeptics consider the tape a fake.

Skeptics have offered a similar explanation for the fossils: Instead of being from an extinct species of animal, they were human-made—or, more specifically, they came from living creatures made to resemble unicorns by farmers. Throughout history, in certain cultures people have turned two-horned animals into unicorns in order to mark various animals as being for a particular purpose. For example, the ancient Romans made unicorns by manipulating the two horns of a young ram or bull on a daily basis so that the horns grew together, or by burning a young animal’s scalp before the horns’ emergence so that both horns would grow out of the center of the skull instead of on the sides. The resulting horn would not have looked healthy, which means that the living animal would not have been mistaken for a natural unicorn, but the horn of such an animal, once fossilized, would easily be mistaken for a natural one.

Believers in natural unicorns, however, say that there is ample evidence that these animals once existed in the wild. Unicorns are mentioned in the Bible and in the writings of ancient Greeks and Romans and medieval European scholars, though the creature is described differently in various texts. In the sixteenth century Lodovico de Varthema, also known as Lewis Vartoman, wrote in his book Itinerario (Travel Route) that he had seen two live unicorns in the Middle Eastern city of Mecca; he described them as being fierce beasts with the bodies of horses, the heads of stags, and the legs of goats. Other scholars, both medieval and ancient, also described unicorns as being fierce, which has led some people to believe they were actually talking about the rhinoceros.

Also in ancient and medieval times, some people had objects, such as drinking cups, made from horns that were said to be from unicorns. By the time of the Renaissance, European shopkeepers were selling such horns, called alicorns, for healing purposes, claiming that when ground up, their powder had the ability to cure a variety of illnesses or ward off poisoning. Then and now, some people have taken this as proof that the animals existed. However, most of these horns were made by boiling an elephant or walrus tusk for six hours in a special solution that softened it so it could be straightened out and then twisted to simulate what a supposedly real unicorn horn looked like. Those horns that were not manufactured in this way are believed to have come from a narwhal, an arctic sea mammal that has a single elongated tooth, or tusk, that often looks like it is coming from its forehead. Indeed, in 1638 Danish zoologist Ole Wurm traced the origin of several alicorns in the European marketplace to Scandinavian fishermen. Nonetheless, believers in unicorns say that at least some of the unicorn horns in the marketplace might have been genuine—and that even if they were all fake, that still leaves open the possibility that unicorns nonetheless exist.

“The core of the book is about dragons: Western, Chinese, and Japanese, although it also covers the Sea-serpent, the Unicorn, and the Chinese Phoenix. Gould…

In 1941, the young scientist and scholar Willy Ley, German-born and educated, wrote his first book in the field of popular science, initiating a lifelong…

Afanc (avanc). There was some doubt about the form taken by the monster which inhabited a pool called Llyn yr Afanc on the River Conwy…

WANT TO LEARN BLACK MAGICK? CLICK HERE The Demon Amdusias is a Fallen Angel and 67th of the 72 Spirits of Solomon. Amduscias is a…

Theosophia Pneumatica Also known as The Little Keys of Solomon, this grimoire was published in 1686 in German. It possibly was included in the German…