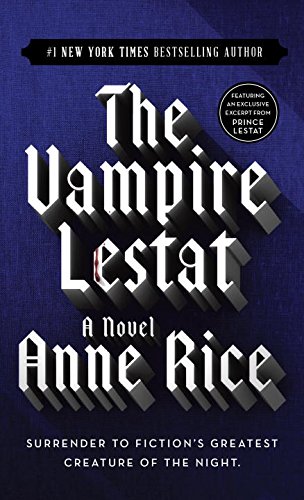 The Vampire Lestat (1985) is the second vampire novel by Anne Rice, continuing the story of Lestat, the central character in Interview with the Vampire. The success of The Vampire Lestat, published in 1985, established the Vampire Chronicles for Rice, a series of books about vampires.

The Vampire Lestat opens in 1984 with Lestat awakened by a rock band after lying in the ground since 1929. He adapts to the mid-1980s immediately, becoming a rock star himself. (Rice found rock musicians outrageous, independent, and outsiders—an excellent vehicle for vampires.) Lestat rides a Harley motorcycle, listens to his Walkman radio, and discovers movies on video. He is appalled with the evils around him and decides that he must try to rationalize his basically evil nature by trying to show evil to others. He uses rock music to repudiate evil through art.

Lestat also finds Louis’s interview tapes—the material for Interview—and thinks Louis has not told the complete story, especially from Lestat’s point of view. He resolves to set the record straight with his own autobiography. He tells of his young manhood in prerevolutionary France and of his search for goodness and purity. His fame as an actor in Paris attracts Magnus, a vampire who forcefully transforms Lestat with the Dark Gift.

Magnus immediately abandons Lestat by committing suicide. Lestat makes his mother, Gabrielle, and his friend Nicolas into vampires. Lestat goes off in search of a mentor he has learned about from the Paris vampire leader, Armand. He finds this mentor vampire, Marius, who tells him about the origins of vampirism in ancient Egypt. Lestat finds Enkil and Akasha, the Adam and Eve of all vampires.

When they were alive, Akasha and Enkil were murdered by flesh eaters, and an evil spirit, Amel, entered Akasha through her wounds, and vampirism was born. Akasha and Enkil exchange blood and become deities demanding blood sacrifice. The vampires they create feed their blood needs through their own drinking, until the pair no longer need blood to survive. They are now so old and powerful they are like the stone statues of gods. Lestat awakens Akasha, and she lets him drink her blood, which gives him new powers.

They share each other’s blood until Enkil rouses and forces them apart. Marius sends Lestat away for his protection. Lestat goes to New Orleans, where he meets Louis de Pointe du Lac and makes him, and then meets and makes the child vampire, Claudia. He gives a different perspective on the life the three shared than did Louis in Interview. His story is published, and vampires are angered at having their existence exposed.

The novel ends with Lestat’s rock concert, in which he sings that mythic evils like vampires are irrelevant for the late 20th century; war and hunger are the Demons to eradicate. His aim is to goad all the evil vampires into appearing against him so that he can fight them and truly bring goodness into the world. The final scene is a cliff-hanger— Akasha kidnaps Lestat—paving the way for the third book in the Vampire Chronicles, Queen of the Damned.

[author image=”https://occult-world.com/wp-content/uploads/2014/09/roseMary-guiley.jpg” ]Rosemary Guiley works full-time in the paranormal and metaphysical fields. She has written more than 50 books, including single-volume encyclopedias, on a variety of topics, A-Z, angels to zombies and everything in between. Source Amazon.[/author]
Taken from : The Encyclopedia of Vampires, Werewolves, and Other Monsters