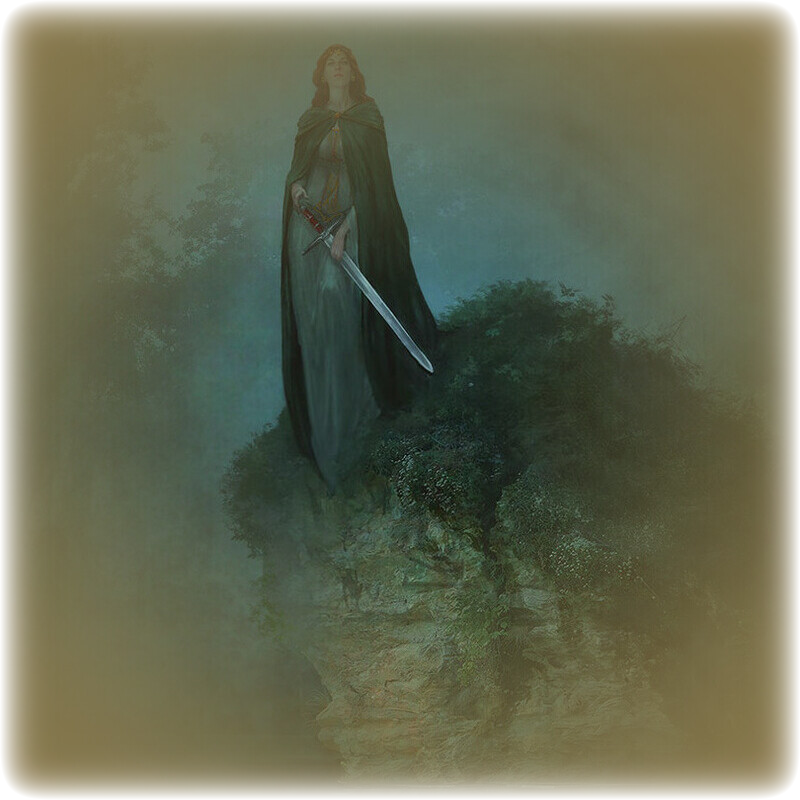 Viviane, the Lady of the Lake In Arthurian lore the lover of the wizard MERLIN and his most able pupil. Viviane is also called Nimue, Niviene, Eviene, or Vivienne. She served as foster mother to Sir Lancelot du Lac (of the Lake), raising him beneath the waters. Viviane gave the magical sword Excalibur to King Arthur at the beginning of his reign and accepted the sword’s return at the destruction of Camelot.

Origins of a Lady of the Lake go back to the Celtic goddesses Cerdwen and Brigid. The name Viviane or Vivienne derives from the Celtic Vi-Vianna or Co-Viana, which are other names for the Celtic water goddess Coventina. The Celts worshiped water deities, believing them to represent the essence of life. The spontaneous movements of the water illustrated the powers of the goddesses, nymphs, and Fairies that lived below the surface. Offerings to the water deities were common, especially gifts of swords and other metalware. Such practices continue today when someone throws a coin into the water and makes a wish or calls on “Lady Luck.”

The sword Excalibur must have been such an offering to the water goddess. Following a battle early in his rule, King Arthur remarks to Merlin that he has no sword. Merlin confides that he knows the whereabouts of a great sword and directs Arthur’s attention to a nearby lake. In the middle of the lake, a lady’s arm holds a sword aloft. Presently a lovely woman rows a small boat across the lake to meet Arthur. Merlin explains that the woman is the Lady of the Lake, who comes from a place on a rock hidden in the lake’s mists: in other words, Avalon. Arthur requests that the Lady give him the sword, but she demurs, saying that the sword, named Excalibur, belongs to her. But she will give it to Arthur if he will grant her a gift, which she will request at the right time. Arthur agrees to the bargain and boards a barge out to the middle of the lake where he claims the sword and scabbard, and the arm disappears.

According to the legends, Viviane returns Excalibur to Arthur after MORGAN LE FAY steals the sword and gives it to her lover, Sir Accolon of Gaul. Thwarted, Morgan throws the scabbard, which protected Arthur when he wore it, into the lake. After Mordred mortally wounds King Arthur at the Battle of Camlann, the king asks Sir Bedivere (Bedwyr or Girflet) to return Excalibur to the lake. Upon returning, however, Bedivere makes no mention of the Lady or the arm, and Arthur knows that he has not returned the sword. Ordered to try again, Sir Bedivere takes Excalibur to the lake and hurls it into the water, where the mysterious arm and hand catch it and then disappear.

As foster mother (perhaps stepmother) to Lancelot, Viviane gives the young knight the following advice: that a knight should have two hearts, one as hard as a diamond and the other as soft as wax. With his hard heart, the knight opposes treachery and cruelty, while the waxen heart allows the knight to follow people who can lead him to goodness and graciousness. Viviane also gives Lancelot a sword.

Another of Viviane’s personae has been associated with Elaine, one of the three daughters of Igraine and Gorlois, duke and duchess of Cornwall and sister to Morgause and Morgan le Fay. As Elaine she is the mother of Sir Galahad, the knight who finds the Holy Grail. As Nimue she is Merlin’s great love and tormentor who imprisons him in a cave or tree for many years. The name Nimue also relates to Mnemosyne, one of the water nymphs or Muses that gave magical swords to Perseus in Greek mythology.

The Lady of the Lake is the spirit who gave the magical sword Excalibur to Arthur and then reclaimed it after the Battle of Camlann.…

BEDWYR, according to Welsh mythology, was a one-handed warrior who, together with his friend and companion Kai, played an important part in helping CULHWCH to…

Dozmary Pool is a small lake in the Bodmin Moor in Cornwall, England, associated with the Devil. According to lore, the Devil sentenced JAN TREGEAGLE…

Merlin is the archetypal Wizard of Arthurian lore. Merlin is a Latinized version of the Welsh myrddin. His exact origins are lost in myth; he…