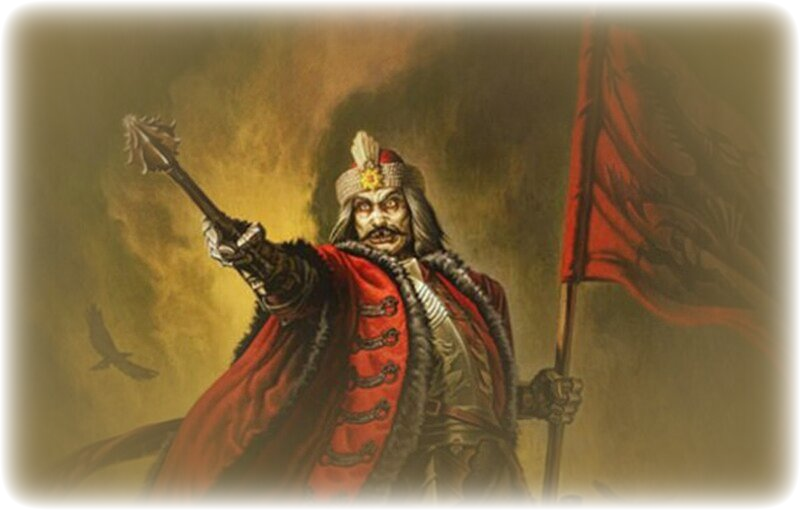 Vlad Tepes (1431–1476) Voivode (prince or ruler) of Wallachia, a province south of Transylvania and now part of Romania, and namesake of BRAM STOKER’s vampire, COUNT DRACULA. Vlad Tepes means “Vlad the Impaler,” a name earned because of Vlad’s impalement of his enemies upon STAKES and spikes.

It is a popular misconception that Vlad Tepes is the “historical Dracula.” Vlad’s sole connection to the ﬁctional character is in his name. He was often called “Dracula.” His father, Vlad II, was known as Dracul, or devil. Dracula means “son of Dracul,” or “son of the devil.” Vlad committed his many and atrocities against his enemies and subjects alike.

Vlad has no association with folkloric vampirism. Modern accounts say he drank the BLOOD of his enemies on at least one occasion, but no evidence exists to support this. Even so, such a practice in warfare symbolizes the total conquering and absorption of the enemy and has no connection to vampires. Despite the lack of historical evidence of Vlad drinking blood, a woodcut shows him dining while surrounded by victims impaled on stakes—his favourite means of punishment.

Vlad’s principality of Wallachia came into existence in the late 13th and 14th centuries, and was the ﬁrst Romanian state to form. The ﬁrst ruler was Basarab I (r. 1310–52), who was followed by his son Nicolae Alexandru (r. 1352–64). The capital was established in Curtea de Arges, where a fortress was built at a strategic point overlooking the Arges River (see CASTLE POENARI). The Wallachian society was organized as a feudal system, with a ruling class of landed aristocracy called boyars beneath the voivode.

Vlad’s father, Vlad II Dracul (“Vlad the Devil”), came to power in 1443 after his brother, Vlad I, died of illnesss without an heir. Vlad II held the throne by force. Wallachia was—and had been for some time—under constant threat by invading Turks from the expanding Ottoman Empire. There were ongoing battles and ﬁghting, including clashes of the Crusades.

In 1447 Vlad II was killed, and his sons Vlad III and Radu ﬂed to the Ottoman court. In less than a year, Vlad III invaded Wallachia with Ottoman support, and briefly seized control. He next came to power from 1456 to 1462. The details of his return to power are not known.

During this second reign, the capital of Wallachia was in Targoviste, where Vlad established a residence. The boyars were increasing their wealth and influence, and Vlad reportedly committed atrocities against them to keep them in check. One source, the Byzantine chronicler Laonic Chalkondyles, stated that Vlad killed 20,000 men, women, and children in a short period of time.

On another occasion, he is said to have invited boyars to a feast. When it was over, he quizzed them one by one on how many princes there were in Wallachia. The correct answer was seven. No one gave the correct answer, and so all 500 of them were impaled on stakes. One Easter he invited citizens and their families to a feast. At its conclusion, he had the old ones impaled around the city and marched off the younger ones—including children—to be forced laborers building Castle Poenari.

If Vlad suspected anyone of treason, he had them and their families tortured and impaled. Thousands and thousands of people were supposedly impaled. According to German stories, he also had churches and villages burned, and he ruined crops. He locked people into rooms and burned them. He forced people to dig their own graves and then had them beheaded at graveside. He boiled people alive in a cauldron, forcing them to put their heads through holes in the lid so that they could not move. He boiled to death a Tartar thief and forced other Tartars to eat him. He impaled women holding their nursing infants, and when the mothers died, he cut off their breasts and stuffed the infants inside them.

He did not save his wrath for his enemies alone. He ordered his mistress’s stomach be split open to prove her pregnancy. He had the turbans of visiting ambassadors nailed to their heads when they did not remove them in his presence, and he burned a whole group of beggars alive at a sumptuous feast, justifying his actions as eliminating a source of pestilence. When a boyar complained of the screams and stench from the impaled Turks, Vlad had him impaled also—on a higher stake, above the scene.

The list of atrocities goes on. While some of these accounts may be exaggerated, Vlad nonetheless acquired a reputation of extreme ruthlessness and cruelty that undoubtedly was justiﬁed.

In 1462 Vlad was ousted and his brother, Radu cel Frumos, was installed on the throne. Vlad was imprisoned in Hungary for 13 years. He bargained a release in 1475 and made plans to take the throne for a third time. He was successful in 1476. But his third reign was short-lived. About a month into it, Ottomans invaded and Vlad was killed.

Different accounts of his death are given. He was allegedly shot to death with arrows in battle. Or, he was assassinated by a Turk in the forest near Snagov, and was beheaded and his head staked in Constantinople. The monks of the monastery at Snagov took pity and buried his remains on the monastery ground. Another legend has it that Vlad and his wife were trapped at Castle Poenari when the invading forces arrived. Vlad’s wife threw herself off the side into the river far below. Vlad supposedly escaped through secret tunnels. This story line opened Francis Ford Coppola’s ﬁlm BRAM STOKER’S DRACULA (1992).

If Vlad was buried at Snagov, the location of his grave remains a mystery.

Stoker came across the name Dracula in An Account of the Principalities of Wallachia and Moldavia (1820) by William Wilkinson, one of several sources he consulted. His original name for his vampire was Count Wamphyr, using one of the Eastern European terms for vampire. He liked the meaning of Dracula—“devil”—and substituted the name. From then on his vampire was called Count Dracula. Stoker also incorporated some of the Wallachian lore and history in Wilkinson’s account into his novel. There is no evidence that Stoker had any detailed knowledge of Vlad’s life, acts, or characteristics. Thus constitutes the connection between the historical man and the ﬁctional vampire.

Some scholars have concluded that Dracula is based on Vlad from a remark made by the character PROFESSOR ABRAHAM VAN HELSING, in which he says that Dracula “must, indeed, have been that Voivode Dracula who won his name against the Turks . . . If it be so, then was he no common man; for in that time, and for centuries after, he was spoken of as the cleverest and most cunning, as well as the bravest of the sons of the ‘land beyond the forest.’”

Despite the thin connection to Stoker, Vlad Tepes continues to be heavily promoted as the “historical Dracula.” Books, both nonﬁction and ﬁction, and ﬁlms—such as Coppola’s—reinforce the association, and in Romania, an entire portion of the tourist industry depends on it. Vlad Tepes— one of many provincial princes in the history of the region, and one who could not even hold onto his own power—has become the most recognizable face of the nation. See also TRANSYLVANIA.

Encyclopedia of Vampires, Werewolves, and Other Monsters – Written by Rosemary Ellen Guiley -a leading expert on the paranormal -Copyright © 2005 by Visionary Living, Inc.

If you want to discover the captivating history of Vlad the Impaler, then keep reading… The Balkans were the home of both the vampiric stories…

Witches' Pond – According to the legend, the pond located in Boldu-Crețeasca Forest, having a diameter of only 5 m, is the place were Vlad…