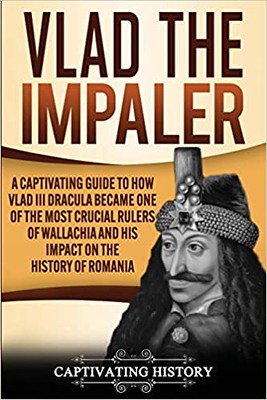 If you want to discover the captivating history of Vlad the Impaler, then keep reading…

The bulk of the book will deal with what Vlad’s political career looked like, what wars he waged, and how his life eventually ended. But we’ll go one step beyond and cover some areas that historians don’t typically focus on. In addition to raw facts, we’ll also focus on what Vlad III’s character was, what drove him forward, and what his chief traits might have been. In addition, we will give a much-needed focus on his successors and what life was like in Wallachia after his passing.

Furthermore, you’ll also get a glimpse into some of the most popular myths and legends about Vlad III, some of which were written and passed on by both his supporters and his bitter enemies. All of these are needed to get as complete an image of Vlad as possible, which will help us understand what kind of man he was and what kind of impact his life had on those around him, as well as those who came after him.

In Vlad the Impaler: A Captivating Guide to How Vlad III Dracula Became One of the Most Crucial Rulers of Wallachia and His Impact on the History of Romania, you will discover topics such as

Vlad Tepes (1431–1476) Voivode (prince or ruler) of Wallachia, a province south of Transylvania and now part of Romania, and namesake of BRAM STOKER’s vampire,…

Witches' Pond – According to the legend, the pond located in Boldu-Crețeasca Forest, having a diameter of only 5 m, is the place were Vlad…