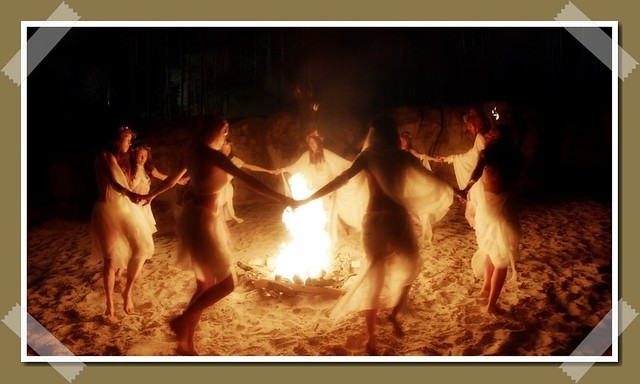 Walpurgisnacht In German witch lore, the greatest of the pagan festivals celebrating fertility and one of the major Sabbats observed by witches. Walpurgisnacht is the same as Beltane or may Eve and is celebrated on the night of April 30 in observance of the burgeoning spring. Walpurgisnacht became associated with Saint Walburga, a nun of Wimbourne, England, who went to Germany in 748 to found a monastery. She died at Heidenheim on February 25, 777. She was enormously popular, and cults dedicated to her quickly sprang into existence. In roman martyrology, her feast day is may 1.

During the witch hunts, Walpurgisnacht, or Walpurgis Night, was believed to be a night of witch revelry throughout Germany, the Low Countries and Scandinavia. Witches mounted their brooms and flew to mountaintops, where they carried on with wild feasting, dancing and copulation with Demons and the Devil. Montague Summers observes in The History of Witchcraft and Demonology (1926), “There was not a hill-top in Finland, so the peasant believed, which at midnight on the last day of April was not thronged by Demons and sorcerers.”

In Germany, the Brocken, a dominant peak in the Harz mountains, was the most infamous site of the witch sabbats. The Harz mountains are in a wild region of northern Germany (now part of the German Democratic republic), a fitting locale for the reputed witch gatherings. So common was the belief in the sabbats that maps of the Harz drawn in the 18th century almost always depicted witches on broomsticks converging upon the Brocken.

St. Walpurga was a gentle woman who lived a life of exceptional holiness. Yet the festival that carries her name, like other sabbats celebrated by witches, became associated with diabolic activities.

Contemporary Pagans and Witches observe the holiday with traditional festivities of dancing, rituals and feasting, none of which are associated with the Devil.