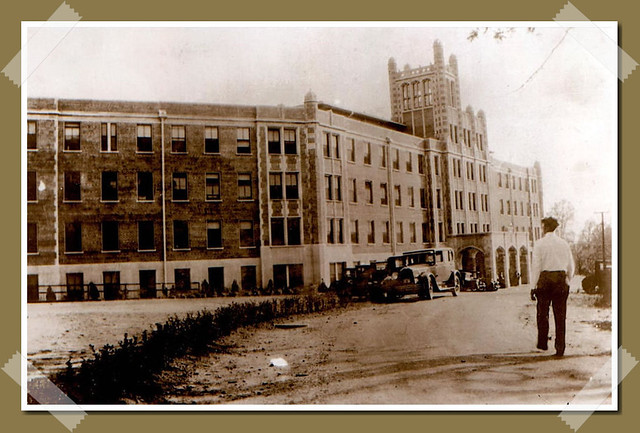 Waverly Hills Sanatorium are haunted ruins of an old tuberculosis sanatorium near Louisville, Kentucky. The Waverly Sanatorium has been investigated by numerous paranormal groups, including the LOUISVILLE Ghost HUNTERS SOCIETY.

In the 19th century, tuberculosis, the “white death,” was one of the most dreaded diseases. Highly contagious, it swept through towns, claiming thousands of victims, including entire families. There was no known cure. Doctors believed that the best treatment was rest, good nutrition, and plenty of fresh air. Thousands of victims sought out treatment centres in the countryside and mountains where they were exposed to the air, even in the chill of winter.

Louisville, Kentucky, built in a low valley, proved to be an excellent breeding ground for tuberculosis and gave Louisville the dubious distinction of having the highest infection rate in the United States. In 1910, a hospital with 40 beds was built on a hill, but soon was overwhelmed with patients.

In 1926, Waverly Hills Sanatorium was built as a state-of-the-art treatment centre for tuberculosis victims. Some actually survived, but an estimated tens of thousands died there—one an hour at the height of the epidemic. Besides exposure to fresh air, patients were treated with experimental procedures. One involved irradiation with ultraviolet light in the hope that it would kill the bacteria ravaging the lungs. Lungs were inflated with surgically implanted balloons. Some patients were subjected to hydrotherapy, which often led to life-threatening pneumonia.

Another procedure, pneumothorax, involved deflating the infected parts of lungs. Another therapy was thoracoplasty, a bloody surgical procedure performed as a last resort for the most desperate cases. The chest was cut open and muscle and up to seven ribs were removed in the hope that congested lungs would then have room to expand and breathe adequately in the chest cavity. Fewer than 5 percent of thoracoplasty patients survived.

While a small number of patients recovered, most who came to Waverly Hills left by means of the “body chute,” a tunnel that led from the sanatorium’s morgue to railroad tracks. Corpses were sent down the “death tunnel” via a motorized rail and cable system to be carried away with as little attention as possible. Staff believed that if patients knew how many were dying, they would suffer a severe psychological setback in their therapy.

By the late 1930s, the epidemic of tuberculosis was declining. In 1943, the discovery of the antibiotic streptomycin nearly eradicated it. In 1961, the sanatorium closed. It reopened a year later as the Woodhaven Geriatrics Sanitarium. Conditions were not good at Woodhaven either. Many patients were subjected to electroshock therapy, widely used at the time. In 1982, the state of Kentucky closed down the sanitarium on grounds of patient abuse. The facility was sold into private ownership.

The owner wanted to use the site to construct a shopping centre and the world’s largest statue of Jesus. He tore down all the buildings save for the main hospital, which was protected as a national historic site. He then tried to get the building condemned by allowing vandals to come in and by digging around the foundation to weaken it.

The house was abandoned and left to the elements and to thieves and vandals. Apparently the owner thought that if the house fell into dilapidation, he could prevail with his plans to tear it down. No effort was made to prevent people from entering the mansion and helping themselves to whatever they wanted—lighting fixtures, appliances, doors, bannisters, toilets, and even plumbing pipes. What the thieves did not take was damaged or destroyed by vandals. The interior was further ruined by water damage from leaks in the roof and failed gutters.

The property was sold in 2003 to the Mattingly family; by then, stories of hauntings in the abandoned and ruined hospital were rampant. The Mattinglys established the Waverly Hill Historical Society to raise funds for the extensive renovation needed to restore the hospital to its original condition. They also allow guided tours.

Almost everyone who visits Waverly, especially during the nighttime tours, experiences unusual phenomena.

Numerous ghosts and other phenomena have been reported, including:
• a little girl seen on the third floor of the hospital
• a little boy playing with a leather ball
• an old woman with bleeding hands and wrists in chains who runs from the front door screaming “Help me, somebody save me!”
• a man in a white coat who walks around the kitchen and cafeteria
• food smells wafting from the kitchen
• disembodied voices talking in unintelligible conversation or telling visitors to get out
• slamming doors
• a hearse that drives up and drops off coffins
• dark shapes or Shadow People, passing in and out of doorways in the long, dark corridors

The fourth floor has the most activity reported and is especially known for a figure of a man who crosses the corridor. On the fifth floor, room 502 is famous for two SUICIDES. In 1928, a nurse was found hanging from a light fixture there. She had been 29, pregnant, and unwed. In 1932, another nurse who worked in room 502 threw herself from the balcony and died.

Keith Age and Troy Taylor are among paranormal investigators who observed and recorded phenomena at Waverly. Taylor said that his 2002 visit to Waverly marked the first time that he was ever frightened by haunting activity. Age, Taylor, and other investigators recorded unusual fluctuations in EMF meter readings and sudden and bizarre changes in temperature.

Doors opened and slammed shut by themselves. On the fourth floor, Age was attacked by an unseen Poltergeist who caused a plastic soda bottle to fly out and hit him in the back, an overhead flourescent light fixture to swing loose and strike him on the back of the head, and a brick to fly across the air and hit him in the back.

Keith Age, (1963– ) Paranormal researcher and founder of the Louisville Ghost Hunters Society of Louisville, Kentucky, one of the largest Ghost investigation groups in…

The existing Charles Camsell Hospital was built in 1967 and closed its doors in 1996. The original part of the building housed a tuberculosis sanatorium…

Gonjiam Psychiatric Hospital, Gyeonggi-do, South Korea Image: 123rf This abandoned psychiatric hospital is famed to be one of the most haunted places in the land…

Docked along the Ohio River near downtown Louisville, Kentucky, this paddlewheel steamboat dates to 1914 when it was originally named the Idlewild. The boat was…