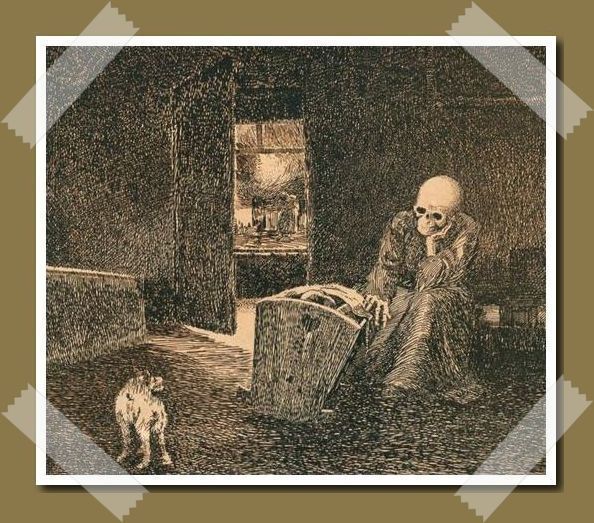 Yesterday, my sister, along with her four month old baby girl, were over for a visit. After her feeding, the baby fell asleep, so I placed her, firmly ensconced in cushions, on the living room couch for her nap. I then went to the next room for some task or the other. A while later, my sister called to me, and told me to come to the living room. When I entered, she was standing in the middle of the floor, looking toward the couch. My little dog, Tooie, was there with her, and was barking up a storm.

“Watch Tooie”, my sister told me, just as a began to scold the dog for barking and possibly waking the baby. “She's not barking at Autumn, she's not even looking in her direction.”

It was true. Autumn lay quietly at one end of the couch, and Tooie had all her attention focused on the opposite end, and continued to bark, as if she could see someone she wasn't used to, or did not immediately recognize sitting there. It was not a “fearful” bark, as though the dog were frightened of what she “saw” there, but rather a “someone's there, and I'm not sure they're supposed to be near the baby” bark. Anyone who is a pet owner knows what I mean when I say that you become familiar with the different types of signals pets give, and the understanding that grows between a pet and it's owner, so it was easy for me to read her “message”.

I watched for a few moments, then walked to the couch and sat in the location she had been barking at. After a moment or two, in which Tooie watched cautiously, she then dropped her wary stance, and I invited her to come to me.

My sister asked (the dog, mind you), “Is he gone?” Tooie then ran over to the couch, raised up on her hind legs so that she could see for herself that the baby was fine, and proceeded on her way, content.

Who or what was the dog barking at? I'm not sure, but I feel that it was a benevolent spirit, and nothing threatening to the baby. I felt nothing negative there-only warmth and peace. Perhaps our resident ghost was just checking on the sleeping child. Perhaps she was visited, for a moment,by her guardian angel. Or, as I tend to believe, it just might have been a visit from my father, checking on the grandchild he never got to see or hold. Even my sister, who is fearful of the paranormal, and somewhat skeptical, is inclined to think so.

Back to Appalachian Ghost Stories