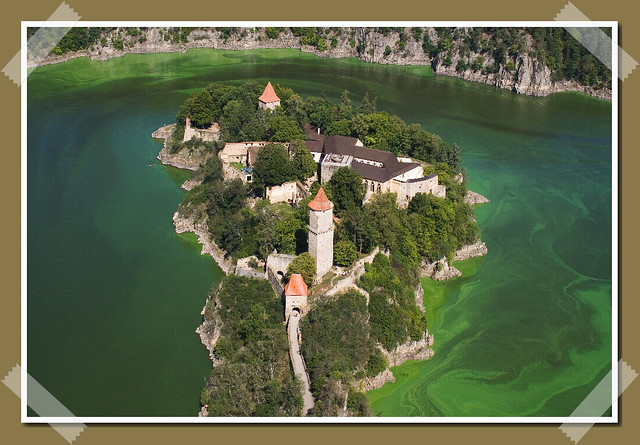 Zvíkov Castle: Until 1597 there are stories about a Zvíkovský Rarášek (Rarach is a supernatural being common in Slavic folklore, similar to an imp or trickster) which haunts people in the ancient tower, Markomanka. This tower has stones engraved with unknown symbols, and was built during the Marcomanni rule over Bohemia, in the 1st century BC and 2nd century AD. It was integrated into Zvíkov castle hundreds of years later. Weird events occur here frequently, including weird photos, technical problems, unpredictable behaviour of animals, spontaneous extinguishing of fires, electromagnetic anomalies, and the presence of ghosts. In Czech media it's a popular subject of investigation. Other areas of the castle are also haunted; it is said to be dangerous to sleep in the main tower, with anyone who does dying within a year. Another monster common in Czech culture, fire hounds are also part of the myths surrounding the castle. It is said that these spectral dogs (in some accounts they are depicted with burning eyes) are guarding a hidden tunnel underneath Zvíkov.

Nottingham Castle stands on the summit of a precipitous rock. Although a castle was built here by William the Conqueror, the present building was erected…