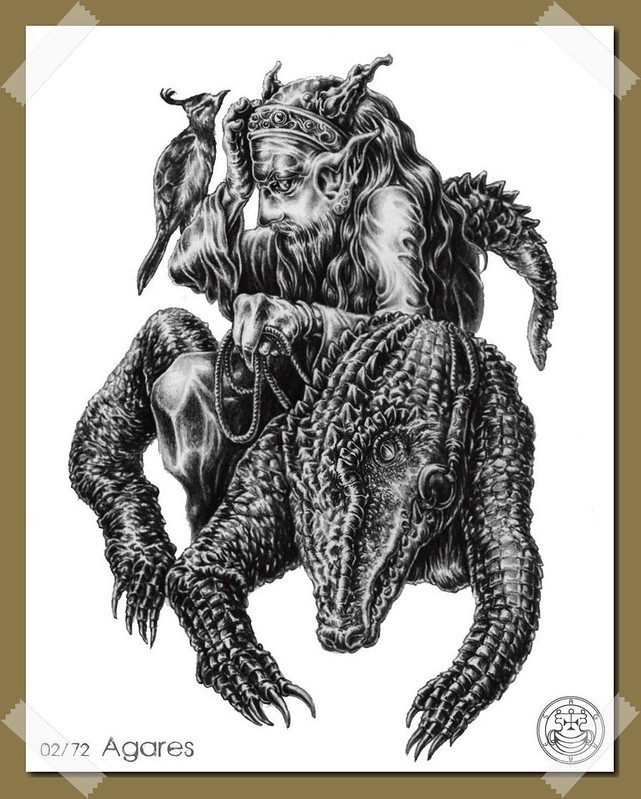 The Demon Agares is a Fallen Angel and the second of the 72 Spirits of Solomon. Prior to his fall, Agares was a member of the angelic order of Virtues. In Hell he is the first duke of the power of the east and rules 31 Legions of Demons.

He appears as a handsome man riding a crocodile and carrying a goshawk on his fist. He makes those who run stand still, and he can retrieve runaways. He teaches all languages, causes earthquakes, and destroys spiritual dignities.

According to the Goetia of Dr. Rudd, he is constrained by the angel Jeliel

The Second Spirit is a Duke called Agreas, or Agares. He is under the Power of the East, and cometh up in the form of an old fair Man, riding upon a Crocodile, carrying a Goshawk upon his fist, and yet mild in appearance. He maketh them to run that stand still, and bringeth back runaways. He teaches all Languages or Tongues presently. He hath power also to destroy Dignities both Spiritual and Temporal, and causeth Earthquakes. He was of the Order of Virtues. He hath under his government 31 Legions of Spirits. And this is his Seal or Character which thou shalt wear as aLamen before thee.

“A spirit which allows the understanding of both languages and interpretation, Agares is a spirit which accelerates the perception of languages, communication – magical and otherwise. In the design of my Sethanic /Shadow alphabet (see Austin Spare’s Alphabet of Desire), I made silent invocations to Agares – to speed the communication of the subconscious to the conscious. Earthquakes are the symbol of a strong will and individual presence. 31 legions of spirits assist in such operations.”

“Teaches languages, destroys dignities, find runaways, cause earthquakes. It is said that you should wear his sigil after the work in question. Seek Agares for wisdom in friendship and to make your garden grow. He also gives advice on financial matters with regard to projects.”

The first duke under the power of the east, is named Agares ,he commeth up mildile [i.e. he appears willingly] in the likenes of a faire old man,riding upon a crocodile, and carrieng a hawke on his fist; hee teacheth presentlie all maner of toongs, he fetcheth backe all such as runne awaie, and maketh them runne that stand still; he overthroweth all dignities hee maketh earthquakes, [lit. “and makes spirits of the earth dance”] and is of the order of vertues, having under his regiment thirtie one legions.

Aguares, of the order of the virtues who governs thirty-one legions, appears riding a crocodile and carrying a sparrowhawk. He is said to make deserters return and can cause enemies to flee. He can exalt people, teach all languages, and make the earth spirits dance.