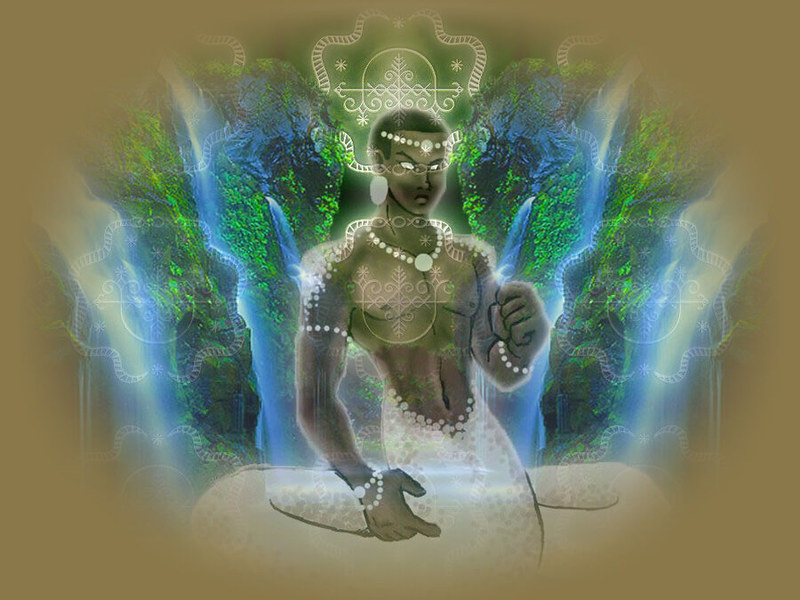 Agwé, King of the Sea, commands a beautiful ship named Immamou and is married to the alluring mermaid, La Siréne. Agwé is a military spirit, a stickler for protocol and procedure. Salute him. Don’t be too informal with him. Call him Lord Agwé or Admiral Agwé or, at the minimum, Sir.

• He bestows wealth, abundance, and prosperity.

• Anything lost at sea or resting on the ocean floor is his to give (or not).

• He is a martial spirit, an admiral who leads the lwa and devotees to victory at sea.

• Agwé receives ultimate credit for chasing off European colonials following the Haitian Revolution: they fled by sea, where Admiral Agwé drove them.

• Lord Agwé serves as a psychopomp, leading dead souls to Ginen, the Vodou realm of the dead, which is beneath the sea.

Request Lord Agwé’s protection while in the water or on the water. It is traditional to make a small offering when embarking on an ocean voyage, promising a larger one upon safe arrival. This may be done to request aid for oneself, but also on behalf of others. Tell him specifically what is needed and who or what must be protected.

Formal services for Lord Agwé are unique: they are actually held at sea and are among the most lavish and elaborate of all Vodou ceremonials. Offerings are brought out to sea on a carefully ornamented wooden raft. His presence is requested by blowing a conch shell. Divine Horsemen, an excerpt of film shot by Maya Deren in Haiti between 1947 and 1954, includes rare footage of a ceremony for Agwé.

Lord Agwé arrived in Haiti with his enslaved Dahomean devotees. (His name in the Ewe language is Aghueh; in Fon, it’s Hu.) Those who arrived safely are considered to have done so via his grace. Many victims of the slave trade were brutally tossed overboard during the voyage: Lord Agwé was there to guide them to the next realm.

Lord Agwé is syncretized to Saint Ulrich, who is usually portrayed with a fish.

Lord Agwé is usually envisioned as a fair-skinned black man with sea-green eyes. The sea-green eyes are his identifying feature. He is usually dressed in a naval uniform (his rank is admiral), but he may also manifest in the form of any creature of the sea.

Images of Saint Ulrich are used to represent him. Alternatively, a King of Cups tarot card may be used.

La Sirène; Lord Agwé is considered the epitome of a good husband, and theirs is a romantic, happy marriage. They are often venerated together and will share an altar.

Fish, eels, and frogs, but technically he has dominion over everything in the sea (flora and fauna), as well as everything on the sea (ships and boats).

Ideally offerings are brought directly to the sea. (If impossible, he will accept offerings at rivers, springs, or other sources of living water.) Send offerings out to sea by placing them on a small boat. Alternatively, toss them (respectfully!) into the sea or leave them for the tide to take. Home altars may also be built. Lord Agwé has a unique offering table: offerings are actually placed on a boat (a model boat placed on a table or a real one). Give him anything to do with the sea: small boats, sea-shells, painted ornamented oars, charms in the shape of fish or sea creatures. He likes military uniforms; things associated with the navy please him. As for food offerings, give him only the best champagne, caviar, deluxe pastries, cakes, and desserts. He has a discerning palate: if you are financially challenged, a small serving of the best you can afford is preferable to something substandard. Also offer a glass of seawater: not to drink but to evoke his realm. This may be water actually brought from the sea or a glass of pure spring water to which sea salt has been added.

Encyclopedia of Spirits: The Ultimate Guide to the Magic of Fairies, Genies, Demons, Ghosts, Gods & Goddesses – Written by Judika Illes

Agwé (Agoué, Agoueh R Oyo, Aguet) In Haitian voodoo, sea god, married to Erzulie, who as his wife is called La Sirène and is portrayed as a mermaid. Agwé’s vévé, or symbol, is a large sailboat, and his sacred colors are blue and white. With the blending of voodoo and Christian mythologies in Haiti, Agwé is often identified with St. Ulrich, a 10th-century bishop whose symbol is a fish. The Barque d’Agwé is a specially constructed raft on which offerings to Agwé are placed and then sent out to sea. Agwé’s home, Zilet en bas de l’eau (island below the sea), is where the souls of the dead live. Voodoo cultists send down ships filled with gifts to his palace below the sea.

Agwé La Flambeau This is a fiery path of water spirit, Agwé, literally “Agwé the Torch” or “Flaming Agwé.” Lord Agwé is a military commander;…

Agasou, the Leopard Spirit, is guardian of Dahomean traditions. Various theories regarding his root identity include: • Agasou is an ancestral leopard spirit. • Agasou…

La Sirène is a beautiful, classical mermaid with long flowing hair. Her name literally means “the mermaid.” She holds a mirror, which serves as a…