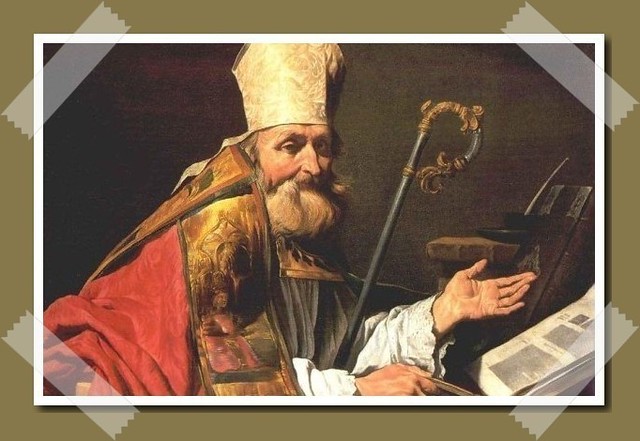 Ambrose, St. (immortal) (339–397) In Christian legend, Doctor of the Church, patron saint of beekeepers, bakers of honey-bread, domestic animals, geese, and wax refiners. Feast, 4 April. Born in Gaul and trained as a lawyer, Ambrose was elected bishop of Milan when he was 35 years old, although at the time he was not even baptized. When this was remedied, he took office and became noted for his strict discipline.

He was a close friend of St. Augustine, whose conversion he was partly responsible for, with the help of Augustine’s mother, Monica. In 384 he introduced the Ambrosian Chant from the Eastern Church, which was used until Pope Gregory the Great introduced the Gregorian Chant two centuries later. As recorded in numerous sources, such as The Golden Legend, a series of saints’ lives written in the 13th century by Jacobus de Voragine, the most famous episode in the life of St. Ambrose concerns his treatment of the Roman emperor Theodosius.

The emperor had killed some 7,000 men, women, and children as punishment for a small uprising in Thessalonica, where some of his soldiers were injured. St. Ambrose refused to let the ruler enter his church and excommunicated him. After eight months Ambrose consented to relent on two conditions: first, that the emperor should publish an edict by which no capital punishment could be executed until 30 days after conviction of a crime, and second, that the emperor should perform public penance.

Theodosius consented to the arrangement and did public penance in the bishop’s church. The scene was sometimes painted to symbolize the authority of the church over secular powers, one of the key issues during the Middle Ages. According to another legend, when Ambrose was an infant, a swarm of bees alighted on his mouth without harming him. This was taken as a sign that he would be noted for his eloquence.

The same tale is told of Plato and numerous Christian saints. Another legend tells how a prefect, Macedonius, closed his doors to the pleas of a poor criminal. When he heard of it, St. Ambrose said to Macedonius, “Thou, even thou, shalt fly to the church for refuge, and shalt not enter.” A short time afterward, Macedonius was pursued by some of his enemies and fled for sanctuary to the church.

Even though the doors were wide open, he could not find the entrance but walked around as a blind man until he was slain. In Christian art St. Ambrose is often portrayed as a bishop with miter and crosier. He sometimes holds a book or a pen with the inscription In carne vivere preter carnem angelicam et non humanam (to be nourished by food, but rather the food of angels, not of mortals).