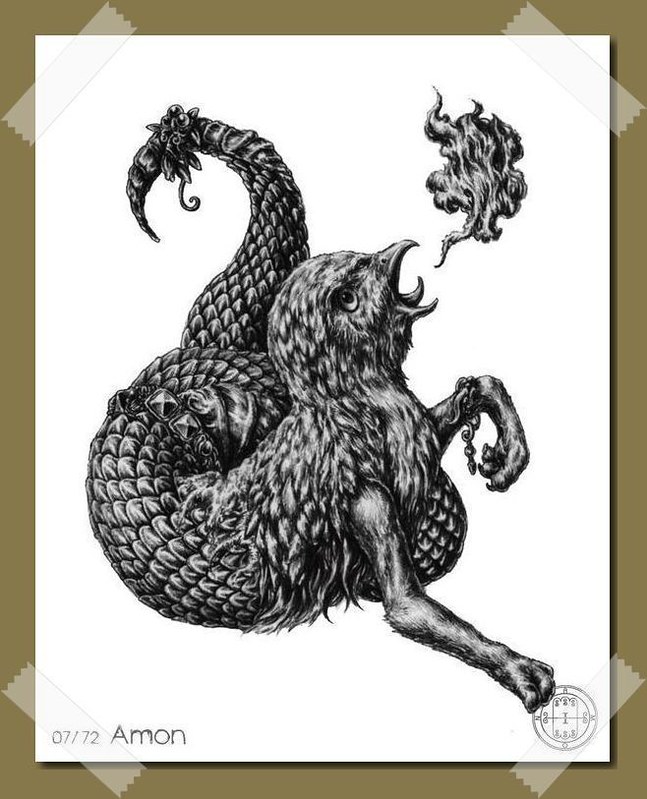 The Demon Amon is a Fallen Angel and the seventh of the 72 Spirits of Solomon. In Hell, Amon is a strong and powerful marquis. He appears first as a wolf, but on a magician’s command, he will take on the shape of a man with a raven’s head and dog’s teeth.

He accurately tells about the past and the future. He makes men and women fall in love with each other, and he settles disputes between friends and enemies. He rules over 40 Legions of Demons.

Drawing upon a manuscript copy of the Goetia, Reginald Scot records about this Demon:

“Amon or Aamon, is a great and mightie marques, and commeth abroad in the likenes of a woolfe, having a serpents taile, spetting out and breathing flames of fier; when he putteth on the shape of a man, he sheweth out dogs teeth, and a great head like to a mightie raven; he is the strongest prince of all other, and understandeth of all things past and to come, he procureth favor, and reconcileth both freends and foes, and ruleth fourtie legions of divils.”

Collin de Plancy took the artistic liberty of compressing Amon's two forms into one.He should have been represented as either a fire-breathing wolf with a snake for a tail,or as a man with a raven's head that had doglike teeth in its beak.Demons often appear in two primary forms, the first of which is wilder and more frightening, but the second, human with only a few bestial traits. It is up to the magician to command the evoked Demon to put on its human guise so that communication with it can be made more easily, and with less risk of injury. You can see this dual appearance of Demons in the two images of the Demon Camio.

The Seventh Spirit is Amon. He is a Marquis great in power, and most stern.
He appeareth like a Wolf with a Serpent’s tail, vomiting out of his mouth flames of fire; but at the command of the Magician he putteth onthe shape of a Man with Dog’s teeth beset in ahead like a Raven; or else like a Man with a Raven’s head (simply). He telleth all things Past and to Come. He procureth feuds and reconcileth controversies between friends. He governeth 40 Legions of Spirits. His Seal is this which is to be worn as aforesaid, etc.

Amon, or Aamon, is a great and mightie marques, and commeth abroad in the likenes of a woolfe, having a serpents taile, [vomiting] flames of fier; when he putteth on the shape of a man, he sheweth out dogs teeth, and a great head like to a mightie [night hawk]; he is the strongest prince of all other, and understandeth of all things past and to come, he procureth favor, and reconcileth both freends and foes, and ruleth fourtie legions of divels.

Amon, who commands forty legions, can appear in the form of a wolf with a serpent’s tail and vomiting flames. In human form, he has the head of an owl and his beak shows canine teeth. He was the supreme deity of the Egyptians, who had blue skin in human form. Amon can tell of the past and the future, and reconcile the differences between friends.

Aamon, Grand MARQUIS OF Hell, is the Demon of life and reproduction. He is described both as having the head of a serpent and the body of a wolf (and vice versa) as well as having a raven’s head with canine teeth set upon a man’s body. According to Christian Demonology, it is believed that he is most powerful during the day and has the ability to project flames from his mouth. Aamon is summoned for his knowledge of the past and his ability to predict the future.

He also has the ability to reconcile friends who have become enemies as well as being able to secure the love of another to the one who summoned him. He is in direct service under the Demon SatanACHIA. Aamon commands forty infernal legions and is one of the four personal ASSISTANTS OF ASHTAROTH (see ASHTAROTH).

The seventh spirit mentioned in the Goetia, he is also a part of Christian Demonology, as he is mentioned in The Grimoire of Pope Honorius. Oftentimes Demonologists will associate him with both the Egyptian god Amun and the Carthaginian god Ba’al Hammon.