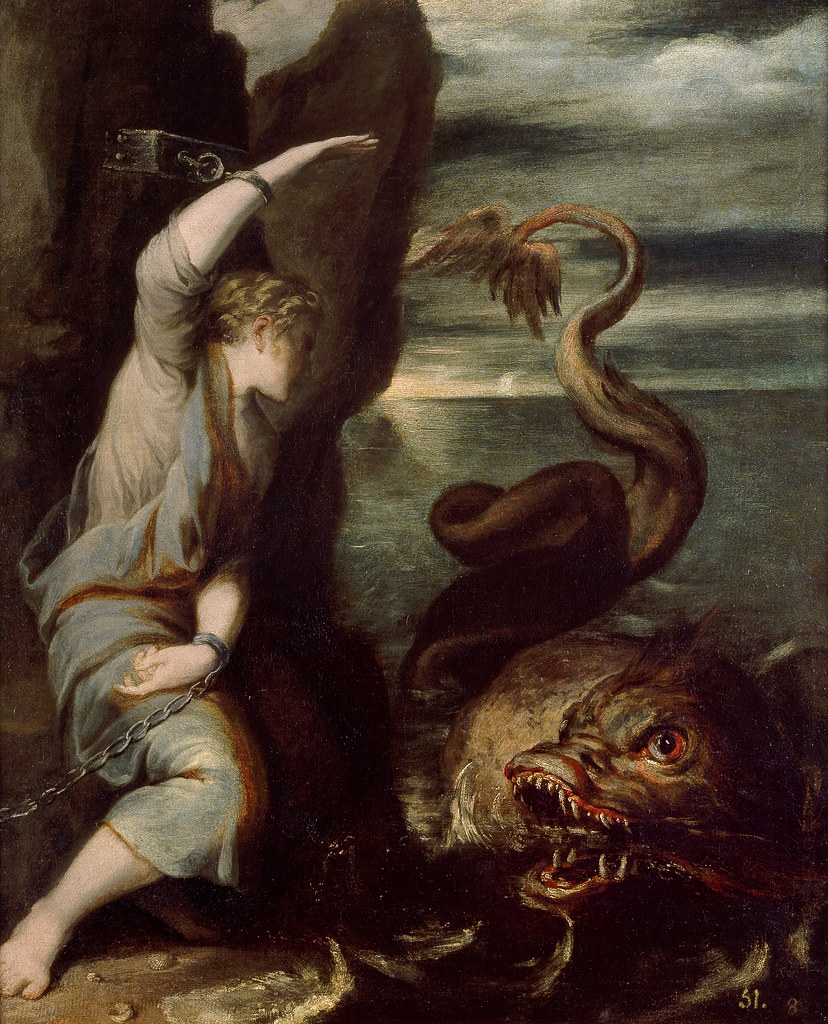 ANDROMEDA AND THE MONSTER BY JUAN ANTONIO FRIAS Y ESCALANTE

Andromeda (ruler of men) In Greek mythology, heroine saved by Perseus; daughter of the Ethiopian king Cepheus, a son of Belus by Cassiopeia; wife of Perseus; mother of Alcaeus, Electryon, Heleus, Nestor, Perses, Sthemelus, and Gorgophone. Cassiopeia had boasted of being more beautiful than any of the Nereids, and Poseidon, to punish her arrogance, sent a flood and a sea monster. An oracle promised an end to the plague that resulted only if Andromeda were to be exposed to the monster, so Cepheus chained his daughter to a rock in the sea. Andromeda was saved by the hero Perseus and promised to him in marriage. At the wedding a violent quarrel arose between the king’s brother Phineus (who previously had been betrothed to Andromeda) and Perseus. The hero turned his rival into stone by showing him the Gorgon’s head. Andromeda followed Perseus to Argos and became the ancestress of the Perseidae. Athena set Andromeda among the stars at her death. Milton makes reference to this in Paradise Lost (book 3.559). There are numerous paintings of the rescue scene, among the most famous being Perseus and Andromeda by Peter Paul Rubens. Other works are by Titian, Piero di Cosimo, and Ingres, as well as an earlier fresco at Pompeii. There are some 20 operas about Andromeda, one by the brother of Franz Joseph Haydn, J. M. Haydn (1737–1806) called Andromeda e Perseo.

Cassiopea (Cassipea, Cassiope, Cassiopeia) (cassia juice) In Greek mythology, the wife of Cepheus, king of Ethiopia; mother of Andromeda and of Atymnius by Zeus. Cassiopea…

Perseus (destroyer) In Greek mythology, hero, son of Zeus and Danaë. When Perseus was a baby, his grandfather Acrisius was warned by an oracle that…

Danaë (laurel, bay) In Greek mythology, mother of the hero Perseus; daughter of King Acrisius of Argos and Eurydice; sister of Evarete. Acrisius had been…

Acrisius (lacking judgment) In Greek mythology, king of Argos, son of Abas and Aglaia; great-grandson of Danaus; and brother of Proteus. After an oracle told…

Pegasus (of the springs) In Greek mythology, a winged horse who sprang from the blood of the slain Gorgon Medusa when her head was cut…