The largest Pagan Druid organization and church in the world. Ar nDrmocht Fein is Irish Gaelic for “Our Own Druidism.” The ADF has no direct links to the ancient Druids but is a reconstruction of Druidic and Indo-European pagan rituals and religious traditions.

It was founded in 1983 by P. E. I. ISAAC Bonewits, former Archdruid of several groves within the now defunct Reformed Druids of North America. Bonewits served as Archdruid for 10 years and remains active in the organization.

In an open letter in 1983, Bonewits outlined his vision for creating a modern, Neopagan Druidic religion. “I see Druids as being artists and intellectuals, magicians and clergy, holders of the highest wisdom their cultures (or subcultures) have to offer,” he said. ADF integrates religion with alternate healing arts, ecology-consciousness, psychic development and artistic expression.

It is organized in groves, many of them named after trees. The oak tree is sacred, as it was to the ancient Druids. The groves observe eight seasonal High Days that coincide with the Sabbats observed in Wicca and conduct regular study and discussion groups and a wide range of artistic activities. Through study and training, members advance through a series of five circles, the fourth of which is the equivalent of a master’s degree, and the fifth the equivalent of a doctorate.

The idea of the circle structure was borrowed from the Church of All Worlds. Worship and rituals usually are conducted outdoors. ADF is polytheistic, and recognition of various deities depends on the individual grove and the purpose of the rites. The one deity who is worshiped at every ritual is the Earth-Mother (Mother Nature). The Three Kindreds of deities, ancestors and nature spirits of the Three Worlds — Land, Sea and Sky — are invoked.

The Waters of Life, passed or asperged in rites, represent the spark of immanent deity. Liturgy and rituals are based upon scholarly research of old Indo-European religious, folk magic, art and social customs. The research is ongoing and involves translation of numerous foreign and archaic language texts. The ADF claims no unbroken lineages or traditions and does not promote any “one right and true way” of Druidism.

1. The consecration of time and space; the psychic centering, grounding and unifying of the participants into a “groupmind.”

2. The opening of the Gates Between the Worlds and the starting of a flow of energy back and forth between participants and deities.

3. The raising and sending of the major part of the congregation’s energy to the deities being worshiped.

4. The returning of power from the deities to the congregation.

5. The reversing of the rite’s beginnings and the clos- ing down of the psychic, magical and spiritual energy fields that were created.

ADF rituals are not conducted within barriers such as a Magic CIRCLE, and participants can come and go while rituals are in progress. Sacrifices made to the deities include tree branches, fruits, flowers and vegetables. Although animal, even human, sacrifices were performed in most paleo-Pagan religions, they are strictly forbidden in ADF rituals, as well as in neo-Paganism in general.

Clergy wear long white robes; members of the congregation are encouraged to dress in paleo-Pagan garb. Bone- wits introduced the white beret as a signature of ADF; the berets and any headcoverings are removed upon entrance to a ritual site, except during very hot weather. The ADF’s sigil, a circle pierced by two vertical parallel lines, was first associated with neo-Pagan Druidism by David Fisher, the founder of the Reformed Druids of North America. The sigil may have been taken from the shape of a foundation of an old Roman-Celtic temple.

The logo, a branch sprouting from an oak tree stump, is a Celtic rendition inspired by the badge of the Scottish MacEwen clan. The only piece of dogma espoused by the ADF is the Doctrine of Archdruidic Fallibility.

The Archdruid does not have all the answers and can make mistakes.

Bonewits, P. E. I. (Isaac) (1949-2010 ) was an American Pagan, author and scholar, and a leader in contemporary Druidry and Paganism. Philip Emmons Isaac…

Druids An exalted caste of Celtic priests. Little is known about the Druids. Reconstructions of their tradition form a central part of Paganism. The Celts… 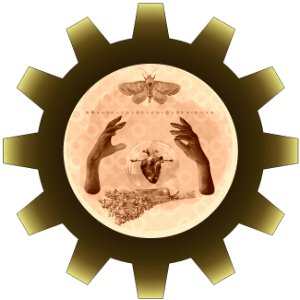 A ritual is a prescribed form of ceremony to achieve a transformation of consciousness. All religions and spiritual, mystical and magical traditions have their own…