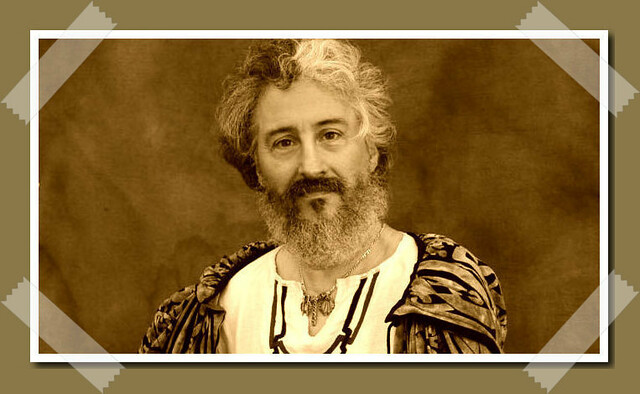 Philip Emmons Isaac Bonewits was born October 1, 1949, in Royal Oak, Michigan — the perfect place, he likes to joke, for a future Archdruid. The fourth of five children (three girls, two boys), he spent most of his childhood in Ferndale, a suburb of Detroit. When he was nearly 12, the family moved to San Clemente, California.

From his mother, a devout Roman Catholic, Bonewits developed an appreciation for the importance of religion; from his father, a convert to Catholicism from Presbyterianism, he acquired skepticism. His first exposure to magic came at age 13, when he met a young Creole woman from New Orleans who practiced “voodoo.” She showed him some of her magic, and so accurately divined the future that he was greatly impressed. During his teen years, he read extensively about magic and parapsychology, and was fascinated by the power of the mind. He also read science fiction, which often has strong magical and psychic themes.

In his second semester of ninth grade, Bonewits entered a Catholic high school seminary because he wanted to become a priest. He soon realized that he did not want to be a priest in the Catholic faith. He returned to public school and graduated a year early. After spending a year in junior college to get foreign-language credits, he enrolled at the University of California at Berkeley in 1966. At about the same time, he began practicing magic, devising his own rituals by studying the structure of rituals in books, and by observing them in various churches.

His roommate at Berkeley, Robert Larson, was a self- professed Druid, an alumni of Carleton College, where Isaac Bonewits had been born in 1963. Larson interested Bonewits in Druidism, and initiated him into the RDNA. The two established a grove in Berkeley. Bonewits was ordained as a Druid priest in October 1969. The Berkeley grove was shaped as a contemporary Pagan religion; other RDNA groves considered the order a philosophy.

During college, Bonewits spent about eight months as a member of the Church of Satan, an adventure which began as a lark. The college campus featured a spot where evangelists of various persuasions would lecture to anyone who would listen. As a joke, Bonewits showed up one day to perform a satirical lecture as a Devil’s evangelist. He was so successful that he did the act repeatedly, and soon was approached by a woman who said she represented Anton LaVey, the founder of the Church of Satan. Bonewits attended the church’s meetings and improved upon some of their rituals — he was never seduced, as the woman had promised — but dropped out after personality conflicts with LaVey. The membership, he found, was largely middle-class conservatives who were more “right-wing and racist” than satanist.

At Berkeley, Bonewits created his own degree program, graduating in 1970 with a bachelor of arts degree in magic — the first person ever to do so at a Western educational institution. He also was the last to do so in the United States. College administrators were so embarrassed over the publicity about the degree that magic, witchcraft and sorcery were banned from the individual group study program.

His first book, Real Magic, about magic, ritual and psychic ability, was published in 1971.

In 1973, Bonewits met a woman named Rusty. They moved to Minneapolis, where they were married. For a year and a half, Bonewits edited Gnostica, a Pagan journal published by Carl Weschcke of Llewellyn Publications, but his scholarly approach was not popular with many of the readers.

Bonewits remained in Minneapolis for about another year. He established a Druid grove called the Schismatic Druids of North America, a schism of the RDNA. He also joined with several Jewish Pagan friends and created the Hasidic Druids of North America, the only grove of which existed briefly in St. Louis, where its membership overlapped with that of the Church of All Worlds. In 1974-75, Bonewits wrote, edited and self-published The Druid Chronicles (Evolved), a compendium of the history, theology, rituals and customs of all the reformed Druid movements, including the ones he invented himself.

He also founded the Aquarian Anti-Defamation League (AADL), a civil liberties and public relations organization for members of minority belief systems, such as the Rosicrucians, Theosophists, Pagans, Witches, occultists, astrologers and others. Bonewits served as president of the AADL and devoted most of his income — unemployment insurance — to running it. The organization scored several small victories in court — such as restoring an astrologer to her apartment after she had been evicted because a neighbour told her landlord that her astrology classes were “black magic Séances.”

Bonewits and Rusty divorced in 1976 and he returned to Berkeley. The AADL disintegrated shortly after his departure.

In Berkeley, Bonewits rejoined the RDNA grove and was elected Archdruid. He established The Druid Chronicler (which later became Pentalpha Journal) as a national Druid publication in 1978. After a few clashes with members, he left the organization. Pentalpha Journal folded.

In 1979, he was married for a second time, to a woman named Selene. That relationship ended in 1982. In 1983, he was initiated into the New Reformed Order of the Golden Dawn. The same year, he married again, to Sally Eaton, the actress who created the role of the hippie witch in the Broadway musical Hair. They moved to New York City in 1983.

Since the late 1960s, Bonewits had worked as a freelance journalist, and, since college, had earned a sporadic living from writing and editing. In 1983, he entered the computer technology field as a technical writer for a firm in Manhattan. He left that over an ethical matter and became a self-employed computer consultant for small businesses.

In 1983 in New York, Bonewits met Shenain Bell, a fellow Pagan, and discussed the idea of starting a Druidic organization. The religious fellowship, Ar nDraiocht Fein (“Our Own Druidism” in Gaelic), was born, with no ties to the ancient Druids or to the RDNA. Bonewits became Archdruid and Bell became Vice Archdruid.

Bonewits and Eaton parted company in 1986. He moved to Nyack, New York, in November 1987 with his intended fourth wife, Deborah, a Wiccan high priestess. He continued work as a computer consultant and worked on the building of the ADF. He and Deborah married; a son, Arthur, was born in 1990.

The ADF grew, but more slowly than Bonewits had envisioned. A clergy training program was launched, but a seminary facility was not created. A prolific author, Bonewits wrote numerous articles and essays on Druidry, magic and Paganism. He predicted that Paganism would become a mainstream religion with millions of members.

In 1996 he resigned as Archdruid of the ADF due to the debilitating effects of eosinophilia myalgia syndrome, which also prevented him from working as a computer consultant. He retained his life membership in the ADF and devoted himself to his writing. His Authentic Thaumaturgy 2.0, a new edition of Real Magic (revised in 1979) designed for players of fantasy games, was published in 1998.

Bonewits and Deborah separated in 1999 and divorced in 2007. In 2004 he handfasted, then in 2007 married, Phaedra Heyman, a former vice president of the Covenant of Unitarian Universalist Pagans. The couple lives in Nyack, New York, but they plan to move to Ashland, Oregon, in 2008. Bonewits’ other published books are Rites of Worship (2003), The Pagan Man (2005), Bonewits’ Essential Guide to Druidism (2006), Bonewits’ Essential Guide to Wicca and Witchcraft (2006) and Neopagan Rites (2007). With Phaedra, he coauthored Real Energy: Systems, Spirits and Substances to Heal, Change and Grow (2007).

Bonewits is also a songwriter and singer and has performed at Pagan gatherings.

Bonewits has had involvements with Santeria, the Caliphate Line of the Ordo Templi Orientis, Gardnerian Wicca, and the New Reformed Orthodox Order of the Golden Dawn, as well as others.

Isaac Bonewits writes of Witchcraft from its disputed origins, to the Inquisition, to its re-invention in the 20th century. A scholarly, pungent, witty and sometimes…

Examines every category of occult phenomena from ESP to Eastern ritual and explores the basic laws of magic, relating them to the natural laws of…

The largest Pagan Druid organization and church in the world. Ar nDrmocht Fein is Irish Gaelic for “Our Own Druidism.” The ADF has no direct…

Deborah Lipp: Gardnerian witch, Druid, author and activist. Deborah Lipp was born in Philadelphia and grew up in New Jersey, New York and Massachusetts. She…