Astragalomancy, also known as astragyromancy, is a form of divination that uses random castings of bones or dices, especially marked with letters and numbers.

From astragalos ('dice' or 'knucklebone'), a Greek word refering to the knucklebone or vertebra of an animal

Originally, as with dice games, the “dice” were quadruped knucklebones or other small bones. Marked astragali of sheep and goats are common at Mediterranean and Near Eastern archaeological sites, particularly at funeral and religious locations. For example, marked astragali have been found near the altar of Aphrodite Ourania in Athens, Greece suggesting astragalomancy was performed near the altar after about 500 BC. Modern dice as we know are believed to have been first used by the Egyptians around 1400 BC. Romans divined with 'Astragals', the knuckle bones of sheep. Greek dice divination, associated with the gods Hermes and Athena, was very popular among the people.

Numbers on the dice were associated with letters to form words that had a bearing on questions asked by the diviner. Sometimes used was an associated primarily ritual of writings questions on paper and passing it through the smoke of Jupiter wood. In another method, the bones were thrown and readings were taken either from the position of the bones, the nature of the upward pointing side, or from the arrangement formed upon a formal pattern or grid in a similar fashion as geomancy.

European fortunetellers used a simplified and formulaic dice divination system descended from the late antique astrological practice called 'The Part of Fortune'. Dice representing the planets would be thrown onto an astrological diagram of the 'Houses'. The result was read as the part that luck would play in the different areas of a person's life.

The Metropolitan Museum of Art shows bone “dice” used by the Shona people of Africa. These are called Hakata. They have been in use for thousands of years, and remain extant. Although dice sets are most commonly used for this form of divination, diviners (banganga) may also employ collections of shells, seeds, or bones. This practice is also found among neighboring Venda, Tsonga, and Batoka peoples.

The earliest description of the use of hakata divination is documented by a Portuguese visitor to the region in 1586: All these [people] before undertaking anything, whether it be a journey, business or planting, cast lots to discover if the issue will be fortunate or not, and if the lot is not favourable they put off their business for that day. . . . These pieces of wood, or lots, the [people] call “chacatas,” and every [man] carries these “chacatas” with him threaded on a string in order to use them when any doubt arises. In such a case he throws them, as we throw dice, several times, and they say that they are thus shown whether a thing be good or evil.

The Dalai Lama is reported as using the MO (Tibetan Dice Divination) to determine a question over whom to appoint to an important position[citation needed]. Tibetan Divination has long featured the MO, or dice, in making everyday decisions. There are books written by various Lamas on interpretations for the casting of dice.

The standard way of divining with dice these days is to draw a 12″ circle on a piece of cloth and then divide it with lines into 12 equal segments, the lines pointing as though to the numbers on a clock. Each segment in between is numbered, starting with 12 to the right of the 12 O'clock position and working clockwise down to 1 in the 11 O'clock position.

The two dice roll Cleromancy – For asking a question.

This system was used by the ancient Tibetans. The same rule applies concerning dice rolling out of the circle, but if one dice lands on top of another and stays there, it means that the querant will either receive a gift, something of value, or be forewarned about a situation – This to be interpreted by the Reader.

A list of twenty possible answers – numbered from four to twenty-four – must be written out. A pair of ordinary dice is then thrown and their numbers added together and written down. A second cast of the die is performed, and their numbers are added to the first. The resulting number is then matched to the corresponding answer on the numbered list. According to ancient occult tradition, Mondays, Tuesdays, Wednesdays, Thursdays and Saturdays are the most favourable days of the week for the casting of the dice. You should not attempt it on Fridays and Sundays.

System of divination practiced by throwing black and white beans, little bones or dice, or stones—anything, in short, suitable for lots. A method of practicing… 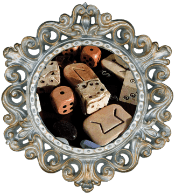 Type of Divination : Sortilege (cleromancy). This consists of the casting of lots, or sortes, whether with sticks, stones, bones, beans, coins, or some other…

Hakata is a South African form of divination that uses bones or dice. Methods African witch used pieces of bone, ivory or wood for divination.…

Secret societies have both fascinated and frightened people for hundreds of years. Often the infamous Illuminati is mentioned as the core of conspiracies which span…

Plastromancy is a form of divination using the plastron, or undershell of a turtle. Etymology Derived from the English plastron and Greek manteia ('prophecy') History…