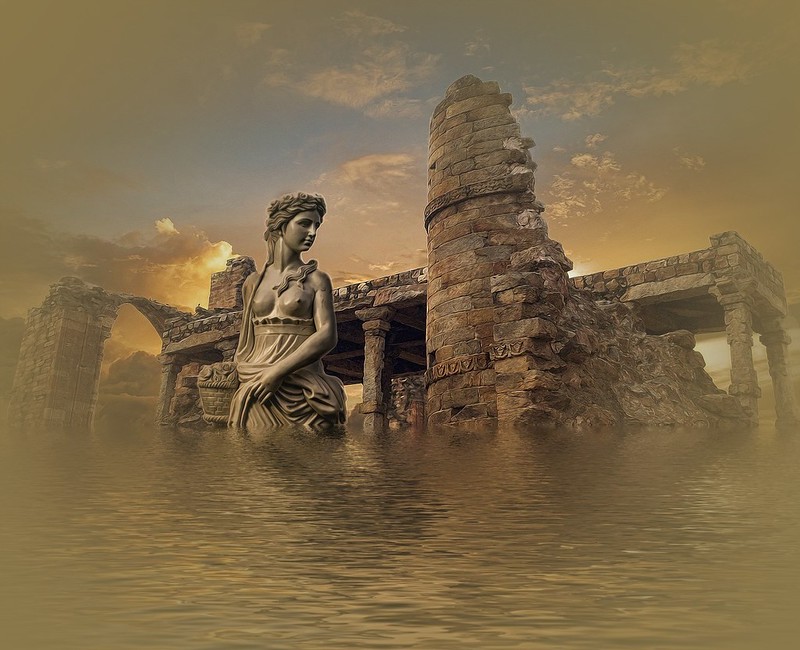 According to legend, Atlantis was an island that disappeared beneath the ocean after a massive earthquake. The ﬁrst written accounts of this event were in two works of the ancient Greek philosopher Plato (428– 348/347 B.C.), Timaeus and Critias, in which Plato mentions Atlantis as an example of a utopian society. Citing his source as Solon, a Greek statesman who, well over a century earlier, had received his information about Atlantis from Egyptian priests, Plato says that nine thousand years earlier Atlantis had been an island empire located in the Atlantic Ocean near Gibraltar. Its people were aggressive expansionists who conquered many lands— until they attacked Athens. At this point, the gods decided to defend Athens by destroying Atlantis, whereupon the island experienced massive earthquakes and ﬂoods that wiped out its entire civilization. The island then sank beneath the sea, leaving no trace of its existence.

Skeptics believe that Plato’s tale of Atlantis was nothing more than an allegory created to make a point: that no matter how advanced, a civilization that ignored its gods in favour of material comfort was doomed. But those who believe that Atlantis really existed argue that Plato provided far more details about the place than would have been necessary in order to make a moral point. In fact, Critias offers elaborate descriptions of Atlantis’s architecture, engineering, and ceremonies that would be completely unnecessary if Atlantis were only a literary device. Moreover, Plato himself stated that the story of Atlantis was true, and historians know that the source he had cited, Solon, was a real Greek statesman who had visited Egypt and would have had the opportunity to hear the stories, just as Plato claimed.

Believers in Atlantis disagree, however, on whether Plato was correct in saying that the civilization was located on an island in the Atlantic Ocean near Gibraltar. Those who believe that Atlantis was located there base their view on arguments put forth in Atlantis: The Antedeluvian World, published in 1881. Its author, Ignatius Loyola Donnelly, accepted Plato’s description of Atlantis as real and accurate. Moreover, Donnelly concluded that all the world’s ancient civilizations stemmed from one even older civilization, which in his mind could only have been Atlantis. He theorized that the Atlanteans were the ﬁrst civilized humans; that the royal family of this
island eventually spread out over the world to create other, similar civilizations in Egypt, India, and elsewhere; and that based on the places where the ﬁrst of these civilizations developed, Plato’s theory of the location of Atlantis made sense.

Others, however, argue that Atlantis was not located on a now-submerged island near Gibraltar. Instead, they contend that it was actually on the island of Crete. These individuals argue that archaeological evidence suggests that in around 1500 B.C. an advanced civilization, the Minoans, was located there and was much like Plato’s Atlantis. In particular, Plato said that the Atlanteans worshipped the bull, and the Minoans worshipped the bull as well. Another theory places Atlantis on the island of Thera, 60 miles (97km) north of Crete, where a massive volcanic eruption struck in approximately 1625 B.C. Archaeological expeditions have uncovered evidence of bull worship on Thera, and some archaeologists believe that it was once the center of the Minoan civilization. In his 1991 book, Unearthing Atlantis: An Archaeological Odyssey, Dr. Charles Pellegrino—an expert in crustaceology, paleontology, marine archaeology, and advanced rocketry—connects artifacts from this civilization to Atlantis mythology by showing how various archaeological discoveries ﬁt in with Plato’s descriptions of Atlantean objects and customs.

Some people, however, argue that while Plato’s descriptions were correct, he was wrong in saying that Atlantis was an island in the Atlantic Ocean. They believe that Atlantis was in a different ocean and/or was a continent instead of an island. A few people have suggested that Atlantis was located on the peaks of the Andes Mountains. Some think that after Atlantis the ocean swallowed Atlantis, the civilization continued to exist in underwater caverns. Still others think Atlantis was swallowed by the land rather than the sea and still exists within caves deep beneath Earth’s surface. One place commonly mentioned by such people is the area beneath the Great Sphinx in Egypt, perhaps at least partially inspired by Plato’s reference to ancient Egypt.

This Egyptian connection has led some people to believe that the Atlanteans were actually extraterrestrials whose wisdom and technology-enabled the ancient Egyptians to build their great pyramids and statues. Such people have theorized that Atlantis was actually a planet whose inhabitants settled on Earth after their own world was destroyed by a global nuclear war, environmental damage, or some other disaster. Others have suggested that Atlantis is an alien world within the center of a hollow Earth and that the former extraterrestrials who live in this world sometimes venture out to abduct and study human beings.

People who subscribe to such theories often base their beliefs on descriptions of Atlantis provided by individuals who claim to have ﬁrsthand knowledge of the civilization. For example, nineteenth-century psychic Helena Petrovna Blavatsky said that she knew what Atlantis was like because of her mental powers, while the faith healer and self-proclaimed prophet Edgar Cayce (1877–1945) professed to know about Atlantis because in a past life he had lived on Atlantis. In 1977 a woman named J.Z. Knight from Tacoma, Washington, claimed that she was able to channel the spirit of an Atlantean warrior named Ramtha, and ever since then she has been transmitting his words about Atlantis, Lemuria (another legendary “lost world”), and other subjects to paying audiences.

Atlantis in the Caribbean : And the Comet That Changed the World – Andrew Collins

The History of Atlantis -Lewis Spence

Discover Atlantis : A Guide to Reclaiming the Wisdom of the Ancients – Diana Cooper & Shaaron Hutton