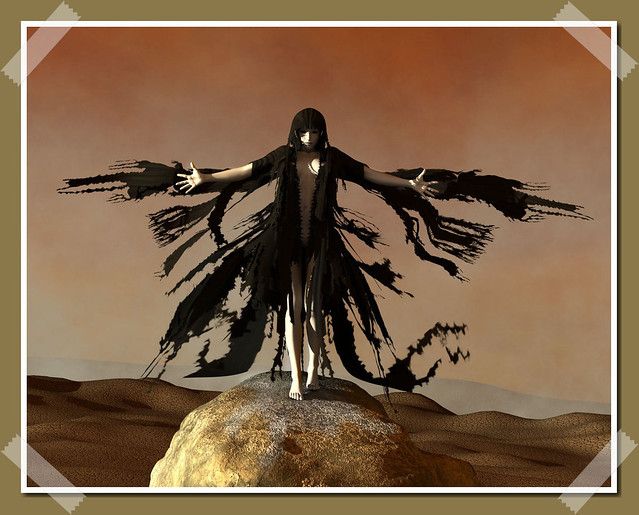 A banshee is a female Death Omen spirit of Ireland and Scotland that attaches itself to families—especially those whose surnames begin with “Mac” and “O”—and manifests to herald an approaching death in the family. There are variations of the banshee in Irish and Scottish lore.

An Irish variant, written as Bean Si, is said to be beautiful with long streaming hair, and wearing a gray cloak over a green dress. She also appears all in white or all in red. Her eyes are fiery red from continual crying for the about-to- be-departed. To warn a family of a coming death, the banshee most commonly is heard singing or crying, but is not seen. When seen, she appears as a woman singing, or as a shrouded woman wearing a veil, or as a flying figure in the moonlight, crying bitterly. The cry reportedly is so mournful that it is unmistakably the sound of doom. Contrary to some popular thought, banshees do not wail.

In both Ireland and the Scottish Highlands, the banshee is also known as Bean-Nighe or Little-Washer-bythe- Ford; the latter term comes from the lore that she signals a person’s imminent and violent death by washing his blood-stained grave-cloths in a stream. The Bean- Nighe or Little-Washer-by-the-Ford is believed to be the spirit of a woman who died a premature death in childbirth, whose spirit must continue washing clothes until it is the time for her natural destined death. Small and usually dressed in green, this spirit is not beautiful like the Bean Si, but is evil, mean and deformed. She has just one nostril, a large protruding front tooth, red webbed feet and long pendulous breasts. The person who is courageous enough to suck a breast is believed to be granted a wish by the spirit and become her foster child.

Banshee beliefs were taken to America with immigrants, many of whom settled in the Allegheny and Appalachian mountains and in the mid-Ohio Valley. A few stories about them have entered into American folklore. One example is the coach-a-bower of Mineral Wells and Elizabeth, West Virginia. The coach-a-bower is known in Gaelic lore as the coiste bodhar, a black hearse with a coffin strapped on top, drawn by two headless white horses. The hearse is a death omen that precedes the appearance of the banshee, pulling up to a household where someone is about to die.

The modern West Virginia version is a black automobile hearse with velvet curtains that are pulled shut. The vehicle dates to the 1950s and is seen driving along route 14.

Another example is the banshee of Marrtown, West Virginia, a town with many Scottish immigrants who arrived in the early 19th century. The banshee is a shrouded figure who rides a white horse. According to lore, the banshee first appeared to the founder of the town, Thomas Marr, a Scottish immigrant who arrived in 1836, and his West Virginia wife, Mary. The banshee announced Thomas Marr’s death. The Marrs ran a farm and, like many people, fell on hard times during the Civil War. After the war, Thomas got a job as a night watchman on a bridge near Marrtown.

On several occasions, Marr spotted the shrouded rider as he traveled to and from work. He could not make out the gender, though he thought it was a woman. The figure and horse always vanished as he approached them.

Marr told Mary about the mysterious figure. On February 5, 1876, he went to work one night and never returned. While Mary waited for him, the shrouded figure rode up to the farmhouse and announced that Thomas was dead. The manner of his death is not known.

When Mary died at age 90, the shrieks of a woman were heard near her house where her corpse was laid out, and the sounds of rattling chains came from the attic.

Another folktale comes from the American South, set in Revolutionary War days. According to the tale, a banshee haunted the muddy Tar River near Tarboro in Edgecombe County, North Carolina. She arose on misty nights when there was no moon, and flitted from shore to shore crying like a loon, her long yellow hair streaming behind her.

The Tar River mill was run by a large, rough man named David Warner, a Whig who hated the British and aided the revolutionaries by giving them wheat and corn ground at his mill. One hot August noonday, Warner was warned that British soldiers were coming and was urged to flee, lest he be killed. He stubbornly refused to leave.

Warner was grinding grain when five British soldiers arrived. He pretended not to see them and loudly announced to his assistant, “Try to save every precious ounce of it, my lad, and we’ll deliver it to General Greene. I hate to think of those British hogs eating a single mouthful of gruel made from America’s corn.”

With that, the enraged soldiers seized Warner, beat him and announced they were going to drown him in the river. Warner told them to go ahead and do so, but the banshee would get them in return.

The soldiers hesitated, but one who had Evil Eyes and a cruel mouth egged them on. He and two others tied Warner’s hands behind his back, tied large stones to his neck and feet, and cast him into the river. As Warner sank beneath the water, a piercing, agonizing woman’s scream arose from somewhere along the riverbanks. The frightened soldiers fled back to the mill.

That night, the soldiers’ commander and his officers arrived, and they all bedded down. A new moon rose in the sky and a rain crow (cuckoo) called out, presaging rain. Suddenly the air was pierced by the banshee’s cry.

The commander and officers rushed out of their tent and saw a cloud of mist over the river take on the shape of a woman with long, flowing hair and a veil. She disappeared, and her cry could be heard farther downstream.

The three soldiers confessed their crime. The commander sentenced them to remain at the mill, grinding, for the rest of their lives. Every day, the men ground grain, and at night they were tormented by the banshee’s cry. One night, she appeared in the doorway of the mill and drew aside her veil. She lured two of the men down to the river, where they fell in and were never seen again. The soldier with the Evil Eyes went insane and began wandering through the woods calling out Warner’s name. He was answered by the banshee. One day, his body was found floating in the river, at the spot where Warner had been drowned.

On August nights when the moon is new and the rain crow calls for rain, the banshee is still said to rise up out of the mist where Warner was drowned, and cry into the night.

Taken from: The Encyclopedia of Ghosts and Spirits– Written by Rosemary Ellen Guiley–  September 1, 2007

To read more about this subject click on the next page