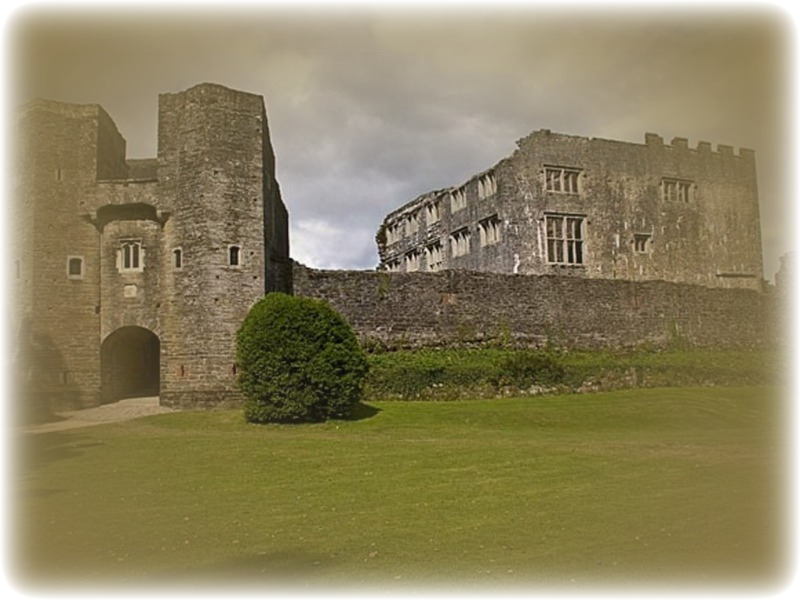 Berry Pomeroy Castle is a haunted ruined castle in the wild countryside at Berry Pomeroy, Devon, England. The brooding ruins are said to be inhabited by at least three ghosts. A strange atmosphere pervades the grounds and leaves visitors with unexplained feelings of terror and foreboding.

According to legend, the hauntings trace back to the original owners of the castle, the de la Pomerai (Pomeroy) family, which owned it from the time of the Norman Conquest (1066) until 1548, when they sold it. Stories of hauntings are said to have circulated for hundreds of years, but did not become widely known until they were publicized in the late 19th century in the memoirs of a well-known physician, Sir Walter Farquhar.

Farquhar related how he was once summoned to the castle to attend to the ill wife of the castle’s steward. While he waited in a room, a beautiful young lady in white entered. She was in distress and was wringing her hands. She walked across the room, mounted a staircase, then looked directly at Farquhar and vanished.

The following day, Farquhar was once again attending the sick wife of the steward, when he remarked on the strange appearance of the woman in white. The steward became distressed, and explained that Farquhar had seen one of the family’s Death Omens: the ghost of a lady in white who preceded the death of someone closely associated with the castle. A few hours later, the steward’s wife died.

According to family legend, the ghost is that of a daughter of a former owner of the castle. During life, she supposedly was cruel. As punishment for her sins, she is doomed to haunt the castle. The ghost also allegedly appears outside the castle, luring people into unsafe places where they might have accidents.

Another ghost said to haunt the ruins is that of Lady Margaret de Pomeroy, who loved the same man as her sister Eleanor. Out of jealousy, Eleanor imprisoned Margaret in the dungeon and starved her to death. Margaret’s ghost, clothed in fl owing white robes, is said to rise out of the dungeon on certain nights and walk the ramparts.

A third ghost is that of a woman in a hooded blue cape. By some accounts, she is another Pomeroy daughter, who murdered her baby by smothering it. The baby’s ghostly cries are said to haunt the castle as well.

The ghosts of Berry Pomeroy Castle have particularly grim tales to account for them, which have been printed in several popular books over the past hundred years, the most detailed survey being by Deryck Seymour in 1982. On the battlements of one tower there walks a Lady Margaret Pomeroy, said to have been imprisoned for nineteen years by her elder sister, Lady Eleanor, because they both loved the same man. Deryck Seymour notes that current oral versions are becoming more dramatic, with the hapless victim being starved to death or walled up alive. The name ‘St Margaret’s Tower’ is recorded in John Prince’s Worthies of Devon in 1702, but throughout the nineteenth and twentieth centuries it has been Lady Margaret’s Tower. However, the family tree shows no sisters with the right names. Several compilers of ghost-lore books say the tower is haunted by Lady Margaret; others say it is Lady Eleanor, the wicked sister, who walks. One, Elliott O’Donnell, relates in his Screaming Skulls and Other Ghost Stories (1964) that in 1913 the International Club for Psychical Research were told (at third hand) about a young army officer who saw a beautiful girl beckoning to him from the top of the ruined tower; thinking she needed help, he tried to climb up, but the masonry gave way and he was almost killed in the fall.

One of the ruined rooms is haunted by another, unnamed, Pomeroy girl; she is allegedly a victim of incest who had a child by her own father, and strangled it. In the late eighteenth century, Dr (later Sir) Walter Farquhar wrote an account of how he once was visiting the sick wife of the steward of the castle when he encountered a richly dressed lady who hurried past, wringing her hands in anguish and despair. This, he later learned, was the ghost, whose appearance always portended death; sure enough, his patient died.

The remains of Hadleigh Castle, built in about 1231, once had an eerie reputation. In his History of Rochford Hundred (1867), Philip Benton says that,…