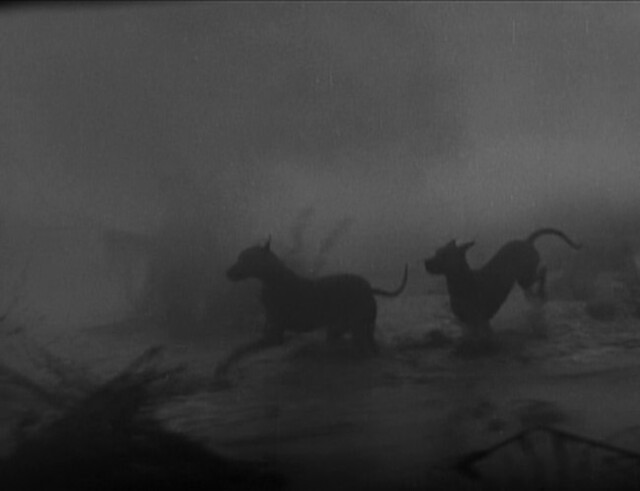 Black dogs are common Apparitions. Phantom black dogs are widespread and sometimes concentrated in particular areas, where they become known by names such as Black Shuck and Snarly Yow. Black dogs are prominent in the folklore of the British Isles, and are also seen in America.

Black dogs are larger than most large dogs, and are sometimes said to be as big as calves or ponies. They often have glowing eyes that are usually red, but sometimes yellow or green. They may be gray rather than black. They seem Demonic, evil, and menacing, but disappear without harming people. If shot, bullets do not harm them. To look into their eyes means certain death within a year.

Phantom black dogs are seen in woods and country areas, and also loping along coastlines. They especially frequent lonely roads at night, sometimes jumping out in front of vehicles, or suddenly appearing in front of a vehicle that cannot avoid hitting them. There is never a body, however, and vehicles are never damaged by impact— even though frightened drivers often hear the sounds of impact and see the dog being hit.

Black dogs are associated with victims of fatal auto accidents, appearing at the accident sites. They are sometimes a Death Omen, an animal form of the Banshee and appear before a person dies. They howl when a person is dying.

Black dogs also have a benevolent side. They protect the graves of persons who have died tragic deaths, and they protect travellers, especially those in lonely areas at night. They guard portions of roads, lanes, and ancient trackways.

In Tavistock, Devon, England, a black dog legend concerns Lady Howard, a real person who lived in the 17th century. The story about her most likely is an incorporation of her into an older black dog Haunting legend.

According to the tale, the Ghost of Lady Howard drives every night from the gatehouse of Fitzford along an old road to Okehampton Castle and back. She rides in a horse-drawn coach driven by a headless coachman, guided by a black greyhound who has one eye in the middle of its forehead. Sometimes she makes the journey herself in the form of the phantom dog.

In West Virginia, a phantom black dog is seen digging in Riverview Cemetery at night. No dog is kept inside the gates, and fences prohibit large animals from digging under to get in.