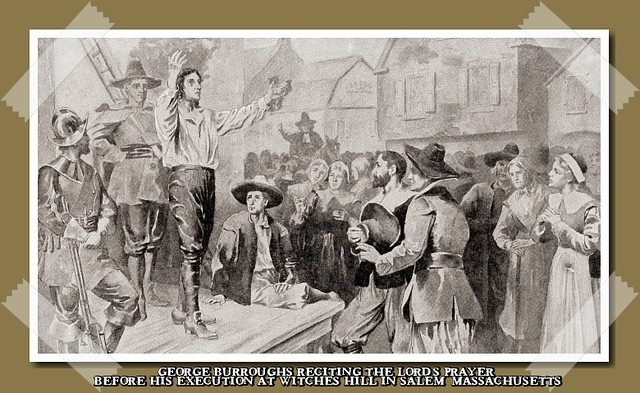 GeorgeBurroughs (d. 1692) Minister accused of witchcraft and executed in the Salem Witches hysteria in Massachusetts in 1692 to 1693.

George Burroughs served as minister of Salem Village from 1680 to 1982. He was a man of good reputation, having graduated from Harvard in 1670. He had distinguished himself as a preacher in Maine, especially in the face of hostilities from Indians. Invited to Salem Village, he had no idea of the hornet’s nest of social and political infighting that awaited him. Not everyone was pleased to have him.

After moving, Burroughs and his wife lived for a time with Thomas and Rebecca Putnam. Later, when the witch hysteria broke out, the Putnams alleged that Burroughs had treated his wife cruelly.

Burroughs’ wife died in September 1681. By then, Burroughs had not been paid his salary for some time, a casualty of the local infighting. He went into debt to pay for his wife’s funeral. Perhaps it was the combination of grief over his loss and frustration at the sentiments raging in the village, but Burroughs decided not to pursue the monies owed him and quit his job. He returned to Maine, where he became a pastor in Wells.

In 1683, a suit was brought against Burroughs for the unpaid debt for funeral expenses. The suit was dropped when Burroughs Demonstrated that the village owed him back salary, which could be applied to the debt. The situation fomented ill will against the minister.

Burroughs was long gone from Salem Village when the witchcraft hysteria erupted in 1692. Burroughs was decried as a witch. Twelve-year-old Ann Putnam said that on April 20 the specter of a minister appeared and tortured and choked her, urging her to write in his devil’s book. She identified the specter as Burroughs. She said he told her he had three wives and that he had bewitched the first two to death. He also said he had killed Mrs. Lawson and her daughter Ann; he had bewitched many soldiers to death; and he had turned Abigail Hobbs into a witch. He claimed to be a conjurer, which was above a witch.

On May 4, Burroughs was arrested at his home in Wells, Maine — while he sat at his dinner table with his family, according to lore — and brought immediately to Salem. In his examination on May 9, he was accused of witchcraft, of not attending communion on some occasions and of not baptizing all but his eldest child. These were grave sins for a minister. Like others who had been cried out against, Burroughs was simply astounded both at the accusations and the girls falling into fits claiming that he was tormenting and biting them.

Putnam said that on May 8, the apparition of Burroughs appeared to her again and told her that she would soon see his dead two wives, who would tell her lies. She saw two ghosts of women in burial shrouds. They said that Burroughs had been cruel to them and had killed them. The first wife said she had been stabbed beneath the armpit and the wound covered with sealing wax. She pulled aside her burial shroud to show Putnam the wound. Putnam also said that the ghosts of Lawson and her child appeared and said they, too, had been murdered by Burroughs. Later, Putnam saw the ghost of Goody Fuller, who said Burroughs had killed her over a dispute with her husband.

Others, including eight confessed witches, came forward against him. Burroughs was a man of small stature but had exceptional strength for his size. It was alleged that his unusual strength came from the Devil, and that he reveled in letting others know of his occult powers, also granted by the Devil. By the time the testimonies were done, Burroughs was the ringleader of all the witches, tempting and seducing them, giving them poppets for evil Spells.

Burroughs was tried on August 5. Found guilty, he was condemned to death by hanging. On August 19, he and four others were driven to Gallows Hill in an open cart. He mounted the gallows and then preached a sermon, ending with the Lord’s Prayer. His flawless recitation of the prayer upset the onlookers, for it was strongly believed that a witch could not say the prayer without stumbling. Cotton Mather, watching astride his white horse, kept the execution on track by telling the crowd that Burroughs was not an ordained minister and, thus, the Devil could help him recite the prayer. The executions proceeded.

Burroughs and the others were cut down and dragged by halters to a shallow hole about two feet deep. Bur- roughs’ shirt and pants were pulled off, and an old pair of pants belonging to one of the executed were put on him. The bodies were barely covered with dirt. Burroughs’ chin and one hand stuck out from the ground, along with a foot of one of the others.

After his execution, more stories of his dealings with the Devil circulated through Salem. The citizens seemed to need a sense of justification at having killed the man who once led their church. Mather made special effort to spread disparaging stories. Filled with loathing of Burroughs, Mathers said he could hardly speak his name and would not have done so except that the state of Massachusetts asked for accounts of the Salem trials to be included in Mather’s book, On Witchcraft: Being the Wonders of the Invisible World.