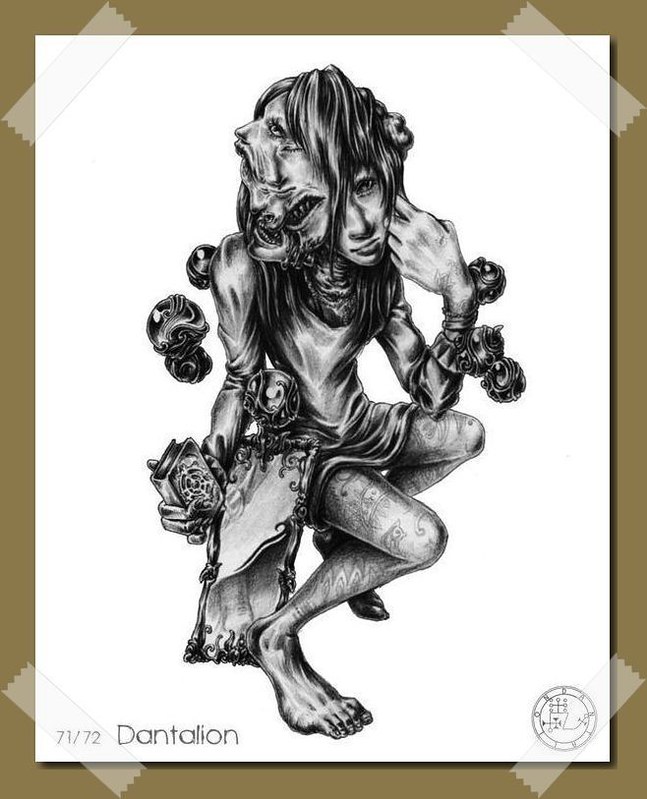 The Demon Dantalion is a Fallen Angel and 71st of the 72 Spirits of Solomon. Dantalion is a mighty duke who appears in the form of a man with many faces of men and women, carrying a book in his hand. He knows human thoughts and can change them at will. He makes people fall in love and can show visions of people anywhere to others.He teaches all arts and sciences. He governs 36 Legions of Demons.

DANTALION. – The Seventy-first Spirit is Dantalion. He is a Duke Great and Mighty, appearing in the Form of a Man with many Countenances, all Men’s and Women’s Faces; and he hath a Book in his right hand. His Office is to teach all Arts and Sciences unto any; and to declare the Secret Counsel of any one; for he knoweth the Thoughts of all Men and Women, and can change them at his Will. He can cause Love, and show the Similitude of any person, and show the same by a Vision, let them be in what part of the World they Will. He governeth 36 Legions of Spirits; and this is his Seal, which wear thou, etc.

“He holds a grimoire in his right hand, which is a grimoire of the high art. Dantalion reveals the secret council or thoughts of others, which in an initiatory context means that Dantalion may provide the magician to begin to understand the common psychology of human thinking based on cause, body language, and such. He can also cause the union of individuals that it may be probable, and a guide to other beautiful places in the world.”

“Helps one relate with others on an emotional level. Teaches emotional intelligence and heightens empathy for others.”

Dantalion is not mentioned here.

Dantalion is not mentioned in the Dictionnaire Infernal.