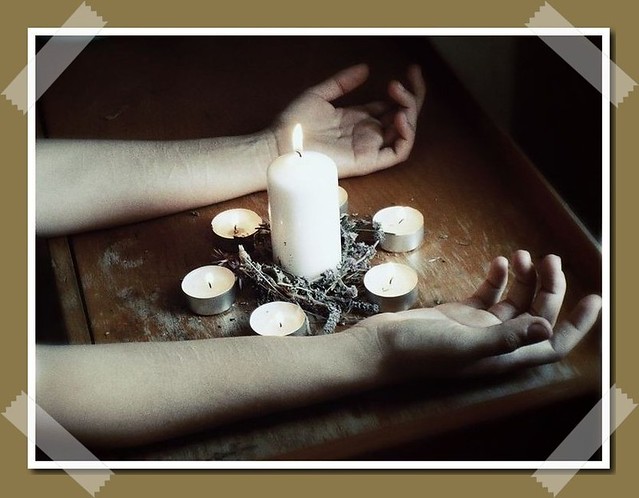 An invocation is an invitation to a spirit, deity, or entity to be present and use its powers to grant requests. Invocations also are called conjurations.

An invocation uses the magical properties of sound, sacred and magical words, and sacred names to align and harmonize the consciousness with spiritual forces. Invocations are carefully composed. To attract a particular deity or spirit, the invocation must address their powers, virtues, and attributes and offer the right praise.

Iamblichus wrote in The Mysteries that invocation is

the divine key which opens to men the penetralia of the Gods; accustoms us to the splendid rivers of supernal light; and in a short time disposes them for the ineffable embrace and contact of the Gods; and does not desist till it raises us to the summit of all.

An invocation must be spoken and not thought silently; both breath and sound carry magical properties. All senses and faculties must be employed in an invocation. Eliphas Levi said that the magical idea of a ritual “must be translated into light for the eyes, harmony for the ears, perfumes for the sense of smell, savors for the mouth, and shapes for the touch.”

Furthermore, an invocation must be spoken or “vibrated” with as much intensity as possible. Israel Regardie noted that the secret of every invocation, as well as every act of magic, is to invoke often and inflame one’s self with prayer.

In magic, an invocation is done during the casting of a magic circle to ask specific entities to be present to protect and witness a ritual. Entities also can be invoked to temporarily possess a person, such as in mediumship, channeling, and trance rituals. Magical grimoires contain numerous invocations, as well as instructions for rituals. Among the most common purposes are procuring love, becoming pregnant, finding treasure or acquiring wealth, protection against enemies, misfortune and evil magic, and healing.

An invocation can be offered privately in which a deity or spirit is invited, praised, and beseeched for favours. The following invocation to Hermes comes from a Greek magical text from Hellenistic Egypt. It invites Hermes to bestow grace, material wealth, and protection against evil magic. It also asks for “might” and “form,” a request for the strengthening and empowering of the ka, or soul. The Daimones mentioned are low-level spirits; the “black dogape” probably refers to the Egyptian god Anubis, lord of death. (Note: There is no verse 5.)

1. Come unto me, Lord Hermes, O thou of many names, who know’st the secrets hidden both beneath the poles [of heaven] and underneath the earth!

2. Come unto me, Lord Hermes, thou benefactor, who doest good to all the world!

3. Give ear to me, [and] give me grace with all that are on earth; open for me the hands of all that give like thee; [and] make them give me what their hands contain!

4. Even as Horus, if e’er he called on thee, O greatest of all gods, in every trial, in every space, ’gainst gods, and men, and daimones, and things that live in water and on earth—had grace and riches with gods, and men, and every living thing beneath the earth; so let me, too, who call on thee! So give me grace, form, beauty!

6. Hear me, O Hermes, doer of good deeds, thou the inventor of [all] incantations, speak me good words!

7. Hear me, O Hermes, for I have done all things [that I should do] for thy black dog-ape, lord of the nether ones!

8. O, soften all [towards me], and give me might [and] form, and let them give me gold, and silver [too], and food of every kind continually.

9. Preserve me evermore for the eternity from spells, deceits, and witchery of every kind, from evil tongues, from every check and every enmity of gods and men!

10. Give unto me grace, victory, success, and satisfaction!

12. Whatever shall befall me in this year, or month, or day, or hour—it shall befall the Mighty God, whose symbol is upon the holy vessel’s prow.

The Great Magical Papyrus of Paris, a Coptic document, contains many invocations, spells, cur ses, and amulet s. The following is a syncretic invocation for the power of revelation. It combines Egyptian and Jewish elements, which perhaps made the author feel more secure or confident about success. The invocation opens with a string of words of power which are intended to call forth the right spiritual properties. Sacred names and words of power are sprinkled through the text. The invocation names Greek, Jewish/Christian, and Egyptian entities: Zeus, the king of gods; the archangel Michael; and Osiris the king of the underworld, t hot h the god of learning and magic, and Anubis:

on the day of Zeus, at the first hour,
but on the (day) of deliverance, at the fi fth hour,
a cat;
at the eighth, a cat.

Hail, Osiris, king of the underworld,
lord of embalming,
who is south of Thinis
who gives answers in Abydos,
who is under the noubs tree in Meroe,
whose glory is in Pashalom.

Hail, Althabot;
bring Sabaoth unto me.
Hail, Althonai, great Eou, very valiant;
bring Michael unto me,
the mighty angel who is with god.

Hail, Anubis, of the district of Hansiesi, you who are upon your mountain.
Hail, goddesses, Thoth the great, the great, the wise.
Hail, gods, Achnoui Acham Abra Abra Sabaoth.
For Akshha Shha is my name,
Sabashha is my true name,
Shlot Shlot very valiant is my name.
So let the one who is in the underworld join the one who is in the air.
Let them arise, enter and give answer to me concerning the matter about which I ask them.
The usual.

In the Western magical tradition, a magician sacrifices his ego to invoke into him a god as a form of divine possession. An experienced magus delivers a spontaneous invocation. Aleister Crowley said that invocations should never be read, for they would lack the proper magical force for the invocation to be successful. See also evocation.