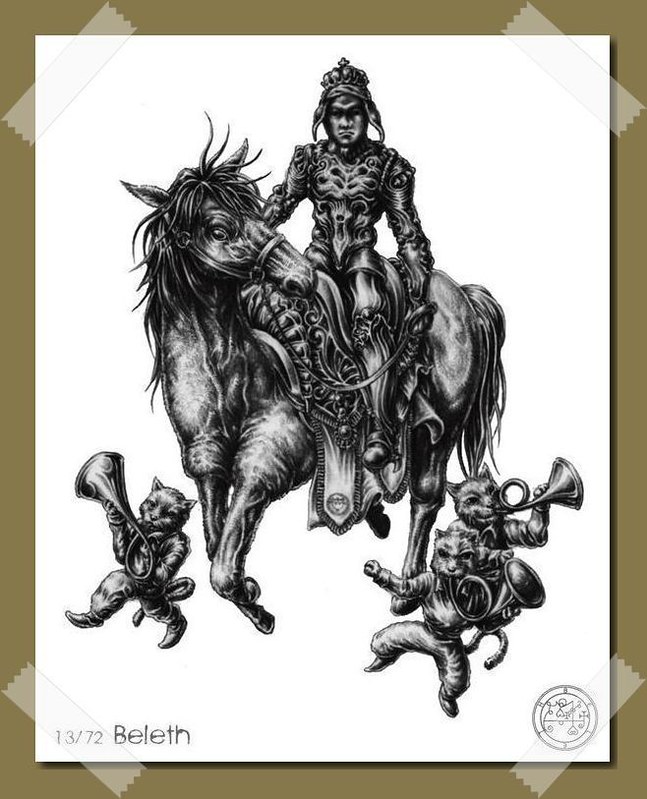 The demon Beleth ( Bileth, Bilet, Byleth ) is a Fallen Angel and 13th of the 72 Spirits of Solomon. In Hell, Beleth is a terrible and mighty king who rules over 85 Legions of Demons.

He once was a member of the Angelic Order of Powers. Beleth arrives on a pale horse, preceded by many musicians playing trumpets and other instruments. He is very angry when first summoned and must be sent to a magical triangle by a magician pointing a hazel wand to the southeast.

He must be treated with great courtesy, but if the magician shows fear, Beleth will forever lose respect for him.
The magician must protect himself by wearing a silver ring on the middle finger of the left hand and holding it up to the face. If Beleth refuses to cooperate, the magician must proceed with his commands.

According to Johann Weyer, a bottle of wine helps to mellow Beleth into cooperation.

Step by Step Instructions on How to Summon Beleth to TRANSFORM YOURSELF in whatever you want to become:

The Thirteenth Spirit is called Beleth (or Bileth, or Bilet). He is a mighty King and terrible. He rideth on a pale horse with trumpets and other kinds of musical instruments playing before him. He is very furious at his first appearance, that is, while the Exorcist layeth his courage; for to do this he must hold a Hazel Wand in his hand, striking it out towards the South and East Quarters, make a triangle, without the Circle, and then command him into it by the Bonds and Charges of Spirits as hereafter followeth. And if he doth not enter into the triangle, at your threats, rehearse the Bonds and Charms before him, and then he will yield Obedience and come into it, and do what he is commanded by the Exorcist. Yet he must receive him courteously because he is a Great King, and do homage unto him, as the Kings and Princes do that attend upon him. And thou must have always a Silver Ring on the middle finger of the left hand held against thy face, as they do yet before AMAYMON. This Great King Beleth causeth all the love that may be, both of Men and of Women, until the Master Exorcist hath had his desire fulfilled. He is of the Order of Powers, and he governeth 85 Legions of Spirits. His Noble Seal is this, which is to be worn before thee at working.

“Beleth/Bileth or Bilet is a King whom appears Mighty and Terrible. Beleth is summoned and manifests upon a pale horse with musical instruments like horns playing near him. He does appear in flames and very angry, the magician even if working with the black mirror will want to silently create a triangle in the South and East Quarters, and command the spirit to take a calm form. When the flames cease, he appears as a King like older man with a long beard. Being of the Order of Powers, he does govern 85 Legions of spirits. Beleth is a useful Love Spell Spirit, whom you would will your desire to become flesh. “

Bileth is a great king and a terrible, riding on a pale horsse, before whome go trumpets, and all kind of melodious musicke. When he is called up by an exorcist, he appeareth rough and furious, to deceive him. Then let the exorcist or conjuror take heed to himself; and to allaje his courage, let him hold a hazell bat in his hand, wherewithall he must reach out toward the east and south, and make a triangle without besides the circle; but if he hold not out his hand unto him, and he bid him come in, and he still refuse the bond or chain of spirits; let the conjuror proceed to reading, and by and by he will submit himselfe, and come in, and doo whatsoever the exorcist commandeth him, and he shalbe safe. If Bileth the king be more stubborne, and refuse to enter into the circle at the first call, and the conjuror shew himselfe fearfull, or if he have not the chaine of spirits, certeinelie he will never feare nor regard him after. Also, if the place he unapt for a triangle to be made without the circle, then set there a boll of wine, and the exorcist shall certeinlie knowe when he commeth out of his house, with his fellowes, and that the foresaid Bileth will be his helper, his friend, and obedient unto him when he commeth foorth. And when he commeth, let the exorcist receive him courteouslie, and glorifie him in his pride, and therfore he shall adore him as other kings doo, bicause he saith nothing without other princes. Also, if he be cited by an exorcist, alwaies a silver ring of the middle finger of the left hand must be held against the exorcists face, as they doo for Amaimon. And the dominion and power of so great a prince is not to be pretermitted; for there is none under the power and dominion of the conjuror, but he that deteineth both men and women in doting love, till the exorcist hath had his pleasure. He is of the orders of powers, hoping to returne to the seaventh throne, which is not altogether credible, and he ruleth eightie five legions.

In the Dictionnaire Infernal Beleth is only ruling 80 legions instead of 85 as mentioned by Weyer.