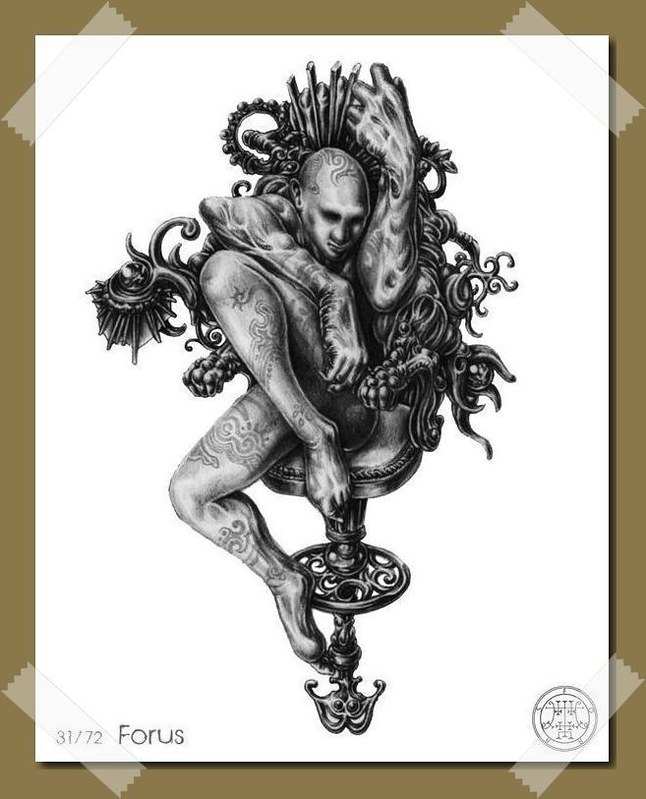 The Demon Forcas is a Fallen Angel and 31st of the 72 Spirits of Solomon. Forcas is a president who commands 29 Legions of Demons. He appears as a strong man or as a chevalier. He teaches logic, ethics, and the virtues of herbs and precious stones. He makes people invisible, discovers hidden treasures and lost objects, and imparts wit, wisdom, eloquence, and longevity.

FORAS. – The Thirty-first Spirit is Foras. He is a Mighty President, and appeareth in the Form of a Strong Man in Human Shape. He can give the understanding to Men how they may know the Virtues of all Herbs and Precious Stones. He teacheth the Arts of Logic and Ethics in all their parts. If desired he maketh men invisible, and to live long, and to be eloquent. Hecan discover Treasures and recover things Lost. He ruleth over 29 Legions of Spirits, and his Seal is this, which wear thou, etc.

Foras, alias Forcas is a great president, and is seene in the forme of a strong man, and in humane shape, he understandeth the vertue of hearbs and pretious stones: he teacheth fullie logicke, ethicke, and their parts: he maketh a man invisible, wittie, eloquent, and to live long; he recovereth things lost, and discovereth treasures, and is lord over nine and twentie legions.