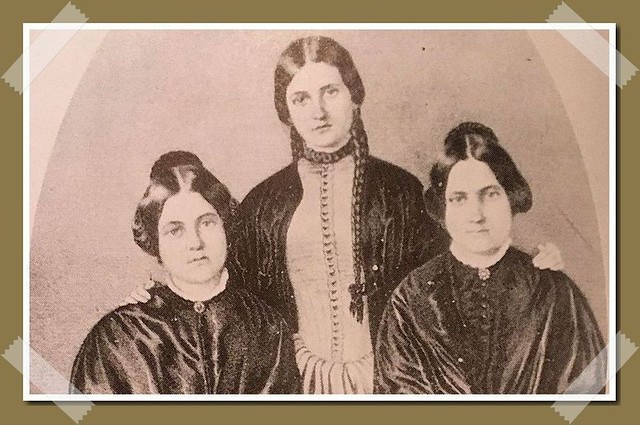 The birth of Spiritualism historically is credited to the three Fox sisters of New York, Margaretta (Maggie), Catherine (Katie), and Leah. Their discovery that they could communicate with spirits by Rappings helped fuel an explosion of Mediumship and belief in Survival After Death on both sides of the Atlantic. They rose to the heights of fame, but their careers ended in disgrace and confessions of fraud.

In 1848, Leah Fox, 34, was living in Rochester, New York, with her daughter in poverty. Her husband had deserted her. Maggie, 14, and Katie, 11, lived in Hydesville with their parents, John and Margaret Fox. The children had been born in Consecon, Prince Edward County, Ontario, Canada, during a time when their parents had lived there. In March of that year, the Fox family in Hydesville was disturbed by strange thumping noises at night. Mrs. Fox believed the noises were made by a Ghost.

On the night of March 31, Maggie and Katie discovered that if they clapped their hands, the raps answered back. Neighbors were summoned to witness this astonishing phenomenon. By rapping for “yes,” “no,” and letters of the alphabet, the spirit claimed to be a murdered peddler named Charles Rosna, whose throat had been slashed by John Bell, a former occupant of the house, who had buried the remains beneath the cellar floorboards. Digging in the cellar yielded some human teeth, hair and a few bones.

The press sensationalized the story. At the time, mesmerism and Swedenborgianism were popular, and provided fertile ground for a new religion to take hold. The opportunity was seized by Leah, who took charge of her younger sisters and their spirit Demonstrations.

The rappings seemed to follow Maggie and Katie wherever they went. In Rochester, the girls held Séances in parlors, contacting other spirits of the dead with their raps. Then, allegedly at the instruction of the spirits, Leah rented a public hall for a stage show, where the girls were mobbed by the curious.

Publicity was intense. Some newspapers denounced them as frauds who played parlor tricks, others hailed them as sensations. People flocked to see them and willingly paid for the privilege.

With Leah as manager, Maggie and Katie toured other cities. They were a sensation everywhere. The Séances grew more elaborate, with objects moving, tables rising, and the spirit of Ben Franklin joining in. Suddenly others began discovering their own mediumistic powers, and Séances became the popular rage.

The Fox sisters were routinely “exposed” by persons who advanced various possible explanations including toe, ankle, and knee cracking, ventriloquism, and assorted electrical gadgets. No trickery was found despite numerous tests.

Circus entrepreneur P. T. Barnum brought the girls to New York City to perform. Despite denunciations from skeptics, they impressed William Cullen Bryant, James Fenimore Cooper, George Ripley, and other literati. Horace Greeley, editor of the Tribune, took them under his wing and provided quarters at his mansion.

But the fame took its toll. By 1855, Maggie and Katie were on their way to alcoholism. Maggie, disillusioned with spiritualism, converted to Catholicism and wanted out of the act, but family pressure kept her in. She fell into a deep depression when her fi ancé, Elisha Kane, a naval surgeon, died before the two could be married. Disapproval by both families had postponed their wedding plans. Nevertheless, she considered herself a widow by common-law marriage, and began using the Kane name.

In an effort to control the alcoholism, the family separated the two sisters. Maggie responded once to treatment, but returned to drinking. Leah abandoned them in 1857, when she married a wealthy businessman and retired from the stage acts.

Katie managed to continue performing, achieving new heights with mirror-writing, or backward automatic script which had to be held up to a mirror to be read (see Slatewriting). In 1861, she purportedly manifested the spirits of the dead in Materializations and may have become one of the first mediums to produce full-form materializations. Her performances were irregular due to drinking. In 1871, she went to England, where she recovered sobriety long enough to impress British spiritualists. Sir William Crookes declared that no one approached her in talent.

In 1872, Katie married an Englishman, Henry Jencken, and she bore two sons. The first, Ferdinand, born in 1873, was hailed as a medium by the time he was three. Spirits reportedly took over his body and caused unearthly light to stream from his eyes. By age five, he did Automatic Writing, penning in Greek, “He who trusts me shall live.” Jencken died of a stroke in 1885, and Katie returned to New York with her sons.

In the United States, interest in spiritualism began to wane, and investigations of fraud increased. In 1884, an ill Maggie was called before a commission and failed the tests. Her enduring reputation enabled her to continue a modest career as a medium in New York.

Leah succeeded in having the Society for the Prevention of Cruelty to Children take Katie’s sons away from her because of Katie’s drinking. The blow was devastating.

In 1888, Maggie and Katie made a public appearance in New York, at which Maggie denounced spiritualism as a fraud and an evil characterized by sexual licentiousness. She confessed that she and Katie had created the rappings in Hydesville to play a trick on their mother, and they were able to do so by surreptitious toe cracking. They had learned to use muscles below the knee which are supple in children but stiffen with age; their practice had kept the muscles fl exible. Maggie Demonstrated on stage how she rapped with her toes. She also stated that Leah had led them around like lambs because she wanted to create a new religion, and that they had rapped at Séances in response to body cues from Leah. Maggie’s denouncement may have been motivated by a desire for revenge against Leah, a stern taskmaster who had Kate’s children taken away on the grounds she was an unfit mother.

Devoted spiritualists hissed and discounted the confession as the ravings of a sick woman. Katie, who did not speak at the public appearance, later said she did not agree with Maggie. Leah maintained a low public profile. Maggie and Katie went on tour exposing spiritualism; Katie also continued to work as a medium. In 1891, Maggie recanted her confession for unclear reasons, perhaps out of guilt.

On November 21, 1904, the Hydesville house finally gave up its mysterious remains, when schoolchildren discovered a skeleton buried behind a crumbling cellar wall. To spiritualists, it was proof of the truth of the Fox Sisters’ beginning, even though the skeleton was not beneath the floor. Critics said the skeleton probably had been planted. The house burned to the ground in an accidental fire in 1955, and it was rebuilt 13 years later as a tourist attraction.

A fascinating story of spirits and conjurors, skeptics and converts in the second half of nineteenth century America viewed through the lives of Kate and…

Rapping is one of the earliest discovered means of alleged spirit communication. Rapping includes any knocking, thumping, bumping or tapping associated with discarnate messages.

It's not unusual for young people to “dabble” in the paranormal-whether it be with Ouija boards, Séances, or what have you. Usually, it's done in…

Florence Cook (1856–1904) was the most famous Medium known for spirit Materializations, especially full-form, but who was exposed as a fraud. Florence Cook was born…