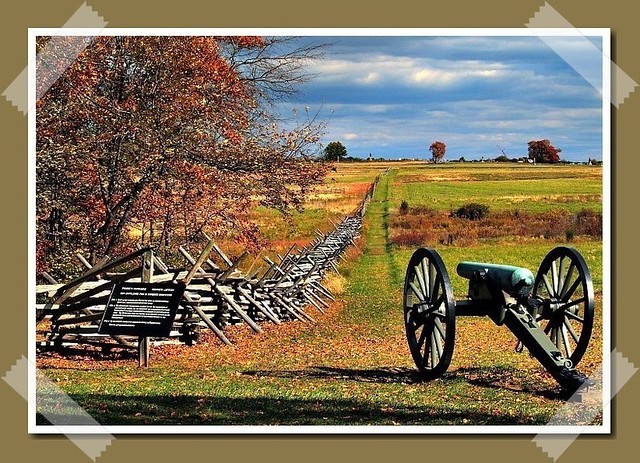 Gettysburg battlefield is the site of the turning point of the American Civil War (1861–1865). The three-day battle at Gettysburg, Pennsylvania, was fought July 1–3, 1863, and was won by the North. Approximately 165,000 men fought and 50,000 were casualties—more than the residents of the entire town of Gettysburg. The battlefield draws more than 1 million tourists every year, many of whom are haunted by phantom sights, sounds, and Smells of the fighting. Civil War reenactors come to replay the battle, and they, too, experience the presence of the past. The battlefield is arguably the most haunted in the United States.

In some respects, Gettysburg happened more by accident than by plan. Confederate General Robert E. Lee was desperate to obtain supplies for his troops—food, shoes, clothes, horses, and fodder. Reports were that those were plentiful in Pennsylvania. Furthermore, driving his army north might divert the Union troops from the Confederate capitol of Richmond, Virginia, and might also enable him to cut some valuable Northern communications lines.

Lee camped his troops outside of Gettysburg and sent a brigade into town to fetch much-needed shoes. Along the way, they met the enemy and were surprised. The Union troops, under the command of General George Meade (who had only been named general a few days earlier by President ABRAHAM LINCOLN), had been moving north from Richmond in search of Lee. Each side wanted to surprise the other. And indeed they did. Neither side had intended to fight at Gettysburg. (Some historians discount the shoe story and say the armies were deliberately looking for each other and met up at Gettysburg.)

The next day, July 1, the fighting began. For three days, the armies shifted and maneuvered in intense fighting in the rocky and hilly landscape. The Union managed to secure a strategic hill, Little Round Top, and fend off several Confederate assaults. Other intense fighting was waged below the hill in Devil’s Den, the Peach Orchard, the Slaughter Pen, the Valley of Death, and Bloody Run, the latter named for the blood of the soldiers that spilled onto the ground and boulders.

At the end of the second day, no significant ground was taken by either side. Meade even contemplated a retreat, though he had 90,000 troops to the 75,000 of Lee.

Day three saw the worst casualties—a literal massacre of Southern troops. Lee decided to assault the center of the Union line and sent 12,000 men across an open field toward Cemetery Ridge, held by the Union troops. Among the leaders of the charge was General George Pickett, who had just arrived the night before with reinforcements. The men were easily cut down by artillery fire from Cemetery Ridge and Little Round Top, but wave after wave kept marching. Only a few hundred of the 12,000 made it to the Union line. Today, the term “Pickett’s charge” is synonymous with a suicidal action. Pickett never forgave Lee for what was obviously a needless slaughter.

On July 4, both sides waited for the other to attack. A heavy rain fell in the afternoon. Lee retreated on July 5, heading back to Richmond. Meade waited several days and then pursued him. Both sides had suffered heavy losses, but for the South, the war was lost as well. There would be more fighting, but the backbone of the Southern army was broken. There would be no more grand confrontations; the South was on the defensive.

Meanwhile, the citizens of Gettysburg—many of them German and Scotch-Irish immigrants—suffered greatly from the battle. Many lost homes and property, for which they never received any recompense. Only one civilian was killed: on day three, Jenny Wade was kneading bread in a brick house on Baltimore Street when she was fatally struck by a stray Confederate bullet that passed through two doors.

To deal with the casualties, the residents turned their homes into hospitals. Schools, churches, and other buildings also became hospitals. Bleeding wounded left permanent bloodstains everywhere. Corpses were stacked in the streets, swelling as they decayed in the heat, some to the point of bursting. Nearly all wounded extremities were amputated, which was the custom of the day, as it was not possible to properly set shattered bone. Surgeons tossed amputated limbs out of windows into grisly piles. The stench of blood, decay, and death was so great that people covered their faces in kerchiefs soaked in perfume and scents such as peppermint and vanilla.

Confederate dead were removed to Richmond for burial. The Union purchased 17 acres of cornfield and turned it into a national cemetery. Interred were 3,654 Union soldiers (1,608 unidentified). Each of the 18 states of the North was given its own area.

Ghostly phenomena have been reported all over the huge battlefield—sounds of gunfire, shouting and screaming, and Apparitions of soldiers. There are sounds of drums, cannon and rifl e fire, horses, music, and campfire camraderie. Many places in the town and surrounding areas are haunted.

According to one story reported by a park ranger, a group of foreign dignitaries toured the battlefield and went to the summit of Little Round Top. There they witnessed what they thought was part of a real-life reenactment: a regiment in full Civil War battle gear doing a drill in the valley below. The regiment marched off into the woods. The visitors were later astonished to learn that no reenactment had been performed, no such group was on the battlefield grounds at the time.

MARK NESBITT, a historian and the leading expert on the ghosts of Gettysburg, proposes that the battlefield and surrounding area may be exceptionally haunted for several reasons. The brain generates electrical energy, and at death—especially violent and traumatic—might send off a tremendous burst of electricity that literally imbues itself into the psychic space or landscape. The Gettysburg soil has a high content of quartz, a mineral associated with hauntings. It is thought that certain geophysical properties, such as quartz, act as batteries to retain energies that in turn manifest as hauntings. Similarly, intense emotions experienced during fighting and dying might also become impressed as imprints.

Among the notable hauntings of the battlefield and area are:

Devil’s Den and the Slaughter Pen.

Confederate sharpshooters hid here to fire upon Little Round Top. The snake-infested tangle of giant boulders and outcroppings of rock was believed to be haunted long before the Civil War, in fact. Residents called it a “desolate and ghostly place” pervaded by an ominous air. The area had been an Indian hunting ground, and lore held that a major Indian battle had taken place there. Phantom Indian cries and war whoops were heard by early white settlers, who also saw ghostly Indian ceremonies at night. Confederates nearly captured Little Round Top, but instead the Union troops turned Devil’s Den into a shooting gallery, picking off the sharpshooters— hence the name Slaughter Pen. After the battle was over, bodies were everywhere in the rock crevices. Some of the Confederate dead were left in crevices and never were buried. Apparitions of soldiers were reported soon after the armies were gone. Such sightings continue into the present. Sometimes figures of men appear in photographs where no one was at the time the photos were taken.

A woman in white is seen here. There is a pre-war legend about a woman who committed SUICIDE over a broken love affair. She may linger here—or it may be other ghostly women who mourn their dead.

Among the haunted houses and buildings are:

This farmhouse outside of town was, like many homes, turned into a makeshift hospital for the wounded. Bloodstains remain on the dining room floor. The Baladerry Inn is now a bed and breakfast establishment. Reportedly, all its rooms are haunted. There is a ghost of a man who has a fondness for blondes in the main house. In the carriage house, there are phantom sounds of heavy furniture being dragged about during the night. Guests have reported mysterious tappings on windows and forms fl itting about the grounds.

Located about eight miles from Gettysburg, this inn was visited by Confederates prior to the battle. The apparition of a Confederate soldier appears here, and footsteps are heard in the attic. The apparition reputedly was caught on film in a photograph taken in the 1890s, which shows the soldier standing near the porch.

One of the largest buildings in old Gettysburg College, this served as a major hospital. General Lee also used the cupola for watching the progression of the battle. Ghostly sentinels still walk the hall’s corridors. Once the apparition of a man frantically waving his arms in the cupola was seen. Phantom cries and groans are heard. One story tells of some college administrators who worked late one night. They got into the elevator to ride down to the first floor. The elevator descended to the basement and opened onto a scene out of time: blood-stained doctors operating on soldiers and orderlies carrying piles of severed limbs to corners to be dumped.

This residence served as a field hospital and burial ground for soldiers from both sides. Many of the dead were exhumed and removed in November of 1963—but hauntings remain. Phantom soldiers, some astride phantom horses, continue their fight around the farm. Glowing apparitions appear around the old gravesites.

A door refuses to stay shut in this small house located on the battlefield and footsteps are heard in the attic.

Lincoln stayed in this house prior to making his famous Gettysburg Address in 1863. The house is in town, in what is now called Lincoln Square. Lincoln’s presence is felt here and sometimes phantom footsteps are attributed to him. The activity is most noticeable in the off-season when the tourist crowds have dwindled and the house is quiet.

Confederate Brigadier General William Barksdale was mortally wounded and brought here. As he lay in the front of the house, he continually cried out for water, even though he was being spoon-fed water at the time. His phantom cries continue to be heard. Shortly after the battle, his widow came to collect his remains and return them to his native Mississippi. She brought along his hunting dog. The dog refused to budge from the grave, even after Barksdale’s body was removed. She left the dog behind. It refused all food and water and periodically emitted mournful howls. Soon it died. Its ghost haunts the area.

Cashtown Inn is a Eighteenth-century inn located in Gettysburg, Pennsylvania, with a long history of haunting activity, dating to possibly the late 19th century. Modern…

Antietam battlefield Site of one of the bloodiest battles of the American Civil War (1861–65) at Antietam Creek, near Sharpsburg, Maryland, on September 17, 1862.…

Gettysburg, Pennsylvania, marks the site of the bloodiest battle of the American Civil War. More than 50,000 men lost their lives in the three-day battle,…