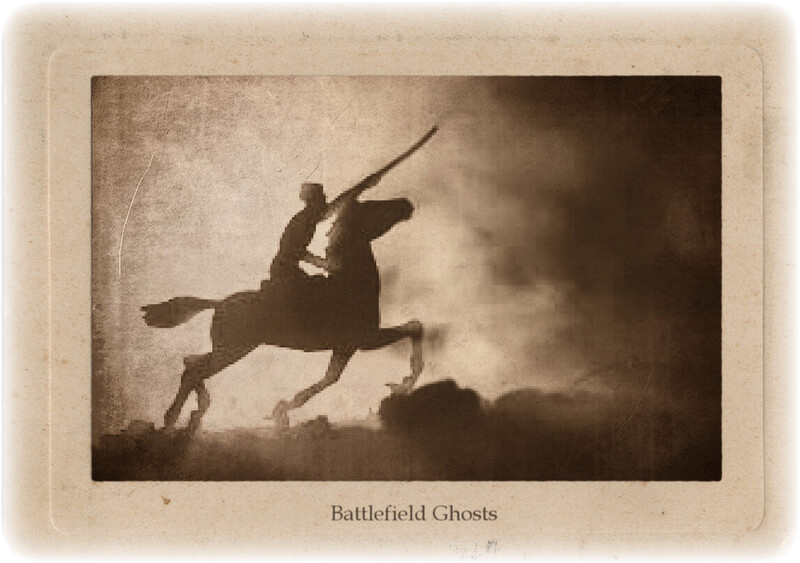 Battlefield ghosts – Places of violence, trauma and intense emotion often are associated with haunting phenomena. Few places have seen more violence than battlefields, and rare is the one not reputedly haunted by ghosts of the slain.

Many battlefield hauntings are residual, a continual replay of fragments of the battles impressed upon the psychic space of place, and are glimpsed by sensitive percipients. It is possible that some ghost experiences in battlefields are due to expectations on the part of visitors who know the places are haunted; yet, the unwary are witnesses too. For example, two Englishwomen were unexpectedly bombarded by the phantom sounds of a World War II air battle when they vacationed in France, in the now-famous Dieppe Raid Case haunting.

Some battlefield ghosts may be the trapped spirits of the dead. The suddenness and violence of their deaths may have prevented their full departure from the earthly plane, or they may not be aware they are dead. People who specialize in Spirit Releasement say these bewildered souls can be helped to move on. Another explanation put forward for battlefield hauntings is Retrocognition, a displacement of time in which one sees into the past to witness it as it is happening.

Ghost investigators who believe that hauntings are caused by the consciousness of the living find a case in battlefield ghosts. The memory of the terror of fighting is deeply impressed into a generation and passed on down through generations through history and possibly through racial and cultural pools of collective memory. Nations and peoples, for example, can be scarred psychically (emotionally) by wars for generations and even centuries. Great wars, such as World War I and World War II, live on in phantoms. The scale of these wars left huge numbers of military and civilian dead; among the military especially were millions of young men whose lives were tragically cut short—the stuff of sorrowful phantoms lingering on the scene of their final moments of life. Often these hauntings fade over time, but many don’t, lasting for centuries and keeping alive the mystery of what is a ghost.

In the United Kingdom, centuries of wars have left their ghostly impact. For example, English Civil War ghosts haunt their battlefields, as do the warriors of medieval fights. More recently, the Battle of Britain against Nazi Germany in World War II created a substantial ghost legacy. Had Britain lost the battle, Germany would have invaded its shores and taken over, and possibly the balance of the war would have been tipped in Germany’s favour.

The Battle of Britain was an air war, and many of the haunted sites are airfields where bomber pilots made their runs. In 1940, Prime Minister Winston Churchill implemented his air strategy, ordering bombing raids against Germany in an attempt to crush it from the air. Every night, bombers lifted off from England, especially from Lincolnshire, which had 57 airfields. The casualties in Bomber Command were heavy: one-seventh of all of Britain’s World War II dead came from losses in the bombing raids; of 300,000 sorties, 9,000 aircraft were lost, 55,000 men were killed, and 10,000 men were shot down and taken prisoner.

Ghost investigator Andrew Green observed that one of the most common phantom sounds is the distinctive noise of Spitfire planes, even though many other kinds of aircraft used the fields. One of Britain’s most famous fighter stations was Biggin Hill airfield in Kent, where radar was developed and installed in planes. Biggin Hill was a favourite target of German bombers. The airfield is haunted by sounds of Spitfires and also of an aircraft plunging downward, a terrible explosion and a deathly silence. The haunting usually is noticed in mid-January, along with phantom sounds of men “in a party mood.” Phantom figures have been seen walking around what was then the runway.

Over the years, eyewitness accounts have changed: the figures have grown less distinct. Once the ghosts clearly were the outlines of men, but by the late 1990s, they were most often reported as “woolly shapes in bulky uniforms,” according to Green. Some ghost investigators say that this metamorphosing of phenomena lends credence to the hypothesis that hauntings are, at least in part, created by the consciousness of the living.

In the United States, there are numerous haunted battlefields of the American Civil War (1861–65). As in other famous battlefields, many of these involved much more than the field of fighting itself: entire towns that were taken over as command headquarters, hospitals and supply posts have been haunted by the remnants and revenants of war, both civilian and military. Reenactors— people who join groups that reenact battles and times of other eras—often report haunting phenomena during their reenactments.

Throughout history, in many different countries, there have been stories of phantom armies haunting battlefield sites. For example, in 490 B.C. a battle was fought…

The print version of this first volume in the “Ghosts of Gettysburg” book series was released in October 1991, and established Gettysburg as the mecca…

On November 20, 1780, a major skirmish broke out between 270 British troops and 1,000 American troops at Blackstock Plantation in Union, South Carolina. The…

Retrocognition is a displacement in time in which one apparently sees into the past, to either experience or review events of which one has no…