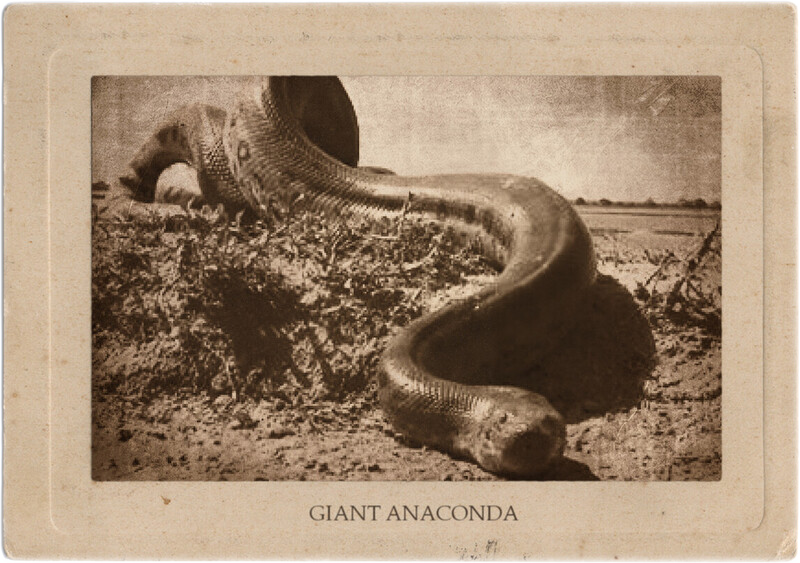 Amazon explorers and local Indians have reported encounters with oversized serpents for over a hundred years. A classic account comes from the colourful Percy H. Fawcett. In 1906, twenty years before he vanished without a trace in the Amazon, Major Fawcett was sent by the Royal Geographic Society to survey the Rio Abuna and Acre rivers. Thirty-nine at the time, Major Fawcett was known for two sometimes contradictory character traits: he was a dreamer whose visionary ideas led him to search for lost jungle cities of fantastic wealth and splendour; he was also a scrupulously matter-of-fact military man who reported exactly what he saw in detailed and down-to-earth observations. His memoirs, striking for their contrast of visionary dreams and earthy frankness, relate many strange adventures—including an encounter with a Giant Anaconda.

It happened in 1907. With his native crew, he was drifting along the Rio Negro when he spotted a great triangular serpentine head appearing at the bow of the boat. Fawcett opened fire, hitting the creature in the spine. In its dying throes the snake thrashed the water all around the boat.

According to Fawcett, the snake measured forty-five feet out of the water and seventeen in it, a total of sixty-two feet. The diameter was relatively small, only twelve inches. Nevertheless, Fawcett had no way to carry the specimen back from the interior, and his sighting has since been viewed as a wild traveler’s tale by conservative zoologists.

An early skeptic, herpetologist Raymond Ditmars, rejected the story on the grounds that anacondas do not get much longer than nineteen feet. Most snake experts now allow for thirty feet. Bernard Heuvelmans, in his chapter on Giant Anacondas in On the Track of Unknown Animals, remarked that the “American herpetologist Thomas Barbour, the great Brazilian expert Dr. Afranio do Amaral of the Institute at Butantan, and Dr. Jose Candido de Melo of the Rio de Janeiro Zoo all agree on forty-five feet.”

In an article in the International Society of Cryptozoology newsletter, J. Richard Greenwell mentions that “the longest measured and accepted length [for an anaconda]—from a 1940s encounter by a Colombian petroleum geologist—is ‘only’ thirty-seven feet, six inches, and even this has recently been questioned.”

Giant Sloths of many varieties lived in South America until ten thousand years ago, according to accepted knowledge. But cryptozoologists from Bernard Heuvelmans to David…

GIANT PANDA The giant panda (Ailuropoda melanoleuca) was not known outside Tibet until March 23, 1869, when native hunters brought a French missionary and naturalist…

Witnesses describe the Flathead Lake Monster, said to inhabit northwestern Montana’s Flathead Lake, as more than ten feet long. Some have reported as many as…

Lake Simcoe, Ontario, is where a monster the locals call Igopogo (it is a play on the popular British Columbia Lake Monster, Ogopogo) supposedly dwells.…