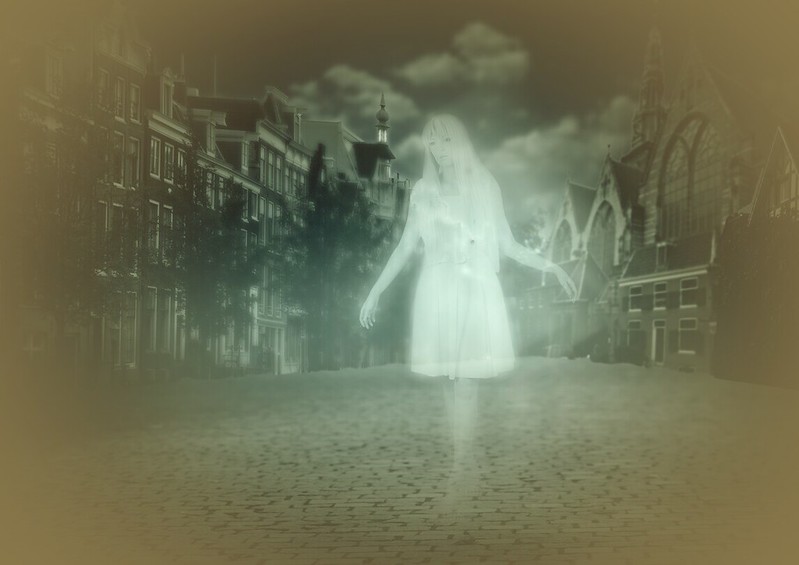 Gray ladies are the ghosts of women who reportedly died violently for the sake of love or pined away from loss of love. Gray ladies take their name from their frequent appearance as women dressed in gray. Some, however, appear clothed in white, black and brown. According to lore, gray ladies haunt a house because of their intense desire to be reunited with a loved one. Their hauntings often are associated with Poltergeist activity.

Gray ladies appear around the world. Many have been documented in England; among them are the following cases. Speke Hall near Liverpool Airport, England, for centuries the home of the Norris family, has a ghost believed to be that of Mary Norris, the daughter of the last male Norris, who died after the Restoration. Mary reportedly was so unhappily married to Lord Sidney Beauclerk that she held her son Topham in her arms and jumped into the moat to end both their lives. Mary’s ghost is said to still rock the child’s cradle in the tapestry room. A woman who died in a shipwreck has haunted Chambercombe Manor, at Ilfracombe, North Devon, since the 17th century.

According to the legend, Alexander and William Oatway were a father and son team who used a lantern on stormy nights to lure ships to the coast. Instead of finding safety, the ships crashed on the rocks and the men would plunder them. Years later, when William was grown and the father of a married daughter, Kate Wallace, who lived in Dublin, he again lured a ship but was surprised by a survivor.

Lying on the rocks was a woman who had been so badly battered during the storm, that her face was unrecognizable. William and his wife took the woman back to the house, but she died during the night. The couple could not resist taking the dead woman’s jewelry and money belt. Two days later, the Admiralty inquired about a missing passenger who turned out to be none other than the Oatways’ own daughter, Kate.

The devastated Oatways walled up her body in a secret room and moved away. More than a century later, the secret room was discovered with the skeleton lying on a bed. The bones were buried in a pauper’s grave, but Kate’s ghost continues to visit the house where she grew up. A few miles from Speke Hall and about seven miles from Ormskirk is Rufford Old Hall, a 15th-century manor house whose resident and anonymous gray lady allegedly died from despair.

Shortly after their wedding, her husband left for war. A soldier told her that her husband was due to return in the near future, but when he did not, the hapless girl deteriorated with each passing day. Her dying wish was for her spirit to remain in the house to wait for her husband. A marriage that never took place was the cause of death for the gray lady of Samlesbury Hall.

The house, located between Preston and Blackburn in Lancashire, belonged to the Southworth family for centuries. Sir John, the last male heir of this Catholic family, had a daughter, Dorothy, who fell in love with the heir of a nearby Protestant family. Despite Sir John’s attempts to keep them apart, the young couple met secretly and made arrangements to elope. Unbeknownst to them, one of Dorothy’s brothers was hiding in the bushes and overheard the designated time and place.

Determined to save his sister from disgrace, the brother hid on the fateful night and killed the young man and two of his friends who were helping him. Their bodies were secretly buried near Samlesbury Hall’s chapel; three skeletons were found there in the 19th century. Dorothy was sent abroad to a convent, where she is said to have gone insane, and shortly after, to have died.

The ghosts of Dorothy and her lover have been seen walking on the grounds and on the road, and embracing on the spot where the young lover is believed to have been buried. Crying and wailing have also been heard. A violent death reportedly produced the gray lady of Heskin Hall, near Blackburn. Heskin Hall often served as a hiding place for Catholic priests during the English Civil War.

During a visit by Cromwell’s Roundheads, a priest was discovered. In order to save his own life and prove his faith to Puritanism, the priest offered to hang the Catholic daughter of the house. It is believed that his offer was accepted and the girl was hanged in front of her parents. Her ghost, often accompanied by strange tappings and bangings, is said to haunt the Scarlet Room.

Other gray ladies are of special interest because of unique characteristics. The white lady of Bolling Hall at Bradford is credited with saving the lives of all the men, women and children of Bradford. The earl of Newcastle had ordered their deaths in retaliation for the killing of the earl of Newport during the English Civil War. The white lady disturbed the sleep of the visiting earl of Newcastle by pulling at the bedclothes three times during the night and pleading with him to take pity on the town.

He rescinded the order the next morning. The gray lady at the famous Levens House in Cumbria, England, was only a passing visitor, never an occupant. The ghost is said to belong to a gypsy who laid a curse that there be no male inheritor of the house until the river Kent stopped flowing and a white fawn was born.

The house’s 17th-century owners reportedly had refused to give the beggar food, and she later died of starvation. The curse was lifted and a male heir was born only when the gypsy’s prophecy came true. Liberty Hall in Frankfort, Kentucky, reportedly is haunted by a benevolent gray lady who does household chores and is seen gazing out a window.

The grey Ladies are a type of ghost, described as “grey” because they tend to manifest in shades of grey. Green Ladies or White Ladies are so described because of the color of their gowns. Grey Ladies don’t necessarily dress in gray. They have been witnessed wearing black, brown, or white; however, when you catch sight of them, especially briefly from the corner of your eye, the first impression is of a gray, amorphous form.

Gray Ladies tend to be the ghosts of women who died for love, either violently or by pining away. They haunt houses and castles seeking to reunite with loved ones. In general, they are not dangerous, although some have been associated with poltergeist-like activity.

The term Gray Goddesses may refer to the Erinyes, the Moirae (the Greek Fates), or the Graeae. See their individual entries for further details.

Some Gray Lady ghosts are famous (at least in the world of ghost hunters and aficionados) and maintain regular routines,appearing on schedule to search for loved ones. Those unable to see them may still be able to feel their presence, which is accompanied by a chill in the air and the sense of overwhelming sadness.

The Green Lady is a type of apparition who appears throughout the British Isles. There are many Green Ladies who may have little in common…

White Lady (1) White Ladies are mysterious apparitions. Some are true spirits. Some are ghosts. In general, what they have in common is their appearance:…

When I was in my early 20's, I moved to a quiet, rural area with my youngest daughter wanting to get away from the stress…