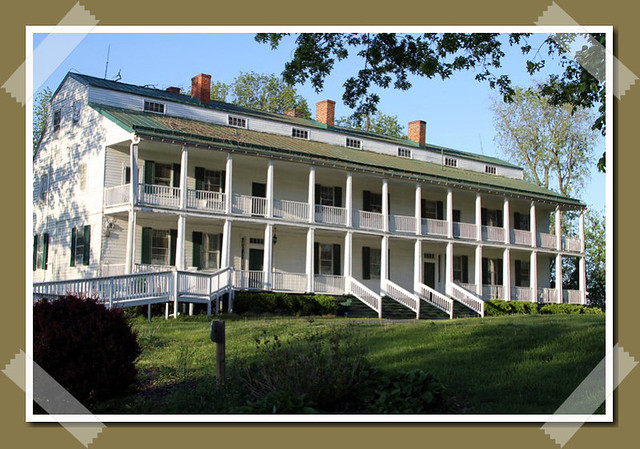 In 1754 along the Rappahannock River in Virginia, the Landon House was built as a silk mill. In 1840, it was relocated to Urbana, Maryland, where it became the Shirley Female Academy and then the Landon Military Academy & Institute. At the time, slaves were commonplace, and the basement was used for their sleeping quarters. When the Confederates marched into Maryland, General J.E.B. Stuart took possession of the mansion. His calvary’s encampment was located in the field adjacent to the mansion.

On September 8, 1862, General Stuart initiated one of the most famous balls to ever take place during the Civil War: the “Sabers and Roses Ball.” The next day, he and his calvary went off to fight in the Battle of Antietam, noted to be the bloodiest single day in American history. During the course of the Civil War, the house served as a hospital for both Confederate and Union troops and still has original signed and dated Civil War sketches on the walls, drawn by Yankee and Rebel soldiers.

Today, the Landon House is on the National Register of Historic Places. Workers and visitors alike believe it to be haunted. One worker witnessed an apparition of a Civil War soldier in 2003. The entity walked in one of the front doors, paused in the foyer, continued up the staircase, and then dissipated into thin air. A direct quote (listed on the Sabers and Roses Website) from a worker in the mansion states: “People feel uneasy about being in the basement of the Landon House. This is where the worst spirits are.

From its days as a military hospital, the dead and the dying are felt in the depths of the basement. There is a feeling like the Amityville House. The dirt floors might still hold buried dead, and who knows what horror lurks from the days when the basement was used as the slave quarters for the mansion.” The West Michigan Ghost Hunters Society (WMGHS) performed a weekendlong investigation of the Landon House in April 2004.

Paranormal activity was experienced in a majority of the rooms, along with the former calvary’s encampment site. Intense temperature drops accompanied with feelings of being watched were both experienced in one of the archive rooms— a room that was documented as being used as the operating room when the mansion was used as a hospital. The basement, which housed the former slave quarters, held extreme feelings of negativity and anger. Unexplained footsteps were experienced in the hallways more than once during the weekend. WMGHS also photographed an abundance of orbs, mists, and vortices during the investigation.

The Grand Rapids Home for Veterans (a.k.a. Michigan Soldiers’ Home) was built soon after the Civil War. While no battles were fought in Michigan during…

On the top of Ferry Hill in Lake Forest Cemetery rests one of the founding fathers of Grand Haven. Rev. William M. Ferry was born…

Yorktown, Virginia, is most famously known as the site where Lord Cornwallis surrendered to General George Washington on October 19, 1781, bringing about the end…

Made famous by Bruce Springsteen, the town of Asbury Park has a history beyond that of Palace Amusements and the Jersey shore. November 15, 1910,…