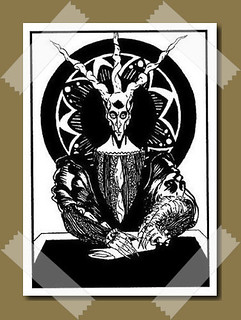 The Demon Lucifuge Rofocale is the prime minister of Lucifer.

Lucifuge Rofocale is featured only in one text, the Grand Grimoire, a French magical handbook of black magic written in the 17th or 18th century (see Grimoires). The book is especially significant for its feature of a specific Pact between a magician and Lucifuge Rofocale for the purpose of securing the services of Demons. Rocofale may be an anagram of Focalor, a Demon named in the Lemegeton, a major grimoire.

The Grand Grimoire states that if the magician cannot master a magic circle and a blasting rod for controlling Demons, then a pact is necessary. A pact cannot be made with the three highest Demons—Lucifer, Beelzebub, and Astaroth—but only with one of their lieutenants. It provides a Grand Conjuration for summoning Lucifuge Rofocale, who is a reluctant and obstinate spirit who must be forced to appear with the use of the blasting rod and threats of Curses.

According to the Grand Grimoire, when Lucifuge Rofocale appears, he demands that in exchange for his services, the magician “give thyself over to me in fifty years, to do with thy body and soul as I please.” After more bargaining that involves threats from the magician to send him into eternal fire with the blasting rod, the Demon agrees to appear twice a night except on Sundays and makes a written conditional pact with the magician. He recognizes the authority of the magician and his grimoire, agrees to grant requested services if properly summoned, and demands certain services and payment in return, on penalty of forfeiture of the magician’s soul: I also approve thy Book, and I give thee my true signature on parchment, which thou shalt affix at its end, to make use of at thy need. Further, I place myself at thy disposition, to appear before thee at thy call when, being purified, and holding the dreadful Blasting Rod, thou shalt open the Book, having described the Kabbalistic circle and pronounced the word Rocofale. I promise thee to have friendly commerce with those who are fortified by the possession of the said Book, where my true signature stands, provided that they invoke me according to rule, on the first occasion that they require me. I also engage to deliver thee the treasure which thou seekest, on condition that thou keepest the secret for ever inviolable, art charitable to the poor, and dost give me a gold or silver coin on the first day of every month. If thou failest, thou art mine everlastingly.

LUCIFUGE ROFOCALE IMPRIMATUR
The reference to the “Book” is the spurious Fourth Book, a grimoire attributed to Henry Cornelius Agrippa. The Grand Grimoire tells how to make a pact with Lucifuge Rofocale, which must be signed by the magician with his own Blood. The magician collects the following tools: a wand of wild hazel (not a blasting rod), a bloodstone, and two blessed candles. He goes to an isolated place either indoors or outdoors—the depths of a ruined castle are ideal. He makes a magic triangle with the bloodstone and enters it, holding his written pact, the Grand Conjuration of the Spirit, the hazel wand, the grimoire, and the discharge for dismissing the Demon once business is concluded. He first conjures Lucifer, Beelzebub, and Astaroth to ask them to send Lucifuge Rofocale for the purpose of entering into a pact. When the Demon finally appears, this exchange takes place: Manifestation of the Spirit Lo! I am here! What dost thou seek of me? Why dost thou disturb my repose? Answer me.

LUCIFUGE ROFOCALE
Reply to the Spirit
It is my wish to make a pact with thee, so as to obtain wealth at thy hands immediately, failing which I will torment thee by the potent words of the Clavicle.
The Spirit’s Reply
I cannot comply with thy request except thou dost give thyself over to me in twenty years, to do with thy body and soul as I please.
LUCIFUGE ROFOCALE
Thereupon throw him your pact, which must be written with your own hand, on a sheet of virgin parchment; it should be worded as follows, and signed with your own blood: —I promise the grand Lucifige to reward him in twenty years’ time for all the treasures he may give me. In witness thereof I have signed myself
N.N.
Reply of the Spirit
I cannot grant thy request.
LUCIFUGE ROFOCALE
In order to enforce his obedience, again recite the Supreme Appellation, with the terrible words of the Clavicle, till the spirit reappears, and thus addresses you: —
Of the Spirit’s Second Manifestation Why dost thou torment me further? Leave me to rest, and I will confer upon thee the nearest treasure, on condition that thou dost set apart for me one coin on the first Monday of each month, and dos not call me oftener than once a week, to wit, between ten at night and two in the morning. Take up thy pact; I have signed it. Fail in thy promise, and thou shalt be mine at the end of twenty years.
LUCIFUGE ROFOCALE

Grand Grimoire This French grimoire was probably authored in the 17th or 18th century. The earliest edition of it bears no date or place of…

Agaliarept: This demon appears in the Grand Grimoire and is named as a general of Hell. He is purported to command the Second Legion of…

[dropcap]A[/dropcap] pact is a binding agreement with a Demon or the Devil for gain and services beyond the power of nature, usually in exchange for one’s…

A blasting rod is according to the Grand Grimoire, a rod or wand used by a magician to control spirits, especially unruly ones. The blasting…

Cursing Demons In ceremonial magic, spirits or Demons who refuse to appear when evoked in ritual may be cursed to burn in fire by the…