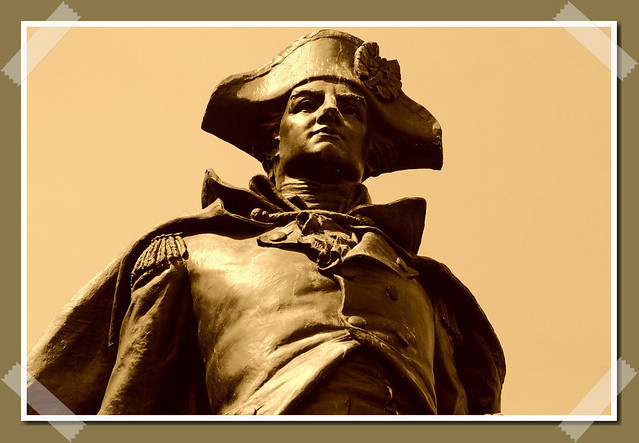 Mad Anthony is the ghost of Major General Anthony Wayne, a hero of the American Revolutionary War, haunts locations in several states in the United States. Wayne was known as Mad Anthony for his ferocity and daring military exploits.

The native Pennsylvanian, in his early 30s during the Revolutionary War, was a key figure in the strategies of General George Washington. He left the army in 1783 as a major general and returned in 1792 as commander in chief. He was charged with defeating “hostile” American Indians as pioneers pushed westward through the Ohio Territory and beyond. Wayne died on December 15, 1796, in Erie, Pennsylvania, and was buried at St. Davis’s Church in Chester County.

One of Wayne’s best-known hauntings is along U.S. Route 1 near the Revolutionary War battlefield of Brandywine at Chadd’s Ford, Pennsylvania. The battle of Brandywine, fought in September 1777, was a victory for British and German forces, who were able to outmaneuver Washington and his men along the Brandywine River. The losses might have been greater for the Continental forces if not for the ferocious rearguard fighting of Wayne and his men, which enabled Washington to escape a British slaughter trap. According to lore, Wayne rode howling into melee, exhorting his men to hold fast. Wayne’s ghost appears here in full army dress astride a galloping white stallion, and then abruptly vanishes.

His ghost also appears at Fort Ticonderoga, where he was commandant in 1771. Wayne was known as a ladies’ man, and he was particularly attracted to two ladies present at one of his dinner parties. One lady was a guest, Penelope Haynes, the daughter of Prescott Haynes, a rich Vermont landowner. The other lady was Nancy Coates, a local woman who served at the party.

Shortly after, Wayne and Nancy became lovers. In time, Nancy set her heart on marrying him, but he successfully fended off her entreaties. Meanwhile, the British were making military advances, and some prominent citizens asked for protection for their womenfolk, among them Prescott Haynes. General George Washington commanded Wayne to bring the women to Fort Ticonderoga.

While Wayne was away on this mission, some people at the fort maliciously told Nancy that he had gone to fetch his bride. When the cavalry returned, Wayne rode at its head, followed by Penelope Haynes sitting on the pillion of a wagon train. Nancy gently touched Wayne’s boot as he rode past, but since he was glancing back at Penelope, he didn’t feel it. Nancy was devastated and fled to the lake where she sat until dawn, and then ended her misery by walking into its waters.

Nancy’s ghost has been seen in and around various parts of the fort, running along the lake paths and even floating face up in the lake. Very often the sounds of a sobbing woman accompany the apparition. Wayne’s ghost is said to appear in the dining room of the commandant’s quarters or is seen sitting in a wing chair before the fireplace. The ghost smokes a churchwarden pipe and drinks from a pewter mug, creating an exact replica of Wayne in his portrait hanging on the room’s wall.

Wayne’s ghost is said to visit Lake Memphremagog. In 1776, Wayne and two guides from Laurentian Canada went searching for a bald eagle’s nest. If caught early and trained, eagles were thought to make good hunting companions. Finding a nest with two bald eaglets, Wayne tried to remove them when one of them raked him across the cheek and the bridge of his nose. He had the scar for the rest of his life. Wayne kept the eagles until they died; he taught them falconry, and they were his constant traveling companions wherever he went.

After Wayne died, his ghost was reportedly seen at the log fort at the lake, which had become a fur traders’ post. Dressed as an Indian scout, Wayne’s apparition would walk along the lake’s shore with one eagle sitting on each of his outstretched forearms. Trappers claimed that Wayne’s ghost crossed the lake with his feet barely touching the water.

Wayne’s ghost also has been seen making a midnight ride on his beloved horse Nab in an assumed replay of what has been called one of the most daring ventures of the Revolutionary War. In 1779, General George Washington commanded Wayne to warn the American troops at Storm King Pass, on the Hudson River, of an impending attack on a nearby British garrison. Wayne and Nab often enjoyed riding through the dangerous, lonely hills. On this night, during a violent storm, Wayne rode Nab to warn the troops and then returned to successfully lead his men in the bayonet attack on Stony Point.

On similarly stormy nights, Wayne’s cloaked ghost is reportedly seen hunched over Nab while darting in and out of the mountain tunnels. The apparition is accompanied by blue and orange sparks made by Nab’s shoes hitting the fl int and from his hide hitting branches. The ghostly pair is even said to be predictive of an impending storm to local residents.

Another Wayne ghost has been associated with a house of which he grew fond. In 1777, Wayne surrendered Fort Ticonderoga to General John Burgoyne. While riding to join General Lafayette in Virginia, Wayne happily anticipated along his route seeing once again a half-built, Georgian brick house that he dreamed of owning one day after a transient life spent in camps, tepees and barracks. The builder and owner of the house, Philip Noland, had made Wayne’s acquaintance and showed him the house.

But 200 years later, the house was inexplicably still in that half-finished state. The ghosts of two Hessian prisoners who had escaped from their nearby camp and hidden in the empty house are said to visit. The men were tracked down there and fatally shot. It is said that their ghosts prowl through the cellar, and they can be heard hitting and scratching on the walls to escape. Followers of Mad Anthony folklore believe that his ghost visits the house. They also envision Anthony’s ghost wondering aloud why Noland’s house remains incomplete.