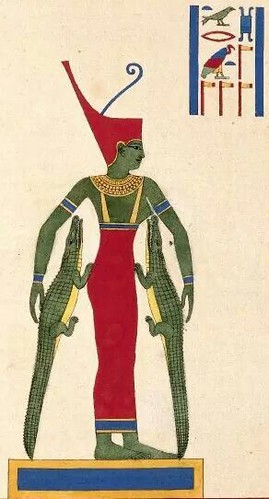 The Oldest One; Nurse of Crocodiles

The inscription on Neith’s temple in Sais in the Nile Delta (now modern Sa el-Hagar) read:

I am all that has been,

that is and that will be

No mortal has yet been able

to lift the veil that covers me

Neith, the First One, primordial goddess, was never born but always existed. Alternatively she is completely self-generated. Neith travelled from the deserts and oases of Libya to emerge as among the greatest of Egyptian goddesses. In one Egyptian creation myth, Neith brought forth Ra, the sun. Then she invented the shuttle and loom, put the sky on her loom, and wove the world into existence. Neith, the first to give birth, invented weaving. Her name may derive from a word for “to weave” or “to knit.”

Neith is a goddess of hunting. She presides over crafts of all kinds, including witchcraft and warcraft. Amuletic weapons placed in the tomb to protect the deceased from evil spirits were consecrated to Neith. She is the judge of the Egyptian deities. After eighty years, when the lawsuit between Horus and Set in the Court of Deities was still not resolved, Neith was called in to render a decision to which all would defer. (She favoured Horus but compensated Set. Neith has historically had a close, positive relationship with Set.)

Neith was worshipped with Mysteries and lantern processions. She may be venerated independently or together with her son, Sobek. The Greeks identified her with Athena, also identified as originating in Libya. Many consider Athena to be a Greek path of Neith or at least a very closely related spirit.

Neith appears as an androgynous woman. She wears the red crown of Lower Egypt. She sometimes appears in the guise of a golden cobra, too.

She is customarily depicted with a green face and hands. Neith is portrayed suckling a crocodile at each breast.

Two arrows and a shield, shuttle

Her primary shrine was in Sais

Serqet (Selket, Selqet, Selquet) In Egyptian mythology, scorpion goddess. Serqet protected the body of the dead. She was often seen on the walls of tombs…

Sebek (Sebeq, Suchos, Sobek, Sebak) In Egyptian mythology, the crocodile god, called Suchos by the Greeks. In Egyptian art Sebek is portrayed as a crocodile-headed…

Ba Neb Tetet The Soul of Mendes; Lord of Mendes; The Ram of Mendes ALSO KNOWN AS: Banebdedet; Banebdjedet ORIGIN: Egypt At the root of…

Osiris Lord of the Far World Osiris, ancient deity, is a culture hero. He invented agriculture: the sacred rites of grain. He taught people to…

Tanit Lady of Carthage; Queen of the Stars; Face of Baal; She Who Nourishes; The Foster Mother; Serpent Lady; Lady of the Moon and Stars…