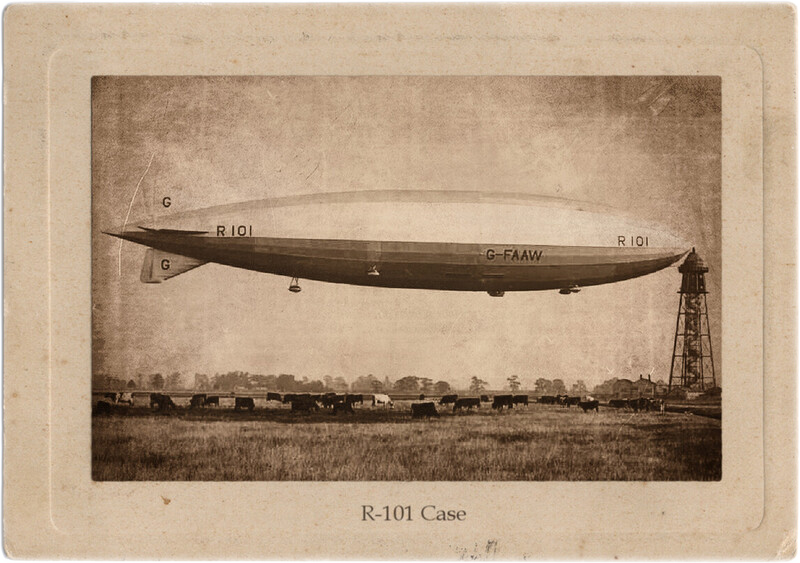 The R-101 Case was an incident involving the famous Irish Medium Eileen J. Garrett, in which spirits of the dead allegedly solved the mystery of a tragic airship disaster, the crash of the British dirigible R-101 on her maiden voyage in 1930. All 46 persons on board were killed. The spirits of the dead crew communicated evidential information through Garrett, thus providing support for Survival After Death. The case had interesting legal implications.

Garrett had several premonitions of the impending disaster years before it happened. In 1926, Garrett was walking her dog in Hyde Park in London one day when she had a vision of a phantom dirigible in the sky. It appeared normal. In 1928, while walking near Holland Park in London, she saw the airship again, only this time it was partially covered by clouds; it wobbled, gave off smoke, was buffeted about and disappeared. She believed it to be a real disaster and was surprised to find no news of it in the press. Meanwhile, the construction of two dirigibles in England, the R-100 and the R-101, was made public. One was to fly to India on its maiden voyage; Garrett was certain it would be the R-101, and that it would crash. Garrett sent a warning to Sir Sefton Brancker, director of civil aviation; Brancker laughed at her. Also in 1928, during a Séance, Garrett gave a message from a deceased Captain Raymond Hinchcliffe warning his friend, Ernest Johnston, the navigator of the R-101, not to go on the maiden voyage because the ship would crash. Johnston did not take the message seriously. In 1929, Garrett saw a third vision of a dirigible in the sky over London, in flames.

The R-101 was declared by Brancker to be “safe as a house, except for the millionth chance.” It lifted off on October 4, 1930 and crashed in France on October 5. Garrett knew about it before the news reached the media. Brancker was among the victims.

Three days after the crash, Garrett conducted a Séance intended to communicate with Sir Arthur Conan Doyle, who had died on July 7. Garrett’s Control, Uvani, began to relay messages from the dead captain of R-101, Flight Lieutenant H. CarMichael Irwin. The specific and technical information about the airship, its testing and flight was of such a confi dential nature that Harry Price, one of the sitters, worried about espionage. He sent a copy of the transcript to Sir John Simon, chairman of the Court of Inquiry, who was heading an investigation of the disaster. When the Séance story appeared in the press, other military officials became interested, including Major Oliver Villiers, a close friend of Brancker.

Irwin allegedly communicated again, joined by several others who had died in the crash, including Brancker, Major G.H. Scott, Wing Commander R.B. Colmore and Ernest Johnston, the navigator. The spirits claimed that the R-101 had had a gas leak that had been ignored by officials who wanted to launch on time. The ship had been too heavy for the engines, which backfired and ignited the escaping gas. Furthermore, the ship had been plagued by other problems: a bad air pump that failed and an improperly functioning fuel pump. The ship had never reached cruising altitude and had scraped treetops as it passed over France. The problems had been known prior to launch, but the decision had been made to proceed. The crew had not wanted to appear “faint of heart,” and had figured that if they made it across the English Channel, they could come down in France and claim that bad weather had forced them to land.

Villiers was convinced he had spoken with the spirits of the dead crew, and he gave information from Garrett’s seven Séances to Simon. Simon said he could do nothing with it, however, as testimony from the dead would never be accepted in a court of law.

Twenty-five years later, Villiers gave another copy of the Séance records to author James Leasor, who wrote The Millionth Chance: The Story of the R-101. Villiers believed the dead crew wanted the world to know the truth of what happened.

The information was not considered in the official inquiry of the crash because of the alleged sources, spirits of the dead.

The Parapsychology Foundation is an Organization founded in New York City in 1951 by medium Eileen J. Garrett. When Garrett died in 1970, responsibility passed…

Eileen J. Garrett (1893–1970) was an Irish Medium, founder of the Parapsychology Foundation (PF) in New York City and a leader in promoting the Scientific…